Media Uproar Over Me… and Santa Claus

RUSH: Let’s get some of the other sound bites. This is Terry Moran at ABC. This is where Nightline says I’m slandering Obama supporters.

MORAN: So how will Republicans react?

RUSH ARCHIVE: Hey, any of you guys in there want to come sit in my chair today? Anybody?

RUSH: They think that the only way they’re gonna have a chance for anything is if somebody comes along and takes from somebody else and gives it to them. Santa Claus. And it’s hard to beat Santa Claus.

MORAN: That old slander, that Americans who support Obama are all somehow moochers and takers, it’s become bedrock belief for many Republicans. 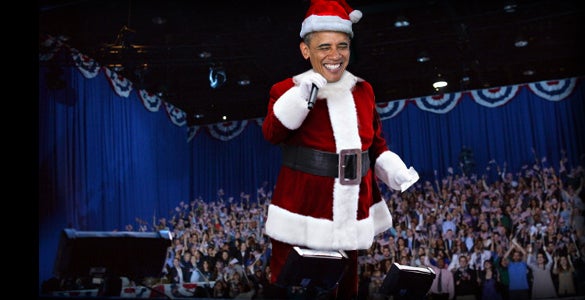 RUSH: Okay, contempt for Obama supporters. Did you hear any contempt yesterday? Slander? I didn’t use the word moochers. This guy did. Look, when Santa Claus visited my house, I didn’t think of myself as a moocher. I looked at it as Santa Claus, that’s his duty. They don’t see themselves as moochers. It’s what they’re entitled to. How many people say, “Santa, don’t show up, I don’t need it.” Everybody accepts a visit from Santa Claus. Why, you’re entitled to it. It’s a national holiday getting stuff on December 25th. With the Democrats, it’s every day. I didn’t call ’em moochers. (laughing)

Okay. Jonathan Karl was on Good Morning America today. He used to be a good guy, but the left has totally co-opted him now, I think. He may still be a good guy. When he was at CNN, we all thought that Jonathan Karl might have been a stealth conservative in there. He’s doing a report about Obama’s reelection.

KARL: Rush Limbaugh almost seemed at a loss of words when describing the Republican defeat.

KARL: Even as returns were rolling in, Sarah Palin seemed stunned.

PALIN: Unfortunately, we know what we will get with four more years of Obama. This really is a catastrophe setback to our economy. It’s a perplexing time for many of us right now.

And here on the Today Show today, Matt Lauer was talking to Haley Barbour. This is just one example of, apparently, what went on all day yesterday, last night, and some of this morning.

LAUER: How do you reach out? I mean, Rush Limbaugh said, “How do we reach out and include more of those people without changing our ideology?” What’s the answer to that dilemma?

BARBOUR: Well, certainly donÂ’t have to change the ideology. Ronald Reagan used to say, “At the end of the day, good policy is good politics,” and good policy on immigration in the United States is: We are in a global battle for capital and labor, and we need to have what is good economic policy for America on immigration because we do need labor. We not only need PhDs in science and technology. We need skilled workers, and we need unskilled workers. And we need to have an immigration policy that is good economic policy.

We’ve got 23 million people in this country out of work! What is this, we need labor? We need subminimum-wage labor. (laughing) I know some of them won’t do farm work. But regardless, the point is, the Hispanic vote… Republicans, if they don’t realize this, it’s sayonara. The Hispanic vote is not tied to the Democrat Party because of immigration policy. It just isn’t it. It never has been and isn’t now.

RUSH: We’re staying with the sound bites just for the levity of this whole thing. Yesterday on this program, I was explaining the outcome as best we had data yesterday. I said, “Either we’re vastly outnumbered and we’ve got serious problems, or this is the greatest theft of an election ever.” It was a throwaway line. To Jennifer Granholm, I accused the Democrats of stealing the election. Here she is. This is on… Well, why the hell are we even watching this for? Current TV? They got an audience of five.

GRANHOLM: Rush Limbaugh, he went even further, saying that there was no way voters could have rejected their poisoned ideology. So the vote must have been rigged.

RUSH ARCHIVE: We’ve suffered a setback, folks, but we have not given up on our principles. And that’s important. Nobody is giving up. But we are facing reality here. We are either outnumbered and are losing ground or one of the most outrageous thefts of an election in the history of elections has taken place.

RUSH: Now, I threw that last line in there because I had a bunch of people e-mailing me thinking that’s what really happened, and I was just trying to acknowledge ’em and make ’em feel better. I have people that really think that. You wouldn’t believe the crap I get every day and have to deal with. I try to knowledge it just keep people happy. I don’t believe it. (sigh) It’s just part of the daily rundown.

Howard Dean wanted to get in on this. He was on NPR’s Talk of the Nation with Political Junkie columnist Ken Rudin, who said, “Governor Dean, when you were the Democrat national chairman, you made a point of making this a 50-state strategy and the reasons it is Democrats did so well in ’06 was because they did well in all these states. Do you think in our lifetime this presidential race will go beyond seven or eight states and the rest of the country can participate in it as well?”

DEAN: If you want to knit the country together, you’ve got to will your ideas to them. That was the whole feeling behind the 50-state strategy. You need to be everywhere. I know we’re not gonna win in Utah any time soon. But if you don’t go out there and show the respect that the people deserve — whether they’re gonna vote for you or not — and be the spokesman for your own ideas instead of letting Rush Limbaugh do it —

DEAN: : — then of course we’re gonna be a bitterly divided country. So I do think the Electoral College has something to do with our divisions, and I’m hoping that that will essentially not be the way we elect presidents after a few more years.

The Republicans didn’t get their vote out.

Why does anybody vote Democrat?

I defy anybody to tell you what it is anyway.