Football as We Know It is Over

RUSH: The left is pervasive, the tentacles of liberalism, socialism are deep into this culture. I’m telling you right now, football as you know it is over. It’s only a matter of time. It’s finished.

When I saw that cover story, TIME Magazine and the idea that no more kickoffs because of injury, that you take the ball on the 30, it’s fourth and 15. Folks, it’s just a matter of time. You start listening to the people talk about the negatives of the game. It creates aberrant behavior. There’s too much drinking. People are shooting people because of the concussions, it’s altering minds. It’s just becoming too dangerous and we as a society are becoming too bloodthirsty in wanting it. And I’m just telling you, I’m giving you a forecast, not tomorrow, I don’t know when, but it’s over. That’s the direction that we are trending. Well, you just sit tight. 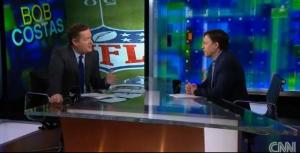 I got a sound bite from Bob Costas coming up.

Dennis Miller earlier this week, you know, he spent a couple seasons in the Monday Night Football booth. He sees it. He says, “This game can’t go on. You might as well just stop it and retool it and start again, because what’s happening is they are starting to make the spectators feel guilty watching this savagery, this potential life-altering injury on every play.” And he’s right. That’s how the left does it. They guilt you into accepting their global warming belief. They guilt you into accepting everything they want. They make you the one responsible. You, the spectators, the fans, you’re the real reason football is the bloodthirsty killer sport that it is, because you’re willing to pay to see people maimed. You’re willing to pay to see the risks these people put into their lives by playing this game. I’m telling you, I’ve seen this for 25 years. I know the left. I know liberalism. I know how they accomplish things.

I can see it on Snerdley’s face. He thinks I’m nuts. I’m exaggerating, maybe misreading this. I’m not. This may not transpire in my lifetime, but I’m just gonna tell you: You are going to see the beginning… Well, you are seeing the beginning of it. You’re seeing the signs of it. In virtually every walk of life. The global warming argument’s a great model. So is the entire subject of environmental destruction. And at the end of the each of these stories, items, topics — at the end of it — is “the fix.”

And the fix is an ever-growing governing body with ever more power to regulate whatever is deemed harmful, dangerous, risky — including capitalism, which is deemed to be the riskiest thing by people. “Why, you’re risking everything you’ve got! Why, people risk everything they’ve got investing in this or investing in that. It’s not something that people should be doing. We need people taken care of so that they never lose anything, so no one gets hurt playing football, so they never get hurt in a car, so we don’t destroy the planet with global warming.

We need to stop eating popcorn so that they don’t get sick and die and put pressure on the health care system. Stop drinking sodas that are bigger than 16 ounces. Stop smoking cigarettes. Stop doing all of it, folks! There’s another fun fundamental to it, too, and that is for all of this to happen, you gotta lose a lot of freedom. You have to give up a lot of liberty in order for all of this to transpire.

COSTAS: I don’t know if it approaches crisis, perhaps it does, but it’s at a crossroads because there’s an issue about the fundamental nature of the game. It’s so popular and so profitable, but it takes a tremendous toll on many of those who play it. Not just body, but as we’re now learning, mind and emotions, and it’s a legitimate question to ask whether, for some players at least, the toll that the game takes — brain trauma, medications that they may take either to enhance performance or deal with pain, all those things, if the culture of the league increases the likelihood of aberrant behavior, it’s possible.

RUSH: The culture of the league increases the likelihood of aberrant behavior, they’re gonna guilt us into taking too much pleasure from watching this bloodshed and these young men destroy themselves, and wait ’til they throw the race angle in there, which will happen, too. I’m telling you, folks, it’s only a matter of time.