Far Past the Entitlement Tipping Point

CALLER: You’re welcome. I’m calling about the sound bite that was played from Sheila Jackson Lee regarding entitlements are not handouts, they are earned.

RUSH: I have that sound bite even here in my formerly nicotine-stained fingers. I got it ready. It’s sound bite 25 on our roster today.

CALLER: I don’t have a problem with people that have paid into government programs like Social Security or Medicare, like my mother-in-law who lives with my wife and I because she’s 76 years old. She has earned her Social Security and her Medicare benefits. But I have a problem with people who receive other benefits such as Plus cards or food stamps. I was explaining to Mr. Snerdley that I work in a local store. It’s my part-time job.

My wife and I both work full and part time, and she and I have both commented recently that people will try and use food stamps to pay for purchases that the food stamps were not originally intended such as cigarettes, candy, soda. There was a big scandal here a couple of months ago. One of our local stores, run in a corner market, was pretty much shut down and had their license taken away because they were selling liquor and cigarettes, and people were using their food stamps to pay for them.

RUSH: So what business…? Wait, wait. What business is it of yours or mine what they use the money for?

RUSH: Who are we to sit here and judge?

CALLER: — to pay for these people that are really not doing anything to earn the benefits that they’re receiving. You know?

RUSH: Man, how cold-hearted can you get? What do you mean? If you’re working two jobs, that’s your problem. You’re the sucker.

CALLER: I love your sense of humor, Mr. Limbaugh. I have to thank you because I’ve been listening to your program for several months. My father was a union worker, and I was raised to be a conservative Democrat.

CALLER: (laughing) It wasn’t easy, but I put myself through college and, you know, I voted for Ronald Reagan in 1980 and was the first time that I voted. With everything that’s been happening over the past year with the state of the economy and the state of the country and Benghazi, I stopped listening to normal news and started listening to you and I’m very appreciative that there’s someone like you out there that can help enlighten people like me.

RUSH: Thank you very much. I’m thrilled there are people like you who accept it and believe it, ’cause it’s true. Here, let’s play Sheila Jackson Lee. We have time to squeeze this in. This is what she said on the House floor. This was Wednesday. 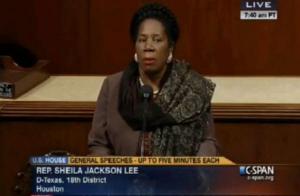 LEE: There is no way, Mr. Speaker, that we should raise the eligibility age for Medicare, that we should not think carefully about how we approach the reform of Medicaid and that we don’t tell the American people that Social Security is solvent. So I would say move quickly to pass the middle class tax cuts that would be for all of Americans, a hundred percent, up to $250,000, and let’s think about moving into 2013, how we make this economy better by looking carefully at how we reform entitlements that are not handouts, but they are earned.

RUSH: Right. So that’s the comment you’re addressing, and you think some of these entitlements are earned, like Social Security. The problem with that, Don, is that we’ve gotten to the point now where people are being paid much more than they paid in. We reached that tipping point some years ago.

CALLER: I would agree. It bothers me because I know, as a conservative myself, anytime I use a credit card or something I receive a statement that tells me where I made my purchases. I can find out from the company exactly what I purchased. It bothers me, especially in the state of Wisconsin, that these cards look exactly like a credit card.

CALLER: There may be some way of tracking the kinds of purchases these people make.

RUSH: Don, you’re still getting the bill. It’s just you don’t see that one. They’re using the card and we’re paying for it, which you know.