RUSH: Folks, we obviously need some safeguards, a congressional committee hearing or something. Did you see what they did to Robert Griffin III yesterday? They let him play. The guy can barely walk. He’s on a knee that’s practically bandaged up all the way to his thigh, he can’t walk, and they kept him in the game. This is inhuman. I can’t believe what’s happening in the National Football League. They better get rid of this warrior culture and turn this game over to people who understand danger and risk so they can take it out of the game. It was absurd what happened.

The Redskins put this guy out there and he can barely walk. And of course he didn’t want to come out because he’s a warrior, team depends on him, but he’s not the guy to make the decision. The last guy to make the decision in a situation like this is the player. Players don’t know what they’re talking about or doing. It’s gotta be up to the commissioner, coach, maybe even Congress. Let’s go to the audio sound bites. Mike Shanahan, coach of the Redskins. This is last night, FedEx Field, after the Seahawks beat the Redskins during a media Q&A. A reporter said, “Does there come a point where you say to yourself, ‘I gotta take this decision out of the player’s hands and I gotta take him out of the game’?”

SHANAHAN: Yeah. I think I do. And it’s a very tough decision. You gotta kind of go with your gut, you gotta go with your gut. I did. I’m not saying my gut’s always right. I’ll probably second-guess myself when you take a look at different — you know, in the second half, should you have done it earlier. I think you always do that, especially after you don’t win.

RUSH: Next up was the player, Robert Griffin III. He had a press conference, of course, after the game as well. He’s talking about playing after he hurt his knee.

GRIFFIN: You respect authority, and I respect Coach Shanahan, but at the same time you have to step up and be a man sometimes, and, you know —

GRIFFIN: You respect authority, and I respect Coach Shanahan, but at the same time, you have to step up and be a man sometimes.

GRIFFIN: And, you know, there was no way I was coming out of that game. I think I did put myself at more risk by being out there. But every time you step on the football field, in between those lines, you’re putting your life, your career, you know, every single ligament in your body in jeopardy. So, that’s just the approach I had to take.

RUSH: See that? Every time you step on the field you’re putting your life in jeopardy. Don’t compare it to crossing the street. That’s not what this is about. I got smart alecks here in the IFB. That’s why they don’t have microphones in there so you won’t be distracted by some of the inane things I have to hear while at the same time hosting the program. Putting life on the line? What are we doing in this culture? Playing a game, a game, they call it a game when the participants are putting their lives on the line and they admit it and they know so? Let’s go back to November 15th in Boston, the Harvard School of Public Health, the commissioner, Roger Goodell spoke. Here’s what he said. 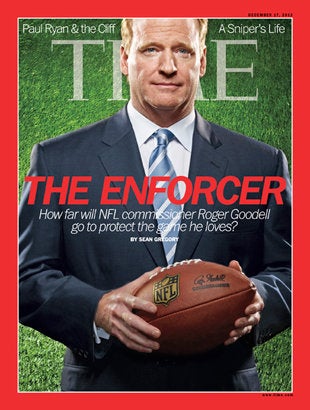 GOODELL: I was recently at dinner with family friends. Their 15-year-old daughter plays field hockey and told me how during a recent game she hit her head on the turf and blacked out for a moment.

GOODELL: She didnÂ’t tell anyone because she didnÂ’t want to come out of the game.

GOODELL: The next day she was diagnosed with a concussion. ItÂ’s the warrior mentality, in a 15-year-old girl.

GOODELL: This is unfortunate, but we are working with players, team doctors, and coaches, to change that culture.

GOODELL: It is changing, but will take more time, resolve, patience, and determination.

Did you see the game yesterday? You watch it? You see the knee buckle on that last snap? So painful, couldn’t even recover the bad snap, Seahawks recovered it. I don’t know. Well, no, it wasn’t as bad as Theismann’s broken leg, but it did, it looked horrible. And it needn’t have happened. Were there federal regulations to prevent that kind of thing from happening — he ought not be allowed in the game. If the coaches aren’t gonna do it, the commissioner isn’t gonna do it, we’re gonna need some guidelines set forth by Congress. It’s the only way we’re gonna stop this and make this game safe. I don’t know about you, folks, but I was ticked off.

RUSH: Let’s start in Tucson with Eric as we go to the phones. Thank you for calling, sir. Welcome to the EIB Network.

CALLER: Rush, thank you very much. At the beginning of this hour when you played that sound bite of the Harvard academic who decried the warrior mentality and how we needed to —

CALLER: Well, my mistake, that makes it even worse, in my opinion. I just got to thinking, if you take away the warrior mentality, I got to thinking about Kerri Strug running down and sticking that vault in the women’s Olympics, winning the gold. I was 11 or 12 at the time, and she stuck that landing with a broken leg, and that was the first time I was proud to be an American, and I was just a young kid.

RUSH: See, and look what it took. You derived pride, pleasure, and entertainment from watching an American woman break her leg for you.

CALLER: It was admiration, Rush, because I knew that that girl worked her entire life to put herself in that position, and she wasn’t gonna let anything stop her. That trickled down to millions of Americans to instill pride and admiration for, not only their country, but for what she worked for. It was just awesome to see. And if you take away the warrior mentality, that would have robbed this entire nation of that moment completely, and there are tons of other moments and other athletes and other examples like that.

RUSH: Maybe so, but she wouldn’ta broken her leg, and we wouldn’t be talking about girls having a warrior mentality and all that. See, people like this guy derive pleasure from the willing pain and suffering of others. What kind of country are we, folks?

RUSH: Folks, without the warrior mentality, we wouldn’t have wars. Dianne Feinstein said we got too much testosterone in the world, and that’s what’s causing all these things. A Yahoo Sports writer says that the reason the Redskins lost is that Robert Griffin lied to everybody.