A History Lesson for Low-Information Voters

CALLER: Couple of points. Number one, I don’t think a lot of people remember it — and for your low-information voters, you probably never knew to begin with — that the very first shot of the Revolutionary War was fired over the Brits trying to confiscate the weapons from the colonists. My second point being — and your previous caller nailed this right on the head. Being as divisive as this president and this administration has been, if they do resort to some sort of, you know, either registration or confiscation, there’s gonna be repercussions.

CALLER: I agree. And one of the things that’s most frustrating is to watch all these talking heads and listen to their explanations or arguments, and 99% of them don’t know what in the hell they’re talking about.

RUSH: I know. Honestly, I — and it’s not just about this issue. I’m stunned by it. Their real level… I don’t mean to be insulting with the term “ignorant.” I know it’s a derogatory term, but I actually mean it as it is defined in the dictionary: Lack of knowledge. The things that they think they know that they don’t blows my mind, and you couple that with the fact that apparently when a conservative is speaking, there is no tolerance or sense of humor for subtlety or double entendre or any kind of sarcasm or parody as a way of making a point.

It is just mind-boggling.

But I think the overarching thing is how little they really are informed, coupled with the arrogant condescension that they exhibit thinking they know everything. It’s a fascinating thing. That’s the biggest thing that I think I’ve gotta keep in mind. I’m just assuming that everybody has a certain baseline of understanding as a starting point. So rather than start an explanation for something, say, at the grade 12 level, I’m gonna have to start in the second grade, when I start making a point. That may be the only way to do it, which is gonna frustrate you because you all are at college level. This is Limbaugh Institute here.

I appreciate the call. Thanks much. 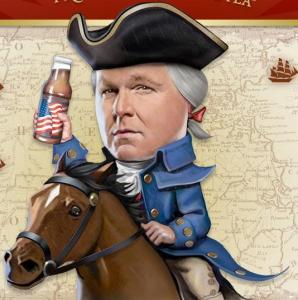 RUSH: I want to go back to something that our previous caller, Mike from Fairfield, said. He said the first shot of war was fired by people to keep their guns. Before Rush Revere made — Rush Revere is the guy on the Two If By Tea bottle. Two If By Tea, that’s our logo and icon, Rush Revere. Before Rush Revere made his famous ride, seriously, the royal government, the British government in Massachusetts wanted to confiscate weapons that the colonists had been storing throughout the countryside. Mike in Fairfield was exactly right. And several attempts were made to do this, but Revere and other midnight riders alerted the townspeople and the weapons were hidden before they could be confiscated.

So this led to the British general, Gage, to come up with a secret plan to go after the weapons at Lexington and Concord in the middle of the night, but Revere got wind of it and made his famous ride. “The British are coming! The British are coming!” was not just a clarion call to war starting; it was a warning that the British were coming to confiscate guns in order to make sure nobody could fire against them. And if you want to read about this, you can go to the oldnorth.com. The Old North Church. But the Rush Revere ride was as much about warning people that Gage and the Brits were coming to get guns as it was to start the war. So Mike was exactly right about it.