CALLER: Hi, Rush. It’s a pleasure to talk to you.

CALLER: You’re the first person I heard. I turned on my radio just a minute ago, and I was listening, and I thought, it strictly is using the kids. They’re there to learn. I understand writing letters is learning, but I’d like to see a few letters from these children, how their homes are changing. Maybe they’re living in their car now. Maybe they’ve lost their home. Maybe their dad is driving two hours to work.

RUSH: Let me tell you why I took your call, Judy. Let me tell you why. Because you don’t know this. That’s why I wanted to take the call so I could tell you. You are thinking exactly as I am. I had a miniature monologue prepared on this very thing today. I look up at the call board, and I see you on the line, and Snerdley has written, “These kids should be writing to Obama to tell ’em their fathers don’t have jobs.” That’s what your point is. Instead of writing about, “I don’t want to die. I don’t want to die. Please take guns out of people’s hands.” How about my daddy needing a job? You are so right about it. Because what are we talking about here? What hurts children.

The regime and the media are joining forces to try to create the notion, and people believe it, by the way, that their children are at risk in school every day. We are subjecting our children to violence and harm, and we must do something. And of course only the federal government can do things. But the truth of the matter is, our children, go to Chicago and talk to them. Speaking of the media, just yesterday or the day before, another 14-year-old, another 15-year-old, black kids killed in Chicago. Where’s the media? Why isn’t the media reporting on this? Is it because it’s black-on-black crime and that isn’t a story?

The teenage death rate by virtue of guns in Chicago is dwarfing what happened at Newtown. We’re talking 500-a-year, minimum, in Chicago. Where is the media? Where is the consciousness raising? Where are the children writing letters from Chicago? Where are those letters? Is Obama receiving them? Does anybody care if it does not happen somewhere in the Northeast? Does nobody care if it’s one or two kids a day instead of 25 or 30 in one day? Does nobody care if it’s black-on-black crime? If white people were shooting the black kids in Chicago, would the media be there? 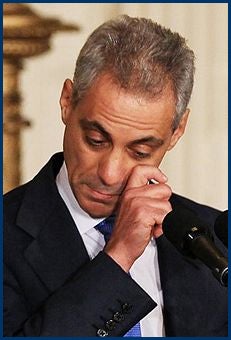 Is it up to me to answer these questions? That’s not gonna dovetail well with my attempt to keep a low-profile. Answering the questions that I just asked about where is the media in Chicago dealing with the gun violence there is not gonna fit well with my low profile effort. It’s not gonna fit well with my effort not to be threatening to people, 24-year-old girls, women. Well, I guess maybe one of the reasons is there is a Democrat mayor in Chicago and we’re not gonna use the media to highlight trouble anywhere where a Democrat runs the show. “Mr. Limbaugh, that is patently absurd. That so silly. I mean, the media is highlighting Newtown, Connecticut, and the Democrats run Connecticut. Obama is a Democrat.”

Wherever you have an absolute societal and cultural mess, the odds are you’ve had a Democrat or the Democrat Party in total control of the place for years, if not decades. They’re simply not gonna go there. Also, black-on-black crime is not a news story. It’s doesn’t advance anybody’s agenda. It doesn’t advance anybody’s narrative. It’s not that those lives are not worth as much. It’s just you can’t blame Republicans for it. You can’t blame the NRA for it. You can’t blame pro-lifers. You can’t blame conservatives for the kind of crime happening in Chicago, so you ignore it because the purpose of news today is to eliminate all opposition to Obama. The purpose of the news today is to find a way to blame Republicans for everything that’s happening. You can’t blame the Republicans for anything happening in Chicago, not without making a huge stretch of things, which takes me back to Judy’s point.

What hurts children each and every day is parents without jobs. And what has the president done about that? Not much. Millions of people have left the job market. The universe of jobs available in this country is shrinking. The labor force participation rate, the number of jobs that exist for people to acquire is down over two million, maybe two and a half million, since Obama was inaugurated in 2009. We’re losing jobs. The private sector where jobs are created is getting smaller because Obama continues to raise taxes and take money out of the private sector. The government is growing. We have run up a $6 trillion new debt to add to the $10 trillion national debt when Obama assumed office.

We’re enriching Washington, DC. Housing and job markets in Washington, DC, are going gangbusters. You want to help children, Mr. President? Turn the energy sector loose. Stop opposing fracking. Get your party off of this quest to shut down fracking. If it weren’t for fracking, I shudder to think where the energy sector or where the economy in this country would be as it is. Help parents. Come up with policies to help parents find good paying jobs. We got 50 million Americans on food stamps. Fifteen million more than when Obama took office. How is that helping kids?

We have more and more fathers nowhere near home. How is that helping kids? It doesn’t. A bunch of young men are growing up without fathers, without any kind of male or masculine influence, none whatsoever, how does that help kids? How is that helping children? They’re worse off. America’s children are worse off these last four years. Now we want to turn doctors into snitches? How’s that gonna cure a sick child?