The Constitution was Written to Guard Against the Ruling Elite

RUSH: Portland, Maine. Paul, I’m glad you called. Great to have you here with us. Hello.

CALLER: Well, thanks for taking my call. I called in because I heard a moment of brilliance when you zeroed in on the ruling elite of both parties, and —

RUSH: I appreciate that, sir. Since the topic of the day is Mrs. Clinton’s brilliance, I’m happy to be so recognized by you. Thank you.

CALLER: I want to make a connection, and I know you’re an intellectual guy, so I’ll try to make this brief. But the theory I have is simply that the ruling elite politically is just a natural extension of what’s happened since the Industrial Revolution and the concentration of wealth in this country. And that, as a people, what we have to do to safeguard our country is to try to spread power without disregarding the benefits of having a ruling elite. 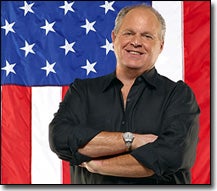 So what happens? The ruling class gets together, they do their hearing and the express purpose here is to try to tell every citizen, insult every citizen’s intelligence by saying, “You’re the ones that don’t get it. You don’t understand. Mrs. Clinton’s the smartest secretary of state we’ve ever had. Her qualifications are unparalleled, and none of you could do her job.” This is all about protecting the reputation of everybody in the ruling class. They have to do it, they have to come out and defend Hillary, protect her in order to protect themselves. But if you just get back to the Constitution, then this can be dealt with and reversed. As I say, it’s a simple solution, but it is very difficult to pull off. ‘Cause the ruling class is the power elite, and they’re just not gonna give it up on their own.