Now, what I don’t know is if it includes the kind of handgun that she used to carry. Did you know that? Oh, yeah, Dianne Feinstein used to carry a handgun. I don’t know if she still does or not. Or the gun that Chuck Schumer carries, I don’t know if her gun ban includes the kind of gun that Chuck Schumer carries. Some people claim — I don’t know this, I can’t attest to it — some people claim that DiFi carries a .357 Magnum revolver for her own personal defense — uh, hunting. She goes hunting. Because, see, if you’re a liberal, the only thing people do with guns is hunt. And they don’t want to stop people from doing that.

“Really? You published the names and addresses of the people that are licensed to own guns.”

“Well, that’s dangerous. People need to know where in town there’s guns so they will avoid them, maybe not get shot.”

“Well, you mean people that have guns in their houses are criminals?”

“Well, I mean, it’s dangerous. Anytime you go by a house where there’s a gun inside, it could go off and kill you.”

“Okay. Then we’re going to publish a list of all the places that your journalists live in town so people –“

“You can’t do that! You can’t publish where we live!”

“Why not? People need to know where journalists live so they can avoid it.”

And, of course, the journalists at this paper, they ended up caving and so forth. They can’t stand it. They can’t handle it when journalism is committed on them. I love it. If you listen to Dianne Feinstein and the liberals, the Second Amendment was written to protect hunters. It’s the only reason that it is there.

RUSH: I have here a list, it’s a partial list. If you’re watching on the Dittocam at Rushlimbaugh.com, just sit tight. Dianne Feinstein announced today all the guns she wants to ban. I want to show you. There they are. That’s the partial list. You can’t read it. That’s the point. There are so many guns banned. That’s just the first page. There’s not much on the second. That’s the majority of it right there. You can’t read it. Don’t try. You can zoom in, I don’t know how the pixelization is going to work for you. But I just wanted to illustrate for you the scope of the DiFi gun ban. 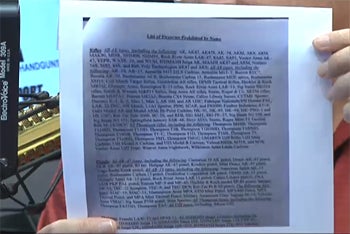 I’ve turned the Dittocam off. I’ll have to zoom back out here before I turn it back on. I’m doing that even now as we speak, because I can multi-task and do things at the same time.

Ken in Charleston, South Carolina. Ken, welcome to the program. Great to have you on the EIB Network, hello.

CALLER: Thank you for having me. A great voice for the American people.

CALLER: Well, police don’t carry revolvers anymore. I would say 95% of the police are carrying semi-automatic handguns that carry 15 rounds in each magazine.

RUSH: I’m sorry, it says here you were going to say that standard police revolvers are being made illegal.

CALLER: Yes. Well, the standard police revolvers, which are revolvers, and I can get very technical, but I know your screeners don’t want me to do, but standard revolvers are basically semi-automatic guns. Because when you pull the trigger, you get one bullet.

RUSH: All that means is self-loading. They’re using these terms here that really scare people. They’re not applicable.