What Took You So Long, Mr. Speaker?

RUSH: Gallup Poll just out, ladies and gentlemen. It turns out we’re not going crazy. You and I are not going crazy. Here’s the headline to Gallup’s latest polling data: “Obama’s Fourth Year in Office Ties as Most Polarized Ever — “During his fourth year in office, an average of 86% of Democrats and 10% of Republicans approved of the job Barack Obama did as president. That 76-percentage-point gap,” between Democrat and Republican approval for Obama, “ties George W. Bush’s fourth year as the most polarized years in Gallup records.” 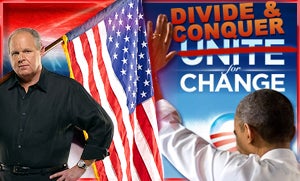 So we’re not going crazy. This is a divided country. It’s as divided as ever. It’s as polarized as ever and it makes me reference Rich Lowry’s column at Politico today, yet again. Because we had all during the 2008 campaign and the last four years, we had people on our side, quote/unquote, refusing to admit, to acknowledge what Obama really is. He’s a pragmatist. He’s a centrist. He’s seeking common ground. None of that. And the people of this country know it, if the ruling class, if the elites don’t. Most polarized presidential approval ratings ever.

Now, that wouldn’t be any big deal just by itself. Well, it would be a big deal by itself, but it’s compounded by the fact that this guy said he’s going to be a big uniter. Is it any wonder this country is roiled? Is it any wonder there’s a general tone of disquietness and upset? No matter where you go in this country people know it’s not right. This is not the way the country has always been. This is not the way we deal with problems. This is not the way things get done. Maybe they can’t put their finger on it, but it’s not right. But then the reaction, what difference does it make? At this point, what difference does it make? I think Hillary Clinton is forever going to regret saying that.

You know that Biden is revving up his presidential campaign right now. He already has his ad ready to go on that, and whoever the Republican is. That line from Hillary, “What difference does it make?” And plus, she didn’t just say it in passing. She was mad when she said it. She was third or fourth wife mad when she said it. What do you mean? What difference does it make?

RUSH: Let’s listen to John Boehner. This is yesterday in Washington. He was at the Ripon Society.

BOEHNER: We’re expecting over the next 22 months to be the focus of this administration as they attempt to annihilate the Republican Party. And let me just tell you, I do believe that is their goal, to just shove us into the dust bin of history.

RUSH: Wow, I wonder what gave him this idea? At any rate, five years into the game the Republicans finally, at least they say they understand what they’re up against now. Obama’s objective has been to obliterate or annihilate the Republican Party from the get-go, because his modus operandi is to eliminate all opposition. That is what statists do. He’s not a small R Republican. He doesn’t believe in a constitutional republic, separation of powers. That bothers him. His whole objective has been to eliminate opposition. From when he first ran for the state Senate, it’s been easy to see. Nobody wanted to admit it, but I guess now they can’t miss it or avoid it. They have to face it. And they are.

RUSH: They asked Jay Carney what he thought about Boehner’s comments, and Carney said, “I haven’t spoken to the president about that, but I know it’s not his goal.” Yeah, his goal is not to annihilate the Republicans. Of course not, Jay, like you’re actually going to admit it.