Ray Lewis: What Difference Does It Make?

RUSH: Ray Lewis at the Super Bowl under a cloud of suspicion. Did you know that one of the fastest-growing organisms, one of the fastest-growing things in all of mammaldom, in the entire mammal world, do you know what grows faster than almost anything? Deer antlers. A certain deer, I could be corrected on this, but I think the specific deer that we are talking about is in Australia. Could be wrong about that, but wherever this deer is, the deer antler grows faster than any other aspect of any mammal ever.

So what’s happened is, a bunch of doctors and nutritionists have been able to isolate the material, element, whatever that makes this possible and they put it in a spray that human beings use under the tongue. It’s called Sublingual. For those of you in Rio Linda, Sublingual, see, the tongue is how we speak, i.e., language, lingual, sub means under. So when something is sublingual it’s under the tongue and that’s because things are absorbed into the bloodstream faster there than anywhere, certainly faster than gastrointestinally. 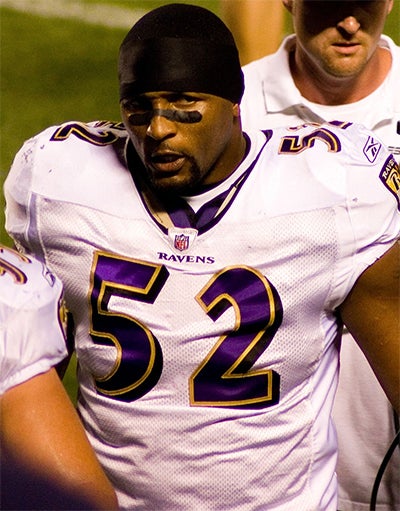 So Ray Lewis is accused of getting this deer antler spray. It’s also in pill form. But the fast-acting stuff, you spray on the skin and you spray under the tongue, and it supposedly acts like human growth hormone, and therefore becomes a performance-enhancing drug and therefore is illegal in the NFL. And Ray Lewis is accused of using it. And so yesterday was media day at the Superdome, and, of course, the media is flocking to Ray Lewis. The first question, of course, was on Atlanta and 2000. The question, “You pled guilty to an obstruction of justice charge in the deaths of two people in Atlanta. What would you say today to the families of those victims?”

LEWIS: I just don’t believe, honestly, that this is not the appropriate time for that. Nobody here is really qualified to ask those questions. I just truly feel that this is God’s time, and whatever his time is, you know, let it be his will. Don’t try to please everybody with your words, to try to make everybody’s story sound right. At this time I just — I would rather direct my questions in other places because I live with that every day. You can take a break from it. I don’t. I live with it every day of my life.

RUSH: Well, it’s perfectly clear to me what he’s saying there. Did you understand that? They’re afraid in there to tell me that they didn’t understand it. What Ray is saying here is that you media twerps are not qualified to ask me these questions. This Super Bowl, this is God’s time, and whatever God chooses is his will, and I’m not gonna try to please everybody with my words or try to make everybody’s story sound right. I just want to direct my questions — he means answers, ’cause he’s not asking anybody anything — I just want to direct my answers in other places because I live with that every day of my life. I don’t know if he means Atlanta or God’s will. So the next question. “Ray, there’s a story in Sports Illustrated that you used banned substances in your recovery, deer antler spray. What do you say to that?”

LEWIS: I’ve been in this business 17 years, and nobody has ever got up with me every morning and trained with me. Every test I’ve ever took in the NFL, there’s never been a question if I’ve ever even thought about using anything. So to even entertain stupidity like that, tell ’em to go try to get the story out of somebody else.

RUSH: All right, so Ray Lewis with a categorical denial that he’s ever used deer antler spray. He’s got a triceps injury that he wanted to come back early from. It’s his last year and he wanted to play in the odds that they made the Super Bowl, and they did so he wanted to make sure he could play. So the allegation is he’s using deer antler spray because it’s a performing-enhancing drug and human growth hormone enhances recovery. He says (paraphrasing), “I’ve been tested every year, 17 years, I never failed a test.” Where have we heard that? We heard that from Lance Armstrong. We heard that from what’s her name, the sprinter, Marion Jones.

Here’s the thing. This is the problem. Well, it’s not a problem. Nothing’s gonna happen. You can only, from what I have discovered, you can only detect deer antler spray — this is important for those of you young athletes out there who are gonna try this, and you know you will. You can only detect deer antler spray in the blood. You can’t detect it in urine, and the NFL doesn’t draw blood for tests. Everything’s a urine test. So it won’t show up. So even if he has been using deer antler spray, there’s no way it would ever show up. This isn’t gonna go anywhere because there’s not gonna be any way anybody can establish, unless the deer gives up the goods.

RUSH: No, the deer antler doesn’t grow as fast as government debt, but I didn’t say that. I said mammal. The government’s debt’s not mammalian. It’s a whole different breed. The deer are from New Zealand, not Australia. It’s a particular deer from New Zealand. The antlers grow faster than anything else in the mammal world, and that’s why the extract from those antlers is sought, because of the recovery time being speeded up in the human body. The substance, after they do their magic and extract whatever’s the active ingredient here, it’s called IGF-1. It’s banned by the NCAA. It’s banned by every major professional sports league, but you can only discover it if you sample blood, and the NFL doesn’t. The NFL just does urine tests, and that’s it. It’s an insulin-like growth factor. Its natural anabolic hormone stimulates muscle growth. It actually comes from the velvet on a deer’s antlers. Yeah, their antlers are the fastest-growing substance on earth because of the high concentration of IGF-1.