RUSH: The Super Bowl’s not just about gay players and what people think about gay players. It’s also about Beyonce. Beyonce showed up yesterday, ladies and gentlemen, at the Super Bowl and she went out there and actually sang the national anthem at the press conference to prove that she can do it, and the reporters melted in the palm of her hands. So over at CNN, low-information news the same as any other news, the similarities between the Beyonce press conference yesterday and the Obama press conferences are striking. I mean, the similarities are striking. Let’s start off with the breathless CNN infobabe introducing Beyonce yesterday afternoon on CNN.

BROOKE BALDWIN: Beyonce walking out. News conference. New Orleans. This is happening right now. I want you to take a good long listen.

BEYONCE: How is everyone?

WOLF BLITZER: The President of the United States will walk out towards the podium over there. Here comes the president right now, so let’s listen.

OBAMA: Please have a seat, everybody. Good morning.

RUSH: Doesn’t matter. Beyonce, Obama, CNN treats them the same. And of course Obama is the Celebrity of the United States. Let’s go back down to New Orleans, the presser. Beyonce, the mother of Blue Ivy, father Jay-Z, had a press conference to talk about her upcoming Super Bowl performance. A reporter said, “We heard you sing beautifully just now –” this is after she sang live the national anthem. “Can you clarify, Beyonce. I mean, the world wants to know, Beyonce. The world is demanding to know why you did it. What happened last week? So many people worldwide are wondering what happened. Do you feel all that attention from the inauguration and the controversy is taking away from your big moment here?”

BEYONCE: I am a perfectionist. And one thing about me, I practice until my feet bleed, and I did not have time to rehearse with the orchestra. It was a live television show and a very, very important, emotional show for me, one of my proudest moments. And due to the weather, due to the delay, due to no proper sound check, I did not feel comfortable taking a risk. It was about the president and the inauguration, and I wanted to make him and my country proud.

RUSH: So there, says Beyonce, telling journalists from AP to, oh, my God, to CBS News to TMZ, they were all there, that she lip-synched the anthem because she wanted to make Obama proud. By the way, last night on Fox American Idol, Zoanette Johnson, Tulsa, Oklahoma, auditioned to be a contestant. In honor of Obama’s victory, Zoanette Johnson chose to sing the Star-Spangled Banner and she ended the national anthem with an out-of-tune attempt at changing octaves — or actually changing keys. She went through a series of dances and stomps, and then had this exchange with one of the judges, Randy Jackson. 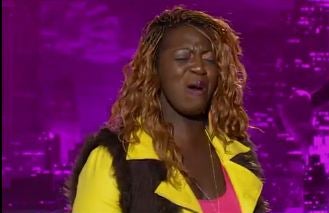 ZOANETTE JOHNSON: I hope Obama. Obama, yo. Obama. Hold up. Obama, you watching this and you don’t invite me to the White House?

ZOANETTE JOHNSON: He better invite me to the White House. Shoot. He needs another Barbie.

RUSH: And there you have it, another contestant, another song stylist trying to impress Obama last night on American Idol. And somewhere in the midst of all of this, they are gonna play a football game Sunday they’re gonna call the Super Bowl.