The Limbaugh Theorem Expanded to the Republican Establishment

RUSH: Robert, Lynchburg, Virginia. Thank you for waiting, sir. You’re up next. Hi.

CALLER: Goodness Rush. That Conservative Action Pack is just what people need. The problem is Republican, slash, conservative brand has been redefined by the Democrats. President Obama when he first started running said he wanted to be as effective as Reagan was at changing our political culture, and unfortunately they’ve done that. They’ve done to us what Reagan did to the word “liberal” in the eighties. Everybody had to run away from “liberal” and say, “No, I’m not a liberal. I’m a progressive. I’m a something else, anything.” Liberal was a dirty word, and now, like you said in the last hour, people love the ideas, but as soon as you say the word “Republican” it’s like saying the word “liberal” in ’85.

CALLER: Exactly. When you’ve got a guy like Mitt Romney is evil, bad, wicked, horrible. I mean, he’s not a conservative, but he’s about the nicest guy in the world, their demonization machine, we’re gonna need a new word other than Republican.

RUSH: What would you suggest? Lapdog?

CALLER: Well, I mean to me, conservatism, I would just use the word “normal.” I mean, getting back to your discussion of families and feminism. I mean, conservative ideas are timeless because they’re just not radical. They’re just normal. I mean, not spending money that you don’t have.

RUSH: You know what? Now, this is very interesting. I can tell you from experience, I have, in describing certain liberal behaviors, I have used the term “normal” as a way of explaining my opposition, and I have been descended on as though I have uttered the biggest obscenity on the face of the earth.

CALLER: Well, they only —

RUSH: Now, let me tell you because you’ve really hit on something. What much of liberalism is is a recognition by many that they aren’t normal and they don’t like it and they don’t want to become normal so what they want to do is change the definition of normal so that it encompasses what they do and who they are and how they go about it.

RUSH: All kinds of liberal behavior.

CALLER: Don’t say you’re wrong, if you do something wrong, then you’ve got to redefine right and wrong so that I’m okay.

RUSH: Well, it’s a touchy thing. Because, you know, I agree with you. It’s like what’s happening with this newly discovered, quote, unquote, feminism. I still have to laugh, folks, I’m sorry to keep bringing this up, but it works here. These women who were hell-bent on becoming like men, career track, to hell with relationships, to hell with marriage, to hell with kids, that’s a prison, I’m going to work. I’m not gonna let anybody dictate to me and I’m not gonna have some relationship be the reason I’m happy, blah, blah. All that goes by the wayside.

What is happening is that nature is simply asserting itself, but there again, you run into big problems, because nature is natural, and that means other things aren’t, and that’s an insult. So nature, normal. I’ve tried both these things. But what is happening? I mean, you say tradition, standards. I know exactly what you mean by saying, “Look, we’re not conservative, we’re just normal.” I’m telling you, people on the left know full-fledged they’re not, and that’s what this is all about. It really is. In practically every liberal pursuit, it’s about the fact that they want to expand the definition or acceptance of what is normal. ‘Cause they know they’re not, in the traditional sense.

I mean, you could almost see how they feel. Who wants to be abnormal? Who wants to be thought of as abnormal? But I still get your overall point. The label is the turnoff, so a new label is needed, or a new branding or marketing campaign to overcome the objection to the label. But here again, it boils down to something else. Why is conservative or Republican a bad name? It’s not because of who the conservative or Republicans are. It’s because of what is said about them. And I think that’s a crucially important distinction, and particularly when Republicans start thinking they have to adjust who they are and what they believe and watering down their principles so that those who are saying things about them which aren’t true will stop saying them. They’re defeating their own purpose.

If Republicans were genuinely falling off the right path, then they could be maybe blamed for some of these things. But people who aren’t, who are just falsely accused, falsely impugned, mischaracterized, make the mistake assuming it’s who they are that’s the problem and what they believe that’s the problem, when it isn’t at all the problem. The problem is what is said about them that is lies and untruths and goes unrefuted. 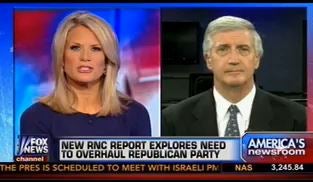 Just like whatever’s happening to the country, Obama’s not running it. It’s an amazing phenomenon! These guys attack policies that they have contributed to: Amnesty, debt, growth of government. I mean, let’s admit it. The Republicans have done their own big spending. They don’t seem to be pushing much of spending cuts. They’re letting Obama have what he wants here, but they claim all the while to oppose all of this. Now, don’t misunderstand. I’m not saying these guys are the same as Democrats.

They’re not the same as the radical left.

But I am saying that, in many parts, they’re not taking responsibility for what’s happened. They go out, they lose elections, and they blame everybody else! They’re running the party. We’re not. Safe to say? I mean, they’re getting the nominees they want and they’re losing, and somehow it’s our fault for being “exclusive”? We’re not excluding anybody! You know, the Republican elites are the same as the Democrat elites, and they set up these straw men, and they try to act like everything they’re doing is not their doing and not their responsibility.

So when we as conservatives say, “Enough is enough! There has to be at least one political party that represents liberty and property rights and the rule of law,” the establishment in the party lashes out and calls us extremists and then starts complaining that the party isn’t a big tent. All we’re talking about is constitutionalism! Now, don’t misunderstand. I’m not accusing them of being Obama, but there are similar traits here as applicable to the Limbaugh Theorem. I will expand on this tomorrow.

I have my little notes I jotted here off to the side, and I’ll expand on ’em.