Low-Info Outreach: Beyonce and Me

RUSH: This Beyonce thing has just blown way out of proportion. Normally, I would let this go. It’s pop culture, but, as you know, we’re in the middle here of a vast outreach to low-information voters and this is right up their alley. It is a golden opportunity here. You’re just gonna have to trust me on this. Stick with me on this. I’ll try to get through this as quickly as we can. It isn’t health care. It’s not Obamacare. We’re not going to be talking about any of that. We’re talking about what low-information voters are talking about today.

As you know, the day before yesterday, maybe it was yesterday, I forget which, a UK newspaper story came out ripping Beyonce and her new song, album, whatever it is, called Bow Down, B-I-itches. The criticism was now that Beyonce’s married, now that she’s got the rich guy, now that she’s got the home and the kid, now it’s okay to bow down to the guy. During the Destiny’s Child days it was, “Don’t bow down to any man. Don’t bow down to any guys. You stand up for yourselves, girls,” and all that. It wasn’t me who had that analysis. I haven’t heard the song. I’m deaf. I can’t hear it. I can only read the lyrics. I haven’t heard it. I only read the analysis.

Now, what has happened is that there are people, since I got into this — see, I’m not allowed in pop culture. This is the same thing as when I went to ESPN. I’m not allowed there. The Drive-Bys do not like me venturing outside of my own area of expertise. So if you’ll look carefully today, you can find stories, New York Daily News and elsewhere, where I’m the biggest boob on the face of the earth. I do not know what I’m talking about. It’s not about bowing down to men. It’s Beyonce saying bow down to other female singers, that they are nowhere near as big as she is and they should bow down to her because she’s the queen. That analysis has sprung up simply as a way of making me look like I don’t know what I’m talking about, when I never offered the opinion in the first place. All I did was hold up a mirror and the left saw themselves in it, didn’t like what they saw when they saw themselves, had to start blaming me.

But here’s from The Root DC Live section of the Washington Post: “Beyonce Sabotages Her Female Empowerment Efforts With ‘Bow Down’.” That’s exactly what I said. Skip Gates is saying it. A couple of other of Beyonce’s contemporary singers are saying it. But because I’m joining the chorus, it can’t be right. I’ve got to be wrong here. They are not going to allow me into pop culture. They are not going to allow me access to low-information voters. They are afraid of that. So there are all kinds of efforts out now to discredit me on this Beyonce story which, between you and me, I could give a rip. But it’s all part of the low-information outreach. Just hang with me.

RUSH: Let’s go back and let’s listen to these TV clowns on Channel 11 in Houston. This is last night. The guy’s name is Greg Hurst, and he’s part of the chorus that said I didn’t know what I was talking about in my analysis of the Beyonce song.

HURST: (music) Why Rush Limbaugh’s having to eat his words after taking Houston’s own Beyonce to task over her new single. … Beyonce’s been taking heat over her new single Bow Down, but one of her critics maybe should have done his homework. Rush Limbaugh said Beyonce used to inspire women, but that her new song takes a 180 by telling women to bow down to their husbands. The problem is Beyonce was really telling people to bow down to her, because her song is apparently targeted to other female singers who tried to take her place.

RUSH: That doesn’t say much about her, either, does it, Mr. Hurst? I mean, here she is at the top of the roost. You’re not supposed to be disrespectful of the young women you should be mentoring, telling them to bow down to you. But anyway, it wasn’t my take; it was the take first off of a UK newspaper writer and then a singer, Keyshia Cole, or whatever, and then Skip Gates at Harvard, from The Root DC Live section of the Washington Post: “Beyonce Sabotages her Female Empowerment Efforts with Bow Down.”

So I would just suggest to you, ladies and gentlemen, not only am I probably the father of chop and screw — and by the way, how about the Houston Oilers Number One Song? Keyshia Cole. Keyshia Cole is the singer and she was the first one to start to rip into Beyonce for being this way, for doing her 180 announcing, “Okay, gals, time to bow down to men,” or what have you. It wasn’t me. I’m reporting what the pop culture analysts were saying. But, again, when I enter that arena, they don’t like it. So even if Beyonce is still telling women to bow down to her, is that better?

However way you want it. It’s up to you.

RUSH: Let’s go to the Today Show earlier today. In the third hour the co-host Natalie Morales and a fill in co-host Jason Kennedy are talking about the Beyonce song in which, well, as I mentioned yesterday, she’s starting her big new world tour, Mrs. Carter’s World Tour is the title of the tour, not Beyonce On Stage or anything, but Mrs. Carter World Tour. Anyway, here’s how this whole thing happened. They actually discussed it throughout the Today Show, but I just want to play one bite because we’ve got other things to do. But just to illustrate the third hour of the Today Show.

MORALES: As you know, Rush Limbaugh… 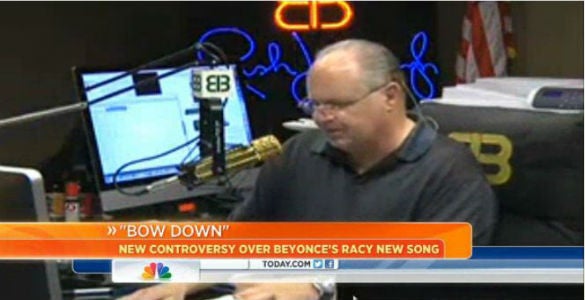 KENNEDY: Rush Limbaugh. He slammed the song and I think many people — a lot of insiders are saying that his attack was misguided. It’s not about Beyonce bowing down to men. It’s quite the contrary. It’s people bowing down to her because she’s at the top of the game right now.

MORALES: What he said was apparently that, you know, she married a rich guy and she understands now it’s time to bow down, and he’s like, “Well she’s the one who is all about women empowerment and now she’s done a complete 180.”

MORALES: But she says, “I took some time to live my life, but don’t think I’m just his little wife.” Some people are saying he just took the title of the song and just completely read into it the wrong way.

KENNEDY: Keyshia Cole slammed her as well, and she’s in the rap game.

MORALES: She does look gorgeous, though.

RUSH: Which is all that matters in the end, isn’t it? She looked gorgeous. Again, I simply was repeating what was in the pop culture about the song. I held up a mirror, they saw themselves, didn’t like the fact I was the one holding up the mirror.