Democrat Hypocrisy on Syria and Iraq

RUSH: I got a note from somebody. I’ll run this by you and see what you think. “Rush, I think you are making a mistake in calling out Obama on his hypocrisy or the contradicting things based on what Obama said about Bush in Iraq, what Kerry said about Bush in Iraq, versus what they’re doing and saying now. Rush, the correct thing is that Obama has finally learned the way the world works.”

I’m not that charitable.

I think he knew how the world worked. I find it difficult to believe that Obama is just now learning how the world works. See, I don’t buy this incompetence bit, foreign policy or otherwise, with Obama, at all. I don’t think that in 2002 and 2004 when he was accusing Bush of lying and when he was accusing Bush of going into Iraq as a distraction and so forth, it’s hard for me to accept that Obama really believed all that back then.

It was not just being politically in opposition.

RUSH: So I got this e-mail from a friend who thinks I’m really off base on judging Obama on foreign policy. It’s about Syria and Obama drawing the red line and Syria apparently has crossed it, and the media is doing everything they can to cover the gaffe. Meanwhile, the rest of the world is watching, and I don’t think there’s any other way to conclude. The rest of the world…

This is probably gonna offend some people. I know it’s gonna offend people in the media. If you ask me, if you look at what happened to Libya, if you look at closing 21 embassies, if you look at now Syria, it is obvious to me that the people who are our enemies (the Iranians, throw them into there) have got to realize that the guy in the White House… I don’t want to use the word “patsy,” but, man, it’s close.

The thing about this, the Syria argument, is I made the point earlier in sound bites that Obama and Kerry and all these Democrats are a bunch of hypocrites. Back in 2002, they were all accusing Bush of going into Iraq as a distraction because the recession was occurring and the economy was not that good and coming out of 9/11, and they were trying to paint the picture of Bush as an incompetent buffoon.

He was a stupid, dangerous, reckless cowboy. They were claiming that Bush didn’t have any idea what he was doing. He was very, very dangerous. What was really happening back then in 2002 was that Bush did everything these guys are not doing in Syria. He went to the UN, he got a coalition, he put together partners. He went to Congress and got a use-of-force authorization. None of that has happened here. None of it!

In fact, in 2002, there were two use-of-force authorizations, because the first one the Democrats didn’t all vote the “right” way on it. Public sentiment in 2002 was, by a vast majority, in favor of retaliating for 9/11. Iraq didn’t start ’til 2003, but Bush was selling it in speech after speech, and the American public supported it. Well, the Democrats thought they were gonna win the 2002 midterms by opposing it all.

They found out they were on the wrong side. The Wellstone memorial backfired on ’em, and they lost big in the 2002 midterms, and they wanted a do-over on the use-of-force authorization, and they got it so that they could be on record as being on the same side as the American people. Even after that, it didn’t take long before they were trying to destroy Bush on lying to them and misleading them, not just about weapons of mass destruction, but on everything.

They were ticked off about the Florida aftermath, the recount from the 2000 election. They were upset at the Supreme Court for stopping the recount. They thought Gore should have been president. They were just livid. I mean, they were so mad, they were insane to one degree or another — and their hatred for Bush was boundless. But yet they still wanted to be on the right side of that use-of-force authorization.

So Bush gave ’em a do-over. He gave ’em a second vote and they voted for it and it was after that they then, including Hillary, all started acting like they didn’t sign it or that they were lied to and that Bush didn’t tell with he was gonna do any of this. It was just amazing, and now they are at least making noise about going into Syria because of Assad’s crossed the red line here with chemical weapons.

“He couldn’t really been a hypocrite.” I thought, “Now, wait. I’m having trouble buying that. I did not think that Obama or the Democrats were anywhere near that naive. Remember, now, this is after 9/11. This is after Al-Qaeda, which is militant Islam. How in the world can these guys, particularly Obama, be that ignorant of the way the world works? They’ve been educated and all that.” So my friend refuses to stand down on this, and I get this note.

“I think Obama didn’t know how the world works, or who he was dealing with, back in the early 2000s. He didn’t have any professional experience in foreign affairs. Being a child in Indonesia or having a Pakistani roommate doesn’t count. What he did have was an anti-imperialist America worldview shaped by his professors, most notably Edward Saied of Columbia, the black liberation church, and European elites — all of which David Axelrod translated into political tools.

The Nobel Committee gave him the Peace Prize because they assumed that he was the Prince of Peace and that the world was going to become a place of peace just because he lived. Now, my question to you is: Do you think Obama really bought that? Do you think Obama, in his real world… Let me put it this way: I have enough humility that if I were president but I hadn’t done anything yet, and the Nobel Committee gave me a Peace Prize, I would know something’s not right here.

I wouldn’t take it seriously because I haven’t done anything. Do you think that Barack Obama is so lost in this messianic economics that he got the Nobel Peace Prize and really thought it was because of some great achievement, or did he know that he was pulling a fast one on everybody? Did he know? Does he sit there and laugh about it? Is he sitting in private laughing with Axelrod, “Can you believe how we’ve got these people buffaloed?

“Look at what they gave me, the Peace Prize, and I haven’t done diddly-squat yet!” or is he sitting there demanding that Axelrod and everybody kiss his feet. “Look at how great and wonderful I am! I got the Peace Prize because they know how great a man I am”? Which is it? (interruption) I do, too. I think he knew he bamboozled everybody. I think he’s sitting there laughing himself silly with it, feeling very good about it. If it’s the other?

If he actually hasn’t done diddly-squat other than get elected, all he’s done is replace Bush who everybody in the world hated — if all he’s done was replace Bush and all he did was get elected — and he’s actually sitting there thinking that, you know, his stuff doesn’t stink — we’re dealing with a really… Well, that is either way. I probably wouldn’t have accepted it. He did. So I don’t know. Here’s the rest of this e-mail:

“What Obama had was an anti-imperialist America worldview shaped by his professors, most notably Edward Saied of Columbia, the black liberation church, Reverend Wright, and European elites which David Axelrod translated into political tools. Then Obama gets a Nobel Prize, so he must have thought he was on to something. Unfortunately, the radical Muslims in the Middle East, who are expert America watchers, saw was a puffed up patsy. 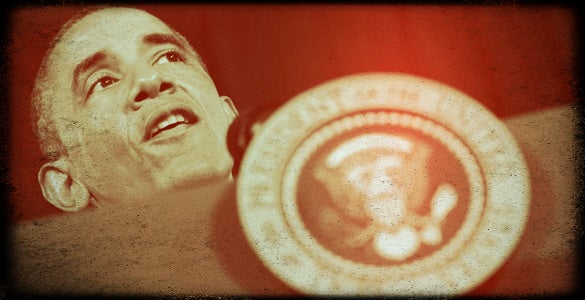 “So he ends up getting Libya, Egypt, the Iranian nuclear program, the growth of Al-Qaeda. Now he’s got Syria and whatever else comes next.” In other words, the radical Muslims in the Middle East are looking at a buffoon, and while Obama is up there strutting his stuff and flexing his muscles, we get the debacle in Egypt. We get the debacle in Libya. We get the Iranians marching without any roadblocks toward a nuclear weapon program.

Now Al-Qaeda is growing left and right, we’re shutting down 21 embassies, and now Syria may have used chemical weapons and whatever comes next. My friend says here, “The best thing that Obama could do to fix this mess would be to invite Bush and Cheney to the White House for consultations,” if he really wants to get out of this. So the point here for my friend is: This guy doesn’t know what he’s doing. He hasn’t the slightest clue.

He doesn’t realize how bad Al-Qaeda is. He doesn’t realize what a threat and what a danger militant Islam is, and so when he was criticizing Bush in 2002, he didn’t know what he was talking about. (This is the point.) He didn’t know what he was doing. He wasn’t just being political, and so the point is that now Obama has learned the way of the world. He’s sitting in the Oval Office, and he’s a little bit of shock, because all of this is new to him.

I just find that really hard to believe. I think the Democrats know exactly how the world works. They just think America’s the problem in it, and Obama was clearly taught that. I mean, all these liberal Democrats think that America is the problem. “If it weren’t for us and previous Republican presidents, then there wouldn’t be an Al-Qaeda.” They think this way. “There wouldn’t be a bunch of communists that want to take us down. There wouldn’t be any enemies, wouldn’t be people who don’t like us.

“But these Republican warmongers who like sending the military every which way…” Look at what Obama’s done. I mean, they really do look at America as the problem in the world; we look at America as the solution. I just have a tough time buying into this notion that Obama was a neophyte back in 2002 as a state senator in Illinois, and I can’t intellectually understand how you don’t know and have a true grasp on who America’s enemies are. Now, I can totally understand somebody not thinking our enemies are our enemies. But I can’t understand somebody not knowing that they’re bad guys.

You’ve got the Martin Luther King thing tomorrow, the 50th anniversary. That’s gonna be all about Obama. I mean, everything. (interruption) Well, we’re dealing with a deceitful, arrogant whatever — or a incompetent boob. Whichever is the case, it is clear that the forces of the ruling class (for lack of a better term) whatever they’re doing, it’s protecting Obama, at all costs.

This thing tomorrow is all about what Obama is gonna make of it and what it’s gonna say about Obama and what is Obama gonna do at the 50th anniversary, and he’s gonna focus on the budget battle. He’s gonna take the occasion to attack the wealthy in the context of race and the economy, because at that event tomorrow it will be permissible to do so. So that’s a mess. We’ve got the red line in Syria. We’ve got the debacle in Egypt and Libya and so on. Now the Iranians are once again — and they telegraphed their intentions.