RUSH: Bashar Assad denied the gas attacks. He was interviewed by Charlie Rose. They aired it on CBS This Morning. We’ve got some sound bites. Charlie Rose said, “To this date, you’re not sure chemical weapons have been used, even though you’ve seen the videotape and you’ve seen the bodies, and your own officials have been there.”

RUSH: Oh! Oh! I know the guy is a brute, folks. There’s nothing to recommend Bashar Assad. But to say that? “How can you talk about what happened if you don’t have evidence? We’re not like the [Obama] administration. We’re not social media administration,” meaning we can’t just put it on Facebook and Twitter and have everybody believe it. “We are the government that deals with reality.” We don’t have anybody there; none of our people are where that nerve gas was used.

This is what he’s asserting. Charlie Rose then said, “Well, Secretary Kerry has said that there is evidence that rockets were fired from a region controlled by your forces into a region controlled by the rebels. They have evidence from satellite photographs of that, and they have evidence of a message that was intercepted about chemical weapons and that soon thereafter there were other intercepted messages. So Secretary Kerry has presented what he concludes is conclusive evidence.”

ASSAD: He presented his confidence and he presented his convictions. It’s not about confidence; it’s about evidence. The United… Sorry, the Russians have completely opposite evidence that the missiles were thrown from [an] area where the rebels controlled. That reminds me about what Kerry said about the big lie that Colin Powell said in front of the world on satellites about the WMD in Iraq before going to war when he said, “This is our evidence.” Actually he gave false evidence. In this case, Kerry didn’t even present any evidence. He talk, “We have evidence,” and he didn’t present anything. Not yet. Nothing so far. Not single shred of evidence.

RUSH: Gosh, folks, this is hard. (laughing) I’ve gotta tell you: This is hard. Nobody wants to believe this guy! But look what we’re presented with. Look what our alternative is. John Kerry? I take you back to the way Conrad Black characterized him: A guy who attended North Vietnamese “catechism classes” to memorize their complaints about the US so he could come back home to congressional testimony and repeat it, which he did.

John Kerry, who accused Bush in intel of lying about weapons of mass destruction. John Kerry, who accused American troops in Iraq of committing atrocities like terrorism and rape, beating down the doors of homes, terrorizing women and children. John Kerry said it happened. He believed it. And then to bring Colin Powell into this? If there were ever a man who was governed by his desire for an impeccable reputation, it’s General Colin Powell. 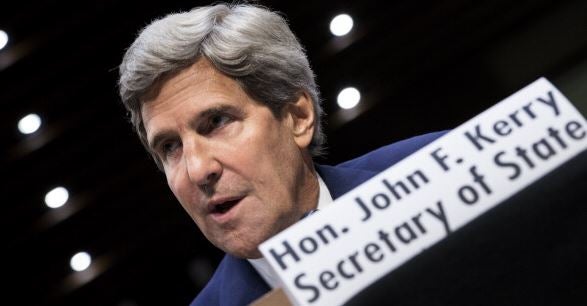 And here you have Bashar Assad citing on CBS the most embarrassing moment of Colin Powell’s career, when he was trotted out to present all that satellite evidence of weapons of mass destruction, and it turned out not to be there when we got to Iraq. General Powell has been… He’s not alone, but it’s a great explanation for why General Powell and his aide Lawrence something or other have totally turned against Bush, turned on Bush after the second term and beyond.

So there’s Kerry doing the same thing, except in this case, Kerry didn’t even present any evidence. “He talk, ‘We have evidence,’ and he didn’t present anything. Not yet. Nothing so far. Not single shred of evidence.” Do you think that you’ve seen evidence? I’m just asking. I don’t know. If you’ve paid attention to this, you’ve heard Kerry. You’ve seen Obama and the regime, if you’ve watched any of this on television. Do you think you’ve seen evidence?

How many of you are convinced? Are you dead certain that Bashar Assad used chemical weapons on his own people? I don’t know. (interruption) Well, yeah, people are waiting for the UN report. Yeah, that’ll really bring confidence. You’ve got Putin with his hundred-page report saying it wasn’t Bashar, that it was the rebels. Really, what are we supposed to believe? Well, this is where once again I’m gonna run right in and say we believe what we know, and what we know is not speculation any longer.

This never has been speculation for me. What we know is what Obama’s intentions for this country have been since his campaign in 2007. We know that Barack Obama and John Kerry and Samantha Power and Susan Rice and everybody in this administration believes that the United States is the problem in the world. We know that they believe that the number one superpower ranking or status hasn’t been deserved, it’s not been just, and they are presiding over an America in decline, while saying just the opposite.

I mean, if we’re searching for things, evidence — things that we know — we know that. We know those things, and from there we can make informed assumptions about what’s happening policy-wise, if people have the guts and the courage to do that. And that’s what is not happening inside the Beltway. The formulaic analysis is absent any guts or courage. They continue to analyze this as though it’s just your average Democrat president and your average Middle East problem and your average conflict and standard American role in something like this.

They’re not looking at any of the known specifics.

That’s why it’s so empty. That’s why when you watch it you don’t feel like you’re learning anything. In fact, you feel like you’re watching a mirage or, well, you’re being lied to. You’re being stoked by people seeking to be the smartest people in the room with their conventional analysis, absent any specifics that are really known. So, after Assad compared Kerry to Colin Powell and said (summarized), “You guys can talk all you want about what you think, but you haven’t presented any evidence,” they then had this exchange, Charlie Rose and Bashar Assad.

ROSE: They have shown the Congress what they have, and the evidence they have from satellites, intercepted messages, and the like.

ASSAD: Nothing presented. Nothing has been presented so far.

ROSE: They have presented it to Congress, sir.

ASSAD: But you’re a reporter. Get this evidence and show it to the public in you’re country.

RUSH: (laughing) Again, what are we supposed to do here? On whose side are we? This is uncomfortable and troubling. I am intrigued here that somebody under attack is telling an American journalist, “Hey, you’re a reporter. Go get the evidence! Show it to the public in your country.” See, this gets to something fundamental. Charlie doesn’t have any. He’s just doing what every journalist is doing: Just relying on Obama, and rely on the Democrat administration.

He’d be accused of having an objective he wanted to achieve. “He’s gonna send American troops in to die for his own personal wacky beliefs,” or whatever. This is the kind of thing that would be said and these reporters would be trying to uncover every bit of evidence they could that the Republican president was lying. In this case, whatever Obama says and shows (ditto Kerry), they just accept without question. So Charlie says, “I’ve seen it, evidence, transcripts, cables, encrypted messages that the administration says prove it.”

Bashar says, “You’re reporter. Why don’t you go find it yourself?

That is a part of that that tickles me, I must admit. So finally Charlie Rose says, “Will there be attacks against American bases in the Middle East if there’s an air strike on you?”

RUSH: Now, folks, you may be shouting at your radio. I haven’t brought it up yet, but it’s time now to introduce the latest player in this whole scenario, and that is this. All of a sudden, Obama is saying this is about Iran. Starting last summer, Iran was not part of this. Now, we know that Iran’s the state sponsor of Assad and Syria. We know this. But Obama has not said that Iran’s involved here. This isn’t about sending a message to Iran.

All of a sudden it is.

All of a sudden now. Since the previous efforts to sell this don’t seem to be working, now all of a sudden let’s bring Iran into it.