Food Marketing and Advertising is None of Michelle Obama’s Business

RUSH: Michelle Obama, first lady of the United States — not content with botching the school lunch menu, not content with urging everybody to drink water so that they increase their exercise and energy level (which is a bogus thing) — Michelle Obama “now wants food makers and entertainment companies to spend less time advertising sweet and salty foods to kids and more time promoting healthier options.”

Now, let me just say something. This is something that may not seem like a big deal to a lot of people. “Oh, the first lady just wants to help.” Let me tell you the truth of the matter. This is none of her business. The free market takes care of this stuff. On what basis is the unelected Michelle Obama empowered to control American manufacturing and advertising? This is how, by the way, we eventually get advertising bans on products that were seen as dangerous.

If they have to, they will deny you what you want, and they will make it unavailable, and they will make it against the law to manufacture it or advertise it. The first lady of the United States has called a “summit on food marketing.” That is none of her business. But the way this works is, the food companies are quaking in their boots because this is Mrs. Barack, and she’s on the warpath.

And her husband has demonstrated that he will use the power of his office outside the law and outside the Constitution to punish people that he doesn’t think are doing what he wants done. So she calls a food summit, and they’ll show up, and they’ll be appropriately scared. It’s their business, and they are very much aware that if they want to, Michelle and Barack Obama can cause great harm to their businesses. All it takes is one of the two going on TV and ripping Twinkies or whatever it would be, Coca-Cola.

That’s all it would take, and the companies are then faced with massive PR and advertising budgets to overcome what the government is saying — and then if you do that, you might even make ’em madder. So then they target you in other ways to make it impossible to stay in business. So what may seem like a really good thing based in total compassion is nothing more than brazen use of government power to intimidate food makers and entertainment companies to spend less time advertising “sweet and salty foods” to kids, and more time promoting what Michelle thinks they should do.

RUSH: Here are the details on Michelle Obama’s food-marketing summit — and, again, it’s none of her business. This is not something you would ever see a Republican president do. It’s none of her business the way food’s marketed and sold. I mean, she could go out and make speeches. She can do what she can if she wants to educate people. But to bring these companies in? I don’t care what they call it.

When you have the first lady calling you in, complaining about what you’re doing, there’s an implied threat, and these people are totally comfortable using this kind of statist power on people. This is where, folks, you and I, we conservatives, this does not interest us at all. We believe in the free market. We believe in life. We believe in people having choice, to live their life as they choose. Coca-Cola, Twinkies, don’t kill anybody. It’s none of our business.

People want to drink this stuff. If all this stuff is rotten, what needs to happen is Michelle Obama needs to propose that it be banned. But if they won’t ban tobacco because of the tax revenue they get from it, then what kind of phony baloney, plastic banana, good-time rock ‘n’ rollers are we dealing with anyway? So it says here, this is from the AP, “Concerned about the nation’s childhood obesity issues…”

This, of course, is under the guise of the feel-good issue of preventing fat children, because after all, who wants fat children? You don’t want your kids to be fat! If you’re not a parent yet, you don’t want your kid to be fat. If you are a parent and you got a fat kid, you’re not crazy about it. Michelle Obama knows it so she’s gonna come along and help you by attacking what she thinks is making your kid fat, which she can’t prove and she doesn’t really know.

“[T]he first lady on Wednesday is convening the first White House summit on food marketing to children to get involved parties talking about how to help consumers make healthier food choices.” There’s no “helping” about it. This is gonna end up being demanded. “That includes enlisting the persuasive power of the multimillion-dollar food marketing industry. As she helped kick off a nationwide campaign last week to encourage people to drink more plain water,” and be careful. You can kill yourself doing that.

You remember there’s a radio station in Sacramento that had a contest that involved who could drink the most water, and the woman drank herself to death. You can do it. Mrs. Obama, after “encouraging people to drink more plain water…” What do you mean, plain water? You mean no Fruit2O? Oh, no! “Mrs. Obama said she would keep reaching out to new people and organizations and keep making the case for healthier choices like water and fruits and vegetables.

“The White House says it has invited representatives from the food and media industries, advocates, parents, representatives of government agencies and researchers, though it did not release a list of names and organizations. Mrs. Obama will open the meeting with public remarks. The rest of the meeting will be closed to the media.” Oh, really? Public remarks to open, and then the meeting is closed? Why? It’s for the kids! What the hell could go on in there that we can’t hear?

Where does this stop?

It doesn’t stop because these people don’t have any limits on their own power. They don’t have any self-imposed or other limits. It’s all based on a vanity and an arrogance and a conceit that you’re stupid or unreliable. Either way, you need to be told what to do, because you won’t do, not what’s best. You won’t do what they want you to do on your own. Ms. Obama, if you really want to help the children, you know what you’d be advocating? You’d be advocating the banning of violent, graphic sexual video games, for one.

You could be promoting two-parent households, if you really wanted to help. But no, nothing like that. We’re gonna have all of the perversion we want — we’ll call it “enlightenment” — and we are going to have all the filth that we want — that’s called “creativity” and “art” — and we are going to have all of the devastating cultural rot we want because they all contribute and donate to Democrats. But when it comes to our food, we’re gonna control all aspects of that, because this is not about helping anybody.

This is about controlling them — and, in some cases, it’s about getting even. Some of these people, I’m sure, the Obamas don’t like. Maybe they make too much money and they donate to Republicans. Maybe they have a really deep animosity for Coca-Cola. I’m just mentioning names. I don’t mean to focus on the brand. Soda pop, soft drinks, maybe they’ve got a real animus. Maybe they run around and they actively hate this stuff. Consumer advocates? Can I give you an example of one of those?

“Consumer advocate” would be “Center for Science in the Public Interest.” You know, these two people that are anorexic sticks and they run around, they’ve got a fax machine, and they send out notices saying, “Using coconut oil to pop popcorn in theaters should be banned because… Well, because it’s just bad.” And then they say, “Get MSG out of Chinese food. It’s just bad!” That’s consumer advocates. They’re no more consumer advocates than Colonel Sanders was an advocate for chickens’ longevity.

RUSH: This is Janice in Baltimore. Janice, I am glad you waited. Thanks very much. Hello.

CALLER: Hi, Rush. I think you’re great. I’m very nervous, but I want to talk to you about Michelle Obama wanting to cut back on advertisements for sweet and salty products. 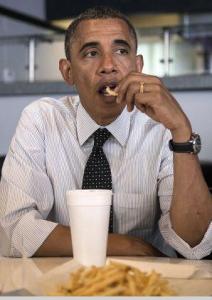 CALLER: I think she should start with the food stamp program. Think about it. With the government allowing you to buy sweet and salty products with food stamps, they’re making poor people fat. Do you agree?

CALLER: So I think we should all call Michelle Obama and suggest starting there. I want to just tell you a little story. I went into a corner store, and a lady was in front of me. She bought a two-liter soda with a food stamp card —

CALLER: — and then bought $5 in lottery tickets, and I’m thinking, “Here I’m paying for her two-liter soda and she’s spending her money on the lottery.” I mean, it just makes me mad, very angry.

RUSH: Well, there’s one thing you’re misunderstanding in all this, and that is that these people with food stamps live in neighborhoods where they don’t have any choice but than to buy this junk, because the healthy food makers hate minorities and don’t put decent food stores and grocery stores and restaurants in the neighborhoods where they live. So they’ve got no choice but than to buy junk with their food stamps. It’s part of the unfairness, the natural discrimination of capitalism in America.

CALLER: But isn’t it also funny how they can get to a casino and to a bingo hall but they can’t get to a grocery store?

RUSH: What would you do if you were poor as a skunk and had nothing else to do to have fun? You’re looking at this all wrong. People on food stamps are virtuous. We’re gonna extend them all kinds of latitude ’cause their lives suck to begin with, because they’re born in America and they’re poor! So if they want to have a Coke, so be it! But you shouldn’t because you don’t have to and you’re smarter.

CALLER: I wouldn’t pay $2.50 for a two-liter soda at the corner store, and I make pretty decent money.

RUSH: Neither are they. You are!

RUSH: You’re paying for them and your own.

RUSH: They’ll just go buy the Budweiser or whatever.

CALLER: That’ll take care of all the poor fat people.

RUSH: Well, somebody has to or the kids aren’t gonna have any health care programs.

RUSH: I know what you’re saying. You’re trying to highlight Michelle’s hypocrisy. And it’s everywhere. No question about it. But I ain’t lying. I ain’t lying. I’m telling you, the food stamp people have wide latitude. They’re not gonna be condemned. They’re the poor. They have no choice but than to eat and drink that junk. They have no other options, ’cause America’s so unfair to people like them.

These big box and other grocery stores are a bunch of racist pigs! They don’t want to have their stores in those neighborhoods. All of this is a lie, by the way. This “food desert” stuff, it’s all a lie. It’s all made up. It isn’t true. But Michelle asserts it, and the media reports it, and so everybody ends up thinking it’s true. It’s just so much pap. Anyway, Janice, I appreciate the call. Thanks much.