Obama: “Raising Debt Ceiling Does Not Increase Our Debt”

RUSH: Sharon in Sun City West, Arizona. Great to have you. Hi.

CALLER: Thank you very, very much, Rush. It’s a pleasure talk to you.

CALLER: It’s a pleasure to talk to Bo. We love your tea. We voted online, as you requested, against Obamacare. The reason I’m calling, we moved 11 years ago from the state of Washington here to Arizona. At that time, we had Napolitano in office. When she went out, we were $3 billion in debt. Jan Brewer took over. Within two years, she brought us into the black. She fought the Democrats all the way. I think this is probably gonna be answering my own question, but I cannot figure out why the people in office in our capital can’t get our budget in place by just looking at some of the things that governors, et cetera, in our state and others have done.

RUSH: Well, let me ask you a question. 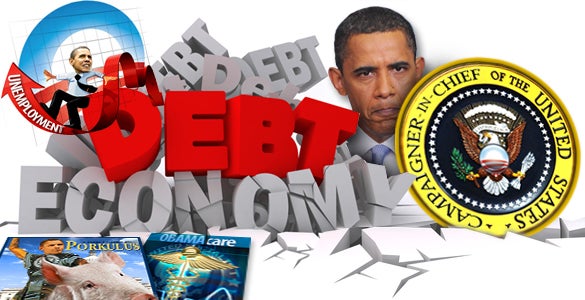 CALLER: No, because, you know what? They wouldn’t be able to balance it and still keep paying all those entitlements, and I want to tell you how hard it is in this retirement community to go up to a grocery store line and the people in front of us that are young and using those entitlement cards for the things they’re buying. My husband and I have been married 54 years. We’ve always stuck to a budget. We both always worked. We were hard workers, dedicated, loyal, good workers.

Well, the California governor doesn’t for some reason and the Illinois governor doesn’t, but every other governor seems to have to. But the Democrats in Washington, the last thing they want to do is balance the budget. Obama doesn’t think we’ve got a debt problem now. Balance the budget? We’re printing $1 trillion a year, the Federal Reserve is, that we don’t have, and it’s backed up by nothing. Sharon, I appreciate the call. Thank you.

RUSH: Obama said that the debt ceiling doesn’t raise our debt. I want to you hear him say it.

OBAMA: I just want to remind people in, uh — in — in case you haven’t been keeping up, raising the debt ceiling, which is done — been done over a hundred times, does not increase our debt. It does not, uh, somehow promote profligacy. All it does is it says, “You gotta pay the bills that you’ve already racked up, Congress.”

RUSH: This is just incredible. The national debt’s up $6 trillion since this guy took office. It was $10 trillion. Actually it’s up maybe $7 trillion. It’s close to $17 trillion now, since he took office. We’ve raised the debt ceiling a hundred time? We couldn’t be in $17 trillion of debt if the debt limit hadn’t permitted it, but see, it’s all about Congress has to pay the bills. It’s the same pap that comes along every continuing resolution.