RUSH: Christopher, Bonne Terre, Missouri, great to have you on the EIB Network. Hi.

CALLER: Mega dittos, Rush. I’m one of the young people that you’ve reached and I’ve kept coming back for more. My comment today, sir, is about the Obamacare law. I’m a nursing student, and we were supposed to do an ethics paper and discussion on the Obamacare law. All the resources we had were from like the Kaiser Institute and everything. And I kept looking and scouring for websites that actually referenced the law, you know, by actual passage, and your website was one of the few ones. You had an article about a Duke professor, and that’s what I used in my paper. And I really want to commend you for doing that and would encourage you to put more things up there for people like us in college that are conservative. I just wanted to thank you for that, Rush. 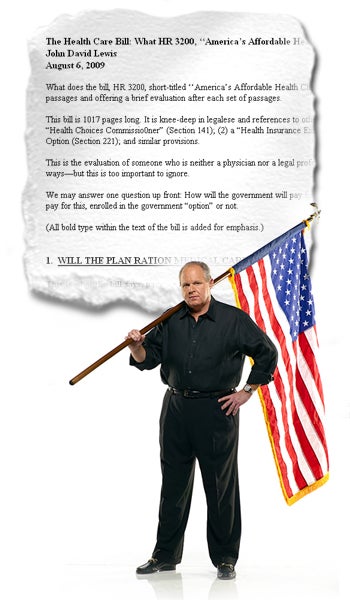 RUSH: That’s great. I appreciate that. We work really hard at this website in documenting everything I say. It’s not easy. I speak about, you know, 50,000, hundred thousand words a day. To get that transcribed, organized, and posted on the website takes a lot of time and attention, and the stuff I cite is a whole ‘nother library, and you noticing that is really great. ‘Cause the people who put the website together are gonna really appreciate that you note the work that goes into it, and I want to thank you because we do. That’s exactly what we have on the Rush 24/7 website about Obamacare, is indeed my opinion on it, but we’ve got the facts right from the law itself. So how did you find it? You’re looking at all of these things, all these different Internet sources for historical truth or factual truth about Obamacare. What led you to my website? Were you already a subscriber and knew that it was there?

CALLER: No, sir. I looked all over the Internet, and most of what I saw, even at some conservative sites, just talked about what the opinion was of it. I finally searched “Rush Limbaugh” and “health care law,” and that came up, and I delved into your website and found that because I figured, knowing you and the guy you are, there would be something to back what you said.

RUSH: So you Googled it, “Rush Limbaugh” and “health care”?

CALLER: And it came up with the interpretations. I can’t remember the professor’s name, but he’s from Duke University.

RUSH: Well, when the Google guys hear about this they’re gonna change the search results, I’ll guarantee you that.

CALLER: Probably. But I want to say thanks. I’ve been a lifelong listener. My grandpa introduced me to you, and I never turned back. I was drawing political cartoons in 1992 listening to you as a second grader, so I just wanted to thank you. It’s such a thrill to talk to you, Rush, so thanks.

RUSH: Did you say second or seventh grader?

RUSH: Second grader. Wow. Wow, wow, wow. Okay. Well, I appreciate that. And everybody involved really thanks you for your nice words about RushLimbaugh.com, because, you know, they’re part of the overrated staff, too. And it is hard work. Do you realize just the amount of data that is put forth on this program each day that has to be documented and put in order, has to make sense the way it’s transcribed and edited and then the graphics that attach to it that we create or find. It is a Herculean task every day, and it has to be done instantaneously.

In the old days it took them three hours to be able to update the site to reflect the contents of each day’s show, and, as technological advances have taken place in the way websites are built and modified, we can now do it during the program. So things that were discussed in the first hour are up, in many cases, by now, and even sooner. But then citing the source for all the stuff that is said here is another task, and, Christopher, I appreciate your call, that you noticed that. We’ve always felt good about this website. It’s encyclopedic. In addition to being a website that reflects the sterling personality of the host, it is indeed its own encyclopedia and library, and I’m grateful that you saw that.

RUSH: Let me detail for you one of the pieces that our last caller was talking about that he found on RushLimbaugh.com. We talked about an article by a Duke professor who explained what he Obamacare law actually says. John David Lewis is the professor’s name. He was at Duke, and he did a great piece in explaining what the law itself actually says, in layman’s terms. That was the title of his piece, ” A Duke Professor Explains What the Health Care Bill Actually Says.”

It was excellent at breaking it down into layman’s language. It got rid of all the legalese and the whereases and heretofores and why-the-hells and whatever you find in legislation. It was just great. He was a professor of classics at Duke, and that’s what our caller was referring to. That’s who we cited about Obamacare, and we talked about that article back on August 12th of 2009, and Christopher, the caller, was able to find it. He’s a nurse student and he was assigned research project.

He found it and was able to use it in his research. If you go back now, if you go to RushLimbaugh.com, you’ll find it. “A Duke Professor Explains What the Health Care Bill Actually Says.” Use that as a search term or anything like it from it, and you’ll get it. If you go back and read that piece, it is even more clearly prescient than we thought at the time because now a year has unfolded since… and he explained what Obamacare’s really like and what it really says, and there have been things happen since he wrote the piece that bear out what he says.

So it would be well worth your time to go back and get it.