RUSH: Tom DeLay. Tom DeLay’s nickname was “The Hammer.” The Democrats thought that was very bad. He was nicknamed “The Hammer” because DeLay had magic when it came time to corral votes on the Republican side in the House of Representatives, starting back in 1995 when the Republican freshman class was sworn in and they assumed control of the House for the first time in 40 years, Tom DeLay was the whip. Tom DeLay got the votes. He was nicknamed “The Hammer,” and because he was so good, he was unapologetically good, Tom DeLay did not worry about compromise or making the Democrats feel good or not hurting their feelings or working with them or any of that. He was hated.

Tom DeLay was despised because he was good. He had his enemies on the Republican side as well, later on. Tom DeLay came to Congress from a job as an exterminator. He ran a bug control company in Houston, the Sugar Land section of Texas, of Houston. So he knew well how to get rid of insects and vermin and other things. The perfect thing to do would be to go to Congress. But he was good at it, and the Democrats hated him. And so they attempted to criminalize the kinds of things that DeLay did to help Republicans get elected, to help himself get elected. And so they found a partisan prosecutor in Texas by the name of Ronnie Earle who kept shopping and shopping and shopping for a grand jury that would indict DeLay. He had trouble finding a grand jury from whom he could get a majority vote to indict.

They hated DeLay. I can’t tell you how much they hated DeLay. And DeLay was like most Republicans; he had no response to it. I didn’t have a PR firm. He didn’t have any pop culture media friends to portray him as a likable, fun, cool, guy. Image-wise he was just a mean, no-nonsense, hated Democrats kind of guy, and he was bad for America and all this sort of stuff. So, anyway, the upshot of it is that even without any evidence, they finally got a grand jury to indict, and without any evidence they got convictions, and the Republicans had a rule, this is the key, and this is why the Democrats did it. The Republicans attempting to curry favor with voters and with the media, the Republicans wrote a rule of conduct for themselves that said anybody in their leadership ever accused or indicted would be forced to resign.

The Democrats have no such rule.

The Republicans used to not have a rule like that, but they put the rule in during the controversies of the Gingrich-led House, the budget fight of 1995. If you weren’t alive then or paying attention to it, it was vicious. And just as now, Republicans then were hell-bent on showing people that they were likable. They were hell-bent on showing people that they weren’t the kind of reprobates the Democrat and the media describe them as being. And they were always held to a different standard. A Republican who fooled around had to go.

A Democrat who fools around, gold star, resume enhancement, gets a promotion.

But the Republicans, the family values Republicans believed that they had to have the superior morality, to show the American people that they weren’t what the Democrats accused them of being. It was totally defensive, this business, so they write this rule: Anybody in their leadership that’s accused or under indictment must resign. So the Democrats said, “Fine! If that’s what we have to do to get rid of DeLay, we’ll do it.”

DeLay had to resign. Democrats don’t resign. Democrats don’t resign for any reason, other than death, illness, defeat, whatever. They don’t quit over things like this, ’cause they don’t care, and they’ve never made the claim that they’re the family values party, so they’re never held to such standards. But the Republicans did portray themselves that way. So DeLay had to go — and then when they got DeLay out, it was time to hammer DeLay and make him pay the price for beating them all those years.

So here came all these political attempts to indict him, and they finally got a grand jury to indict. They finally got a conviction, and the upshot of it is today. It was all thrown out. It was never anything. The appeals court today said the evidence never, ever amounted to anything near worthy of conviction. That’s the American judicial system. The Democrat Party for the longest time has been attempting to politicize — sorry, criminalize — policy differences.

Tom DeLay ended up being a criminal because he was able to beat the Democrats in the House on vote after vote after vote. If you’re saying, “Well, it doesn’t sound like it’s changed much,” it hadn’t, really, in the sense that Republicans still feel the need to prove they’re nice guys, still need to prove that they are morally superior to the Democrats, that they’re not what the media says about ’em and they’re not what the Democrats say about ’em.

But anyway, good for DeLay. They ended up destroying him. They had him running around with Jack Abramoff and such people. Image-wise, DeLay is a thug. Image-wise, he is a criminal. Image-wise, you know, he was off playing golf at the Old Course at St. Andrews with your money, all this kind of stuff. It was never ending. If you weren’t around, it was never ending, these allegations about DeLay — and they worked in fabricating an image ’cause DeLay did not have a way to fight back or refute any of this stuff. 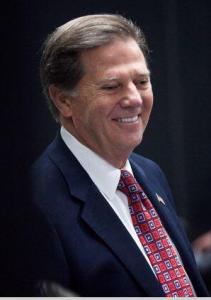 RUSH: Just a little bit more history in Tom DeLay. Tom DeLay stepped down, resigned Congress in January 2006, and that whole year the Democrat Party ran against the Republicans as the party of corruption. I’m sure many of you remember that. The Democrats, Pelosi and all of them were calling the Republicans the most corrupt party in history. Now, the Republicans helped. The Republicans wanted to give DeLay up.

Do you remember why? It’s not a specific reason. It wasn’t anything to do with DeLay. They just didn’t like all the talk about Republicans being corrupt. They found it easier to throw DeLay overboard than to defend him. If you look back at press accounts at the time DeLay stepped down, a lot of Republicans are quoted as being glad.

So then at the end of that year, the Mark Foley controversy over e-mails to the pages fit right in with the party of corruption — and in 2007, the Democrats are running the House of Representatives. From that point out, the Iraq war was in peril and the Bush administration effectively over. The public was convinced we were in a recession, and, “Hello, Barack Obama.” That’s pretty much it, folks.