Was It Worth It, Ladies?

RUSH: Meanwhile, now that the 2012 elections are safely past and the midterms of 2014 are still relatively far away, we have a random act of journalism here from Bloomberg. They have an article here. Headline of the article: “Women Waiting Tables Provide Most of Female Gains in US.” Women waiting tables. The money that women waiting tables earn makes up most of the income gain women in America are experiencing. However you want to call these jobs. Waitresses.

Women waitresses are earning more, a larger share of all income earned by women. What Bloomberg has done here, is they’ve committed a random act of journalism by going behind the misleading jobs numbers to point this out. Even though the jobless rate for women seems to be improving — seems to be — most of the new jobs that women are getting are “lower-paying industries such as waitresses, in-home health care, food preparation and housekeeping. 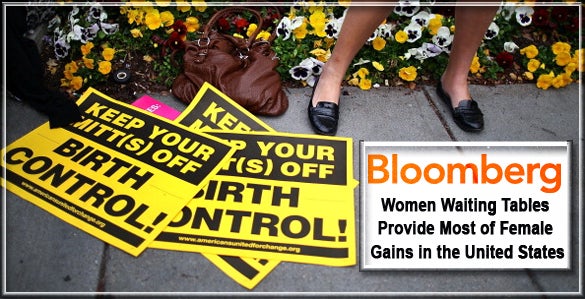 This is the Democrat Party that’s going out of its way to make women believe that it is their greatest champion — and, yet, two blocks from the White House, Honard (one of the waitresses featured) often waits on lawmakers and government officials, giving her a glimpse of people she would like to work with someday. This summer she served a member of President Barack ObamaÂ’s Cabinet, to whom she recommended a glass of New Zealand sauvignon blanc.”

This is from the story! A George Washington U grad, big deal to have waited on a member of Obama’s cabinet. But she’s got every reproductive device and whatever she needs.