The “Let It Collapse” Chorus

RUSH: They’re not gonna like me for this. I’m gonna call it the Let It Collapse Chorus. You know, Cruz called them the Surrender Caucus and they didn’t like that, and so I’ll call Let It Collapse Chorus here, because this is not just the caucus. This is media people and any number of people. So this is a montage of Wednesday, yesterday, last night, and this morning. This is mostly people from Fox News — and look, they’re not alone.

I guess the prevailing wind in Washington on our side is that there is no way this bill can ever work. It’s going to collapse; it’s going to be a disaster. Well, so is Social Security. So is Medicare. So is food stamps. So was the War on Poverty. So’s the Great Society. All of those don’t work. The black family has been ripped apart by LBJ’s War on Poverty and the Great Society! I mean, literally it has — and it’s not me saying that.

It is African-Americans for 25 years who’ve called here and made that point. There isn’t a one of these programs that works. The stimulus didn’t work, but what happens is there is this blind faith in government, particularly low-information people. They believe that everybody’s intentions are good, even if it doesn’t work. “Well, they’re trying! At least they care!” You’ve heard that. “At least they’re trying!

“At least they care about people. You don’t. At least they trying to help,” and then when it doesn’t work, what’s the solution? Another government program to fix what’s wrong with the first one, and they build on themselves and they get redundant and that’s how you end up with 16 different food stamp programs, or school lunch programs or what have you, whatever they are, ’cause they keep failing and they keep adding on repairs.

The architects of failure are the ones that continue to build on failure after failure after failure. I have yet to see the people of this country arise, other than at elections. Now, during Hillarycare, the people did rise up. They didn’t want any part of it back then. They wanted no part of Hillary Clinton running the health care system. But they don’t mind Obama running it, apparently. So the Let It Collapse Chorus is in full sing.

BILL HEMMER: Will Obamacare collapse under the weight of a bad law?

JOE KERNEN: If you put it in and it really does collapse under its own weight, it would make it hard to do any more expansion of the entitlement state.

ANDREA TANTAROS: And why do we keep saving him? From the spending from Obamacare, let them own this — and they will, especially Obamacare. Let them own it. Let Obamacare go into effect.

CHARLES KRAUTHAMMER: Even the labor unions are up in arms against Obamacare. Why would you want to step in the way? It’s the oldest adage in politics, “When the other guy is committing suicide, get out of the room.” That they ought to let this sail through.

MITCH MCCONNELL: I don’t think this law can possibly stand. ItÂ’s pretty hard to predict exactly the day upon which it ends. But itÂ’s cracking.

RUSH: Okay. I understand the theory. It just hasn’t proved out. I understand the desire. I certainly understand when your opponent’s committing suicide, get out of the way. In talk radio the adage is, “When you have a caller making a fool of themselves, shut up and let it happen, ’cause it’s entertaining.” The adage is, “Don’t get in an argument with a fool. The audience won’t be able to tell the difference.” There’s all kinds of these things. The adage, “Let them own it” has a number of different outgrowth theories.

“Go ahead, let’s let the Democrats win the election in ’92! Let ’em win. Let people find out just how about Democrats are for this country.” Right. You can take any number of entitlement programs, and what do we hear? The entire Washington establishment runs around complaining about how they’re not working and they’re all in debt and, “Man, we gotta do something fast or they’re all gonna go bankrupt,” right? Does that sound like they’re working?

Does anybody get blamed for it?

If the blame game worked, FDR would not be a hero, he’d be a goat. He gave us all this. LBJ would not be lionized. LBJ would be an absolute failure if the entitlement state not working and imploding and collapsing caused harm to its architects. I wish it did, don’t misunderstand. It would be great if the American people could see it that way, but before they’re gonna see it that way, they’re gonna have to understand the ideological differences in the two parties.

They’re going to have to, in a majority sense, understand what liberalism is, and if the Republican Party isn’t gonna teach that, and if it’s being countered every day in classrooms all over the country, it’s something that’s gonna be delayed and delayed. Now, here’s Dan Henninger. Dan Henninger wrote a piece in the Wall Street Journal yesterday making this very point. He was on the Willis Report, the Fox Business Network last night. Gerri Willis is the host.

She said, “When we read your op-ed piece today, you say we should let Obamacare fall of its own weight. But the reality is, it is the law of the land. Tell us what you had to say about how this is gonna be a real test of liberalism’s most precious tenets.” 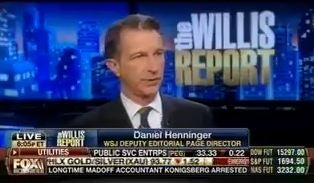 HENNINGER: Well, that being the entitlement state starting in 1936 with FDR creating Social Security. Thirty years later, Lyndon Johnson creates Medicare and Medicaid. We have had endless commissions telling us that the cost of these entitlements is unsupportable, the entitlement bomb. So, what do we do? We create a fourth major entitlement in Obamacare.

RUSH: Right, and who keeps getting elected by saying that the Republicans want to fix these things? It’s the Democrats. Who keeps getting elected by claiming the Republicans want to take these entitlements away? People love these entitlements. They don’t think there’s anything wrong with them, the recipients. We had a call on this program, and I think this is fairly illustrative. It goes back some years ago now. H.R., you’ll remember here. It was Carolyn from Grafton, Massachusetts, just the other side the Mass Turnpike.

She was a grandmother and, of course, a mother, and she wanted her children paying higher taxes. She didn’t care. She wanted her children and grandchildren paying higher taxes is that her Social Security wouldn’t be cut. She wasn’t worried about whether or not it was a failure. She was worried about whether or not somebody was gonna take it away from her. The people don’t run around thinking that this is a problem, particularly the beneficiaries.

You can’t just sit around and wait for people to figure this out. And that’s what I hear the collapse chorus saying, “It’s gonna collapse of its own weight, people are gonna realize.” Not if you don’t tell ’em. Not if you don’t push back and make the case. You know, you Republicans, you’re all worried about what the media says. How do you think people believe that? ‘Cause the Democrats, with the media, for years have been describing you guys the way they describe you. That’s why they believe it. They hear it over and over again.

Anyway, there’s one more bite here from Henninger. I interrupted myself. I think there’s just one more. Yep. Gerri Willis was interviewing, I mean, you heard him say that we’ve had these endless commissions telling us the cost of these entitlements is unsupportable, the entitlement bomb. So what do we do, we create a fourth one. And then he continued.

HENNINGER: And I think this one, because of its complexity and because all we’ve been reading about it notwithstanding the president, has got some big problems. And I’m arguing that the American people, by experiencing Obamacare, are gonna decide once and for all whether to continue with the entitlement state on its current course. And I think if Obamacare gets into as much trouble as I think it’s going to get to then we’re gonna be able to look at alternatives to the sort of system the liberals have been pushing.

RUSH: Ah, that’d be great. Don’t misunderstand me. That would be absolutely great if that happened. But the recipients, the people that get the subsidies, they’re not gonna find anything wrong with it, number one, and that’s gonna be a lot of people, by design. Santa Claus is making sure most patients get their presents here, in the form of cheap insurance, or a cheap fine and medical treatment. But there’s another aspect of this that I would be remiss if I didn’t mention.

While we’re sitting around waiting for this thing to collapse, real lives are being affected. As we sit around and wait for and apparently allow the implementation, this disaster that’s going to happen is going to be a disaster that affects people: doctors, nurses, hospitals, patients. And we’re going to hope that the pain and suffering they incur results in them getting mad at the Democrats. And furthermore, we believe that it’s gonna be so bad, that they’re gonna rise up against Social Security and Medicare and Medicaid and the school lunch program, whatever else comprises the entitlement state, and they’re gonna say, “enough.”

If the Republicans continue to nominate candidates who don’t stand for the opposite of this, and if the Republicans don’t push back and help people understand why their lives are collapsing, then that isn’t going to happen. At some point they’re gonna have to roll up their sleeves and get their hands dirty and get in the mix here. But they’re afraid of me. So it is said by others. I don’t believe that, but that’s what’s popular.

RUSH: If the Republicans, if the “let it collapse” chorus is really counting on Obamacare collapsing, why delay the individual mandate? Why try to do away with the medical device tax? Why try to delay this? There’s so many inconsistencies, if they really think it’s gonna collapse, don’t delay anything, let it implement full boat. Don’t delay the individual mandate. Don’t delay the medical device tax. Leave all this onerous stuff in it, if collapse is the strategery.