Husband of Low-Info Voter Gives Up

RUSH: Costa Mesa, California, as we head next back to the phones. This is John again. Welcome, sir. Great to have you.

CALLER: Okay, so I’m sitting with my wife this weekend, and I was talking about maybe making a job change, and I didn’t know anything about the insurance, and I told her, “You know, I really need to find out about the medical insurance that we have on this new endeavor.” She said, “Well, why, because we can just go to that free one?” Now, my wife’s a low-information voter. 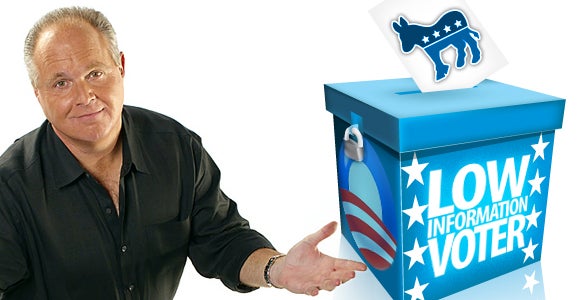 I listen to you religiously, but it gives you an idea of what people that don’t follow anything but Channel 2, 4, and 7, that’s all they know. As far as the Republicans, it’s over, Rush. I listen to you daily, and what I get from you, the vibe I get from you, it’s over. The Republicans don’t have the fight because all they really want, like you said, is the power and the money. Hey, they don’t have it right now; they’re just gonna go with whatever’s gonna happen.

RUSH: You live with an admitted low-information voter. I can understand your attitude. But what are you gonna do?

CALLER: What can you do, Rush? You have to let it play out. I don’t blame the Republicans for not putting up a fight.

RUSH: No, no, no, no. That’s not what you said. You said there’s no point in it playing out because it’s over; it can’t go back to ever the way it was. So what are you…? I mean, personally, what are you gonna do, just stop paying attention to any of this stuff and move on?

CALLER: Basically, Rush, I listen to you every day now just to see if there’s a glimmer of hope.

RUSH: Now, our last caller, his name is John, he calls and says that his wife is a low-information voter. Can you imagine? I didn’t get a chance to talk about that aspect with him, but I can’t imagine the frustration that would be. Well, no, I guess I can. I just didn’t marry them. I dated liberal women now and then, but that was more a professional exercise. That was more on the challenge side of things, and it was education. I was doing it for the career. I dated liberal women for the career. I wasn’t doing it for the romance. It wasn’t possible.

The guy admits his wife thinks that Obamacare is free. He knows it isn’t and he cannot persuade her and yet she is saying, “Don’t worry about any of this, honey, just choose the free route.” And so what he does is call here and vent on how rotten and bad the Republicans are, and how that there’s no way we can ever turn this around.