Cuccinelli Won the Wholesome in Droves

CALLER: Hi, Rush. Before I start with my comment on Rush Revere, I got it last Friday, read it all day Saturday, and enjoyed it immensely. I love American history, and you did an excellent job.

RUSH: Thank you. Thank you very much. I appreciate that more than you know.

CALLER: Well, I’m just really disappointed with the results in Virginia this past week. Seems people decided to vote with their sexual organs instead of their brains. We had one particular candidate who’s a man of integrity and honor and honesty who was promoting getting our coal industry back together because the people in southwest Virginia are starving. We have family schools in Virginia. He was promoting school choice, he didn’t want to see Obamacare expanded, and these people don’t understand what’s gonna happen to this state. We’re gonna turn into a little DC, and it’s just sad. It’s very sad.

RUSH: Well, let me tell you something about this. Because really what you’re saying is, if I understand you… I don’t want to put words in your mouth, so you tell me if I’m understanding you correctly. On the one hand, you had a candidate who you think was a man of honor and character and integrity, and on the other side, you had a low-rent placeholder promising people all the sex without consequences they wanted, and all the goodies and freebies they could get without any consequence, and the guy with honor and integrity and character lost, and you’re beside yourself?

RUSH: Right. So two of them.

CALLER: We don’t know about Mark Obenshain yet because they’re doing a recount, but it just really made me very sad. Here you had people wanting to promote our economy and get people back to work and school choice, and our schools are a mess.

RUSH: Well, I’ll tell you. If you look at the exit polls, there’s something there. I may get a little trouble for this strain of analysis. But you look at Cuccinelli, and Cuccinelli beat McAuliffe in what I call the… This is where I’m gonna get in trouble. I can’t think of another word for it, so I just call it the “wholesome” category: Married people, people that work, people who are self-reliant and all that. He won them in droves.

RUSH: McAuliffe cleaned up in unmarried and single women. I mean, three to one, 67 to 23%. And how did he do it? He’s promising them everything. 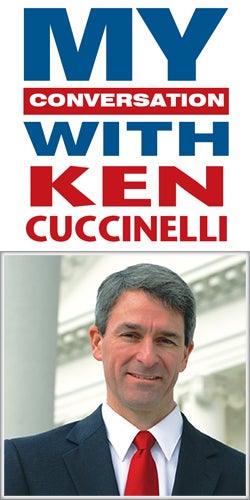 CALLER: Exactly. Exactly. I don’t know how we’re gonna bring the moral standard back to this country, and until we do we’re just gonna have these problems, and we it’s sad. It’s very sad.

RUSH: Let me ask you a question. You’re a resident of Virginia. I’m gonna ask you this and I’m asking you seriously, now. I mean, I probably would have my own answer. But it goes to another theory I’m getting at. You look at Cuccinelli and you look at the McAuliffe, ’cause I had a guy say to me the other, “Rush, what you don’t understand was, Obama could tell every lie in the world he wanted, and Mitt Romney never had a chance because Obama’s likable. He has a charismatic, infectious personality, and Romney looks like a statue. Virtue, character, morality issues don’t matter. The more likable guy, the more charismatic guy — the guy makes you look like you want to go have a beer, chase women with — that’s the guy who’s gonna win.”

Now, does that hold up in Cuccinelli versus McAuliffe?

CALLER: For myself personally, all I can answer for it is no, it doesn’t. I know Ken Cuccinelli personally ’cause I worked very closely with the campaign for E. W. Jackson. So I’ve met the man. I’ve talked with the man. McAuliffe never held any kind of office, and I just look at the him as a snake oil salesman, a shyster. I didn’t find him likable; I found him a liar. I found him preying on people’s fears.

RUSH: All right. He’s a bagman. He’s a Clinton bagman. He’s a placeholder. He’s in there to run that state the way that Clintons or whoever tell him how to run it ’cause he’s not an administrator. You’re right. But to an unmarried single mother, a guy like McAuliffe may be exactly what she’s looking for.

CALLER: It’s quite possible. I was single for 14 years. I never had any children but even in my brokest (sic) times, I never went to the government for my help. I always took care of myself or family and friends helped me. So…

RUSH: The last thing that woman wants to hear is take care of yourself.

RUSH: That’s scary. She’s owed a living because life has dealt her so much unkindness. They saddled her with a kid. She’s single mother. Probably the husband walked out on her or she kicked him out. Something happened. But she’s owed something, in her mind, and here comes McAuliffe identifying with her. McAuliffe said, “Look, if you want to be a receptacle for male semen and not pay a price, I’m your guy.”

CALLER: I guess. I just find it a very sad thing because two years from now, the state of Virginia is gonna be in such bad shape and people gonna be going, “What happened?” and I’m gonna sort of look at ’em and say, “Who did you vote for? You brought this on yourself.”

RUSH: You’re talking about the partisanship. You’ve got northern Virginia, which is DC.

CALLER: Oh, I know. I’m telling you, I think the wholesome part of Virginia would be more than happy to let Washington, DC, annex northern Virginia.

RUSH: Well, the reason I spent some time with you is because it does get down to likability. I mean, this guy was telling me that Romney never had a chance. “Rush, it doesn’t matter. Benghazi, Romney coulda made a big deal about it and scored all the points in the world. He was never gonna beat Obama. Obama had just convinced too many people that he was their answer to whatever the problems in life were and he’s a likable guy — and look what they did to Romney.

But it’s a frustrating thing for people who take citizenship seriously.

I know exactly where you’re coming from.