No Reprieve for the Obamacare Dozen

RUSH: Now, these senators that went up to the White House and asked Obama for a delay in the individual mandate.

Remember the little trick we played on Friday, you know, just to see what would happen with the establishment when I agree — ’cause they (weeks ago, months ago) said, “We don’t need to do anything, Senator Cruz! We don’t need to defund this. We don’t need to delay it. It’s gonna implode on its own. We’ll just sit around hear and watch it.” Okay, it started to implode here, and so I guess the Republicans are just gonna sit by and let it implode.

Then I saw Jonah Goldberg yesterday on TV. “No, no, no, no! The Republicans can’t just sit by and let it implode because it’s gonna hurt people.” Obama hurts people. Everything in this regime hurts people. That is the point. Even the beneficiaries of Obama’s largesse. I mean, even when Obama plays Santa Claus, he’s hurting people. He’s denying them their dignity. He’s denying them their humanity. 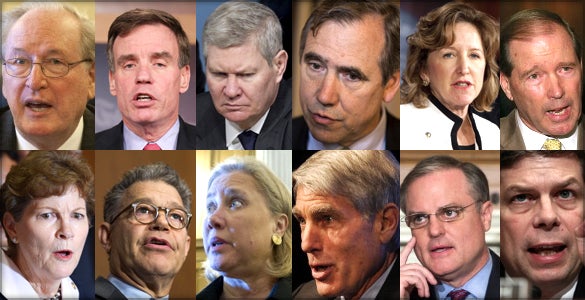 So for the argument, “Well, we’ve gotta do something to help people here. The Republicans can’t be seen as standing idly by while people get hurt,” it’s Obama inflicting the pain, and it’s not just with Obamacare. So the argument sounds good, I’ll admit. “Well, no, Rush. You say that we just ought to sit by here and not let them delay the mandate, let Obama live with the pain that he’s caused.” “But that’s gonna hurt people.”

The whole Obama administration has hurt people! Where’s that argument been for five years? Obama’s economic policies, Obama’s foreign policy, they hurt. That’s the net result of the Obama presidency: People have been hurt. Did you see what the number in the labor force? They’re now 91.5 million people not working. Just six months ago it was 90 million. There are 91.5 Americans are not working! Now, it is my contention that those people are being hurt.

They may have food stamps, they may have their cell phones and their flat screens and they may be driving around in automobiles and so forth, on welfare, but they’re being harmed by this. Families are being torn apart. People’s dignity is being stripped from them even though they may not know it. People are being converted into serfs and wards of the state. The whole point of this administration is that it has hurt people, and it’s hurt the country, and it’s not just Obama’s lie — it’s a big one, of course, is, “You get to keep your plan.

Delaying the individual mandate. These senators, these Democrats, I’ve got no sympathy for ’em, is my point here. So now you’ve got these 12, 13, 14, whatever it is, Democrat senators. They went to the White House, “Please, please delay the individual mandate for our reelection!” You know, any one of these senators could have prevented this mess if they woulda just voted “no” on Obamacare from the get-go.

So they want to have it both ways. These Democrat senators want to be on record as having voted for Obamacare — supporting their president, supporting universal health coverage, insuring the uninsured — and then when the real world hits and we find out that nobody gets to be satisfied (very few get to keep their plans, if any), now these Democrats want a delay in the results, the consequences of their votes.

They could have prevented this, and I think this is an important point as the Republicans seek to regain the Senate, which seems to be the main thing that the GOP donor and consultant class wants to do is to regain the Senate. Okay, well, here’s an argument for you. Now, these Democrats who voted for this mess, votes have consequences. Elections and votes have consequences, and now they want to be protected from their actions.

They want to be granted a reprieve. That needs to be hammered home: All they had to do to prevent this was vote against this. That’s all they had to do. All they had to do was join the Republicans. Maybe don’t even say that, if that’s too incendiary, but it’s true. The story’s from the Wall Street Journal, and here’s a pull quote: “The Obamacare Dozen are receiving an overdue education in the damaging consequences of the bill they supported, all of which were predicted by critics in 2010,” and that’s right.

Every aspect of this has been predicted. There are a lot of us not surprised by any of this. “Any one of these senators,” says the journal, “could have prevented the current madness by voting no. And now the president they empowered to govern from the ideological left has rejected even their … if the problems get worse. These senators deserve to be held accountable at the ballot box,” and what is Obamacare?

As I said, as far as he’s concerned, everything’s right on schedule.

He’s not up for reelection again.

The consequences all this to him are practically nonexistent.