None of This Had to Happen

RUSH: Let me cut to the chase on something here regarding Obama yesterday and reinstating your canceled plan, ’cause I’ll tell you, you can find whatever you want to find. You can find the insurance companies saying they can’t do it. You’ll find media people arguing amongst themselves about whether or not Obama’s got the legal authority to do this, and that’s really what I want to focus on here because people have been confused.

I’ve been getting e-mail all day, “Rush, why would Obama veto the Upton bill if it basically says exactly what he said yesterday?” What did Obama say yesterday? And, by the way, I don’t believe for a moment that the bumbling, incoherent, “Gee, I don’t know what’s going on around here” president we got yesterday was anything but an act. That was a total act yesterday. This guy is not disengaged. (Obama impression) “You know, I didn’t know about the website.” One week into it, he said he still didn’t know how bad it was, that nobody had told him. Yet he’s the smartest guy in the room. And he tried to turn his ignorance into a sign of his brilliance when he said (Obama impression), “I think I’m pretty smart. I’m smart enough to know not to go out there and tell you this thing’s working if it isn’t. I didn’t know.”

So we’re supposed to believe that he didn’t know. This guy knows everything! This is The Messiah, yet he doesn’t know anything. And I think it’s just more Limbaugh Theorem stuff. I think it’s more of his effort to distance himself from the day-to-day. You know what the guy does, make a pronouncement here, make a pronouncement there, and then move on and when he makes a pronouncement he expects things to happen, and he thinks everybody thinks it’s gonna happen when he makes the pronouncement. And then this didn’t work, so he goes out and acts like he didn’t know anything about it, is told about it later on, and now he’s working real hard to get it fixed and he’s sorry it happened to you but he’s not sorry it happened to you. He’s sorry for the way you feel about it but he’s really not sorry it happened and he’s gonna make sure that whatever happens happens next.

I’ve got sound bites here from the Drive-Bys all worried he seemed incoherent and rambling and the Regime is falling apart. Folks, make no mistake. They haven’t changed at the Regime what their objective here is. In fact, I saw a piece, I don’t want to mention the guy’s name because it’s not about that. It really isn’t. But I guess I’ll share a little frustration. For how many years have I been telling you, and you know it because you’ve heard it and you’re smart enough to figure it out yourself. Ever since even before this thing was officially proposed and then passed in Congress, signed into law, one of the fundamental parts of Obamacare, one of the things that had to happen for Obamacare to happen is the private sector insurance market had to be wiped out. 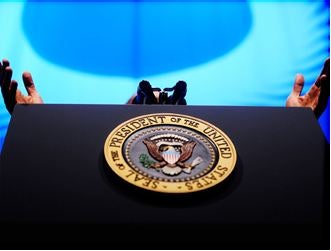 This has been, for me, a fundamental point understood from the get-go, understood by virtue of whose proposing the law: Obama. Liberal, socialist, communist, collectivist, redistributionist, whatever, he wants the government to run health care. That means there can’t be any private sector alternatives, because when it gets down to the end of the day, the government’s gonna have sole control, that’s what he wants. And for that to happen, there can’t be an existing insurance market. So there’s a bunch of places today celebrating renowned think tank scholars for just figuring this out. And I just sit here and marvel at what need not have happened if otherwise smart people would have just spoken up three years ago instead of waiting until now.

You know, all of us that have been trying to warn everybody, I mean, even McCain, even after yesterday coming out and suggesting this thing needs to be repealed, he’s still going after Ted Cruz. And Ted Cruz is the guy that was right on this. Ted Cruz is saying, “You know, you guys, everybody’s missing the point if you still get focused on the insurance company ’cause the next thing you’re gonna lose is your doctor, because, A, your doctor’s gonna quit or, B, your doctor’s gonna be reassigned or, C, there aren’t gonna be very many doctors left.” That’s the next thing to happen here.

But it’s just sad to me that we’re here. None of this need to have happened, and there are smart people on our side of the aisle who have known as early as I did who this guy was and who should have been saying “I hope this guy fails” right along with me. There should have been opposition to this guy all along. I know I’m crying over spilt milk and it doesn’t accomplish anything, but it is frustrating. All of the Johnny-come-latelies here.

Now the argument is raging over whether Obama can legally do what he did. Well, now, they were as smart. They might not have had the compunction or the guts to say it early on ’cause you gotta look like we all want the president to succeed, and particularly the first black president. Black was irrelevant to me. The president of the United States is a pretty important position and it’s the ideas and policies that matter to me, not the color of their skin. Anyway, been there, said that, done that.