RUSH: We mentioned earlier that Obama didn’t know that Obama was living with his uncle, who happened to be an illegal alien at the time. Here’s Jay Carney. This is yesterday afternoon in Washington the White House at the daily briefing. Ed Henry, the Fox News White House correspondent, said, “The White House said that in 2011, that there was no record of Obama and his uncle, Omar Obama, ever meeting. Now the Boston Globe is being told by the White House — and I assume you can elaborate here, Jay — that, in fact, they not only met, but they lived together briefly when the president was in law school. So how could you make that kind of mistake?”

CARNEY: Folks looked at the record including the president’s book and there was no evidence that they had met, and that was what was conveyed. Nobody spoke to the president. When Omar Obama said the other day and there were reports that he had said the other day that President Obama, back when he was a law school student, had stayed with him in Cambridge, I thought it was the right thing to do to go ask him. Nobody had asked him in the past, and the president said that he in fact had met Omar Obama when he moved to Cambridge for law school and that he stayed with him for a brief period of time until his — the president’s — apartment was ready.

RUSH: Nobody asked Obama if he ever lived with his uncle. They just took it upon themselves to lie for him. So Jay Carney says, “Yes, well, folks looked at the record, including the president’s book, and there was no evidence that he’d ever met his uncle.” Oh. So just because Obama didn’t write about it in his book… I’m sorry, just because Bill Ayers didn’t write about it in Obama’s book… By the way, do you really…?

There were no records. If the White House wanted to look at my records, they’d have to ask me. They’d have to ask me. But the White House didn’t ask. They just looked at the records and they didn’t see any evidence that Obama… Well, there aren’t any records. They’re just making that up. They said they looked at Obama’s records, like his college transcripts. They looked at the same thing to see if Obama had ever lived with Uncle Omar, and they couldn’t find any evidence of that.

So they assumed he hadn’t lived with and didn’t even know him. But it’s a good point. If the White House wanted to find out where you were when you were in college would they look at the records that you kept of who you visited? And they did that, and they couldn’t find any evidence in Obama’s records that he even knew Uncle Omar, much less visited Uncle Omar. That would be Omar Obama. (interruption)

What a tangled web. What an intricately woven web of deceit. By the way, Aunt Zeituni has ignored several deportation orders — and by the late 1980s, Uncle Omar was already ignoring a deportation order, which is a felony. Aunt Zeituni did the same thing. I mean, Zeituni and Omar basically said, “Okay, kick us out,” but if you’re Omar, how do you feel? Obama says he doesn’t even know who you are when he knows who Zeituni is?

Look, we’ve all got our family problems.

It’s like Ross Perot said, “Everybody’s got us the crazy uncle in the basement.”

RUSH: Steve in Middleton, Colorado, great to have you, sir. Thank you for waiting, and welcome to EIB Network. Hello.

CALLER: Trying for 25 years to talk to you. Twenty-five long years.

RUSH: And here you are.

CALLER: Here I am.

RUSH: I really appreciate that. That is effort. That’s commitment. 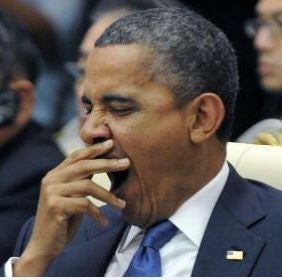 CALLER: I wish the president would just stay off the air and go in his office, talk from his office to us if he has to, but be in his office and do some work and get off the TV.

RUSH: He’s working harder than anybody ever has on this.

CALLER: I don’t think so. He has another distraction now, Mandela. Now he has to go to South Africa probably next week. He won’t work another five or 10 days.

RUSH: The funeral for Mandela’s on the 15th, did I see that right?

CALLER: He’ll be distracted. You brought up something just a little bit ago about Obamacare and his uncle, his illegal uncle, his immigration problem uncle and aunt. How are they gonna get Obamacare?

RUSH: Are you kidding, how are they gonna get Obamacare?

CALLER: Yeah. They can’t. They have no Social Security numbers, if that’s correct.

RUSH: Uh, they’re the aunt and uncle of the president. They’ll be treated if they get sick.

CALLER: They’ll be treated. I understand that. But my friends can’t get even get covered.

RUSH: I know you’re asking facetiously. Now, seriously, you wish Obama would actually work on Obamacare instead of going on TV and talking?

CALLER: He has fixes to get done before the deadline on the 27th.

CALLER: He’s supposed to. He says he cares.

CALLER: He told everybody yesterday he cared, and he wanted them all to sign up, and his liberal friends agreed.

CALLER: That’s what he should be doing, right?

RUSH: Well, but he won’t so that what’s the question? Why? Why won’t he just broom it and get it right?

CALLER: ‘Cause he has a bureaucracy problem.

RUSH: No, it’s because this is what’s right.

CALLER: It is what’s right? I’ve been able to keep my plan for the last three or four years without any changes, just increasing my rates. When I ask why my rates go up, they say, “Your group is there.” (sic) I say, “Wait a second. You don’t deserve a 13 or 14% raise this year,” but my plan hasn’t changed.

RUSH: Give it time.

CALLER: Just the price has changed.

RUSH: Everybody’s plan is gonna change. You don’t need insurance for contraceptives, do you?

RUSH: You’ve been paying for maternity coverage for 30 years?

CALLER: Yes. For as long as I can remember.

RUSH: Well, Obama ought to love you.

RUSH: Well, then you know you’re gonna get cancelled at some point.

CALLER: No, not really ’cause… No, they can’t do that ’cause I still work for the government.

RUSH: Then why does Obama have to get working for you? You don’t have a complaint.

CALLER: Well, my friends have the problem.

CALLER: The softball buddies of mine that I coach can’t even get Obamacare. They have to work two jobs.

RUSH: He’s done the work. The work is done. He’s on to other things now.