Obamacare: If You Like Your Medicine, You Can Pay More to Keep It

RUSH: Tab in Salt Lake City, great to have you on the program. Hello.

CALLER: Yes. Exponential dittos from Salt Lake City, Rush. So glad I got in.

CALLER: I wanted to tell you something that has not been advertised in any of the national news in regards to Obamacare, and that is the price increase on my medications. I’m 52 and disabled. I fell 20 feet from a tree. I have no disks between my L3-4, a shattered foot into 62 pieces, a torn meniscus. Anyway, my medications went up from — this is two months ago — one prescription for pain medication went up from $250 to $1,200.

CALLER: And when I talk to the pharmacist about this, I only get $710 being on disability —

RUSH: Well, you know, Tab, in the past couple days there have been stories about the rising costs of prescriptions and how you’re on your own. Another benefit of Obamacare. But there’s a dual-edged sword to that, too. You shoulda been paying for ’em yourself all along, but that’s unfair to say at this stage. Anyway, I have to take a break. I’ll expand on that before you people have a conniption fit and think that I don’t get it.

RUSH: Let me clarify what I said to Tab from Salt Lake City, because, folks, I was not implying or stating that Tab ought to be paying the $1200 for pain medication for himself. My point was this: What it’s been with health care all along. This is how far gone we are. In my world, in my way of thinking… See, this is how old-fashioned I am, and I admit this. But I believe… I’ve always believed this. It was the way I was raised, so blame my mom and dad.

He said, “If you’re gonna earn money, then you’re gonna start paying to help here in the household.” He took it. I said, “Fine. I don’t need it. I’m 13. What am I gonna do with cash?” Then I started working at the radio station when I was 15 for like 75?? an hour and eventually after three or four years later I?’m making a buck and a quarter. I was living at home. So he took it. When I hit 16, I decided I wanted a Ford Mustang, so I started telling my dad I want a car.

He said, “Well, what are you gonna do about it?”

“It doesn’t work that way.”

So I started cutting out pictures of Ford Mustangs in every magazine and strategically locating them around the house where he would see one wherever he went. Bathroom, kitchen table, just trying to drop hints. Anyway, when I turned 18, my father gave me every dollar I had given him since I was 13. He had put it in the bank, and it had become something like $3500 or $4,000. With that, I bought my first car — with my money, that I had earned.

He took it from me ’cause he didn’t think I woulda saved it, and he was trying to teach me to save it. So that’s just how my brother and I were raised. “If you want something, you buy it, and if you can’t afford it, you don’t get it.” Therefore I didn’t have things I couldn’t afford, and there were a lot of things I wanted for most of my life that I just couldn’t afford. My point with all this is is that at some point the Democrat Party started assuming the role of provider for people’s needs, not just wants.

That was the beginning of the end.

It destroyed the initiative of those people, and it then created expectations among those people, that the government would pay for things, to the point now where we have, in this Obamacare business, the price of prescriptions is senseless. It’s so out of proportion. The price of health care itself is just ballooned. It has no basis in reality. It has no basis in any free market economic reality. The reason is, it isn’t priced for the consumer to pay for it.

It’s priced for third parties to pay for it, governments who don’t care what it costs. Insurance companies who get reimbursed don’t care what it costs. So people at early, impressionable periods in their lives, begin to believe that they don’t have to buy their own prescriptions. There’s something that happened in health care where, after a while, practically everybody began to assume that somebody else should pay for it because it’s either a right or something.

“The Constitution gives a you a free lawyer if you can’t afford it. Health care is a right! You know, why should it cost anybody?” These bastardizations of economic law took over. Now we’ve gotten to the point where all of health care and now prescriptions are priced with no basis in reality. They’re priced such a way that 99% of people country cannot afford them, and so the expectation is that somebody else should pay for it, be it an insurance policy or government or political party or what have you.

The only point that I was making to Tab was had this bastardization not taken place, that if prescriptions had remained priced throughout his life as hotel rooms are, he’d be able to afford it himself. If taxes hadn’t gotten so high and people’s disposable income was so small because the government, state and local, are taking so much of what people earn, they would be able to buy things for themselves, as we used to be able to do in this country.

But the Democrat Party has successfully changed the way most people think, and that is that somebody else ought to buy stuff that we want or need. I don’t know how you roll it back. So how do you have here poor Tab, the guy from Salt Lake City, under Obamacare. One of his medications has gone from $200 a month to $1200 a month, except he’s losing his insurance. He can’t afford it. He has no way of affording it. My only point is, we’re trying to close the barn door after the horses have escaped.

I know that. But none of this would have happened had there not been this assumption by a political party they could get eternal power with vote-buying schemes that ended up providing for people. It’s the single most destructive thing that has happened to this country is the Democrat Party — and maybe not just the Democrats, but this whole mentality in Washington that people are owed something and that there is political gain for a politician seen as providing it.

I am convinced that Obama won election, as much as anything, because he’s seen as Santa Claus. I don’t know anybody who can beat Santa Claus in an election. Obama’s an adult Santa Claus where adults still believe in it, and the bastardization of our economy, in so many areas, has occurred precisely because the Democrat Party (starting with FDR and the New Deal) assumed the role of provider for people. In the process, they destroyed the black family.

They’ve destroyed many family institutions by assuming the role of provider, husband, father, leaving the men free to go out and be whatever they want and not pay attention and be responsible for the kids they’ve procreated. It’s just an abject, total mess, and I was not saying to Tab in Salt Lake City, “Well, buddy, pay for it yourself.” He can’t. That’s the problem. Had the Democrat Party not been involved and their policies not prevailed, none of this bastardization and destruction would have occurred.

I’ll never forget speaking of my dad. One of his best friends was a pediatrician, a family friend, Jim Kinder. I remember them sitting around, I’m 12 years old, and Medicare and Medicaid are getting started, and I’m listening to them complain and warn me, “Son…” I’m 12 years old, and my dad and Dr. Kinder are warning us what’s gonna happen if the government succeeds in socializing medicine or nationalizing it. 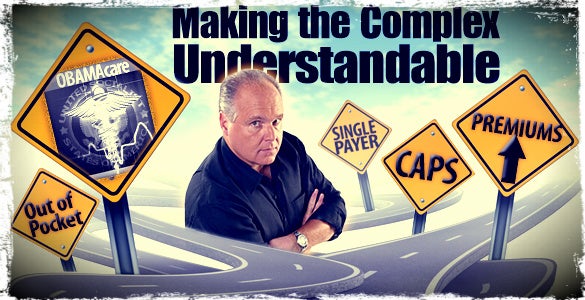 Of course, I’m 12; what do I know? I believe my dad. But H.R. just asked me — that’s a good question, “When did you realize the government was what was…?” How did you phrase it, H.R.? What was it? (interruption) Oh, yeah. He said, “When did you realize you’re getting mugged by the government?” I had to stop and think. Probably age 28 is when I became aware of what taxes were doing.

Yeah, ’cause 28 is when Reagan got elected 1980, ’81. I was 30, and that’s when I started becoming sensitive about what was happening with Reagan talking about tax cuts and so forth, then I started reading National Review and Bill Buckley and that was my tax education. So I was around 28 or 30. His point is, it took me ’til age 28 to realize I was being mugged by the government, and that an unfair, unrealistic percentage of my income was being taken.

His point is that young people today are learning it a lot sooner, like this guy Kevin. He’s learning it at age 19, 20, 21, which is a good thing, actually. Young people are discovering earlier how they’re being mugged than I did. I was at age 28. It’s just a passing little note of some interest. But really, it does amaze me, the millions of Americans who have been corrupted by the Democrat Party, who now actually do believe that providing for themselves is laughable, that this sense of personal responsibility is by the wayside.

I try to think back what my life would be like if… I can just tell you this. If I had lived most of my life with the belief that whatever I wanted was not my responsibility, I wouldn’t be doing this program today. I wouldn’t have become anywhere near successful enough. I wouldn’t have gotten close to being doing this program, and that’s my point. This stuff just kills people’s ambition and their desire, and to know that there’s a political party capitalizing on it, promoting it — and all the while they’re claiming that they’re the ones with compassion and concern and care for people?