RUSH: I want to go to the audio sound bites. This is this morning on CNN. This is Legal View with Ashleigh Banfield. They’re talking about the cold. And they go to some reporter, Stephanie Elam, who is reporting from outside in Minneapolis. Ashleigh Banfield is they infobabe, the anchorette. She says, “What are the circumstances there, Stephanie?” 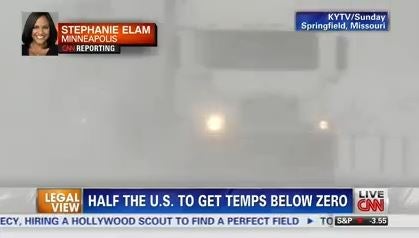 ELAM: I keep trying to find a better word to describe this than “cold,” because it doesn’t do it justice. They’ve even closed down the zoo because they don’t want people thinking that that’s an okay place to go. Crime is way down. The things that they are seeing are more domestic issues, but the street, there’s no one doing anything. It is so brutally cold here and bitter, and it’s not just the air. It’s the air, the wind comes through. I’ve never felt anything like this before, Ashleigh, in my life.

RUSH: Okay, now, that was supposed to stand. “I’ve never felt anything like this before in my life, Ashleigh,” and Ashleigh Banfield, the infobabe, blew it, with this reaction.

BANFIELD: I have. I grew up in it — and let me tell you, Stephanie, I know exactly what you’re going through. I had to report outside in 40 below, and my mouth froze, and I could only talk through just a… It’s just an unusual feeling, and unless you have been through it, you gotta walk a mile in those shoes, and it is very painful. So hats off to you. Don’t hats off you, but everyone else hats off to you.

But Ashleigh Banfield says, “Ah, that’s nothing, I’ve been through it all my life.”

She blew the whole premise by acknowledging that this isn’t anything unusual.