Here’s an Idea: Just Give Democrats What They Want and Get the Issue Off the Table

RUSH: This is Dick Durbin, senator from Illinois, this morning in Washington on the Senate floor right out of the Democrat Playbook 101. 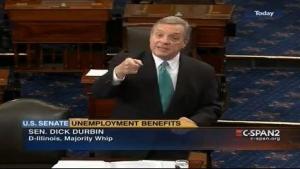 DURBIN: They don’t get it! They say we should be talking about creating jobs. What about creating some food in the bellies of children? This is basic, and it’s humane. It used to be bipartisan before the Tea Party takeover of the Republican Party. I hope there are enough moderates left on the Republican side to join us, to make this a bipartisan issue again. Helping people keep their families together, the lights on, the heat in their homes and food on the table while they’re looking for a job is not a government giveaway. For goodness’ sakes it defines who we are as a nation.

RUSH: And so what do we have? We have a leading Democrat senator impugning the notion of job creation. Impugning the idea of the worth of work and instead trying to convince people of the value of being paid not to work. The value of being paid not to work is, you won’t freeze, your kids will eat, but if it’s left up to the job market to provide for people, that isn’t gonna work. And it won’t if the Democrats continue to rule the roost. Stunning. Stunning. They don’t get it. They say we should be talking about creating jobs, and he impugns that in favor of paying people not to work.

Understand something. The crisis will never go away. It’s not as though after three months of extended unemployment benefits all of a sudden the job market’s gonna open and there will be beaucoup jobs to get. That isn’t gonna happen. Three more months and we’re gonna be right back here where we are asking for it again, with the Republicans being blamed again. Meanwhile, you happen to say that the solution to this is creating an expanding economy with jobs, the Democrats are gonna crucify you as having no heart and no compassion. Just absolutely astounding. Here’s Major Garrett, CBS This Morning, teasing the soap opera, teasing the event that was to unfold later at the White House.

GARRETT: Right now it appears the Senate Democrats and the White House will lose this vote and have to ramp up the rhetoric and negotiate with Republicans to resolve this impasse.

KRAUTHAMMER: It’s still tough times. Unemployment is relatively high and if we were to count the people who quit looking, it would be 11%. So I think what they ought to do is to say, we’ll accept the short term, the three months, but only if you build into the bill an unwinding of this so it has an end date. So we all understand it isn’t an entitlement, it’s a way to help people temporarily. And that would be a good solution.

RUSH: Well, yeah, except that we’ve been doing it for five years. This was a one-time thing in 2008, ladies and gentlemen. We’ve already done that. We’ve already put an end date on it. But the emergency persists, and when the emergency persists, it’s still tough times. And when the emergency still exists and it’s still tough times, unemployment is relatively high. So we’ve gotta do this in the short term. And we’ll keep doing it in the short term because there isn’t anything in place that’s going to change the job outlook. That’s right. This has been going on since 2008. The extension of unemployment benefits. Five years, folks. We’ve built an end every time. We’ve been told it’s temporary every time. Every extension has had an end date.

That’s where we are now. We’re at another end date. And guess what? We’re gonna extend again. Since 2008 I don’t know how many end dates we’ve had, but it’s a lot of them. Damn it, the economy just stays stubborn. It just isn’t improving out there. And a lot of people, it’s tough times. We gotta do what we can to help, but we’ve gotta put an end date to this so it doesn’t become an entitlement. I’d say it’s an entitlement. I’d say after 2008 and 99 weeks of being paid while you’re not working, I think it’s become an entitlement. This is only for three months, and I’m telling you at the end of three months it isn’t gonna be any different. In fact, the only thing that’s gonna be different is it’s gonna be closer to the election, so they’ll come back and do it again.

Attention inside-the-Beltway Republicans. The way to deal with this is to tell the Democrats not three months, you want to extend these emergency benefits to the end of the year and get it off the table. Take the issue away from the Democrats so you can’t be hurt by it during the campaign. And I guarantee you if there are any inside-the-Beltway Republicans who just heard this, they’ll think it’s brilliant and they might actually propose it. “My God, if we got Limbaugh on our side on this what’s to stop us?” Well, it’s what they’ve been doing with every issue, agree with it, get it off the table so it doesn’t hurt us. That’s why they’re doing with amnesty, let’s just get rid of it. The issue’s killing us.