What’s Up in the New Hampshire Skies?

RUSH: Rochester, New Hampshire. This is Sue. Sue, welcome to the program. Great to have you here. Hello.

CALLER: Hello, Rush. It’s great to speak with you. Thank you so much, Mr. Snerdley, for putting my call through. Rush, I’ve been spending a lot of time and prayer and concern and disbelief over everybody being in awe and concerned over the weather pattern and, “Oh, the deep freeze!”

CALLER: You know, there’s record-breaking weather that we’re having in Rochester, New Hampshire. I have been witnessing the chemtrails, the chemical trails of planes that fly above us all in our airspace doing what’s called chemtrails.

CALLER: I’ve been doing a lot of research, and I’ve been reaching out to Senator Kelly Ayotte the Senator Jeanne Shaheen, Congresswoman Carol Shea-Porter trying to get answers for these hazardous blends of barium salt mixture that are altering our weather. It’s very hard to believe, and —

RUSH: What are they telling you?

CALLER: Oh, they’re… Um, Kelly Ayotte sent me a letter that, you know, looked like it was a, you know, no-mind telling me that it was contrails and I —

RUSH: You mean they’re denying it?

RUSH: They are denying that they are putting chemicals and other stuff in these trails? 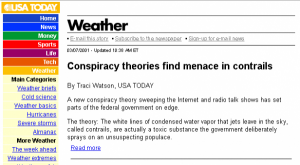 CALLER: I had to go down after my third visit to Carol Shea-Porter’s office. I had to fill out an authorization, supposedly… Well, under the Privacy Act I had to authorize her to inquire on my behalf to the United States Air Force, the Department of Defense and the CIA.

CALLER: That’s the department I was told to put in this authorization.

RUSH: The CIA can’t do this domestically. Now, chemical trails —

CALLER: Well, it was actually —

RUSH: — in the Middle East are one thing.

CALLER: — the United Nations under an agreement that we can do it to our own country, just not unto others.

CALLER: There’s lot of behind the scenes… Well, it’s all part of this big, secretive military program that is supposedly to reverse the effects of global warming. They’re manipulating the weather.

RUSH: Well, I’d say it’s working quite well, if you ask me. I mean, if they’re trying to stop global warming, they may have overdone it with the chemtrails. Did you ever think of that?

CALLER: Oh, it’s very disturbing because I never wanted to know this, and —

RUSH: How did you come across this?

CALLER: I’ve been witnessing it in New Hampshire.

CALLER: They’re in the sky constantly. I’ve been taking pictures and video.

RUSH: What, you mean you’re looking up in the sky —

RUSH: Sort of like a tic-tac-toe board but not quite?

CALLER: Well, they’ve made X’s in our sky. We can see it coming straight, looks like from the ground up from north —

CALLER: Well, they’ve made X’s in our sky. We can see it coming straight, looks like from the ground up from north —

RUSH: Why would they do this in a way that you could notice it?

CALLER: Most people don’t even notice. I’ve talked to people and they’ve never even heard it, and they —

RUSH: Well, they’re not looking up like you are.

CALLER: Exactly. I’ve been praying about this for so long because I’ve been trying to not, you know, burden people with it, because it is very burdensome. However, I want to wake people up so that they’ll join me and demand answers from our government. I mean, the week of the shutdown those jets were above in our sky nonstop for days, you know, and it’s extremely, not to mention —

CALLER: Those chemtrails were being done all during the shutdown.

RUSH: How can that be? The government was shut down.

CALLER: (laughing) Well, that’s a good question. I was down —

RUSH: Did you ask Senator Ayotte’s office about that?

RUSH: That must mean you’re onto them then.

CALLER: Unfortunately — well, not unfortunately. I will gave praise. Carol Shea-Porter, she’s a Democrat, and she’s the only one that’s even given me the time of day.

RUSH: So the Democrat has confirmed the chemtrails? 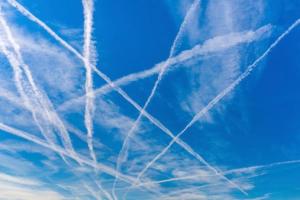 CALLER: They haven’t said anything about confirming or denying, but they made me sign this waiver, this privacy act authorization for her to further investigate because I, you know, using my health issues, I was diagnosed eight years ago, nine years ago with multiple sclerosis and —

CALLER: I’ve been trying to, you know, find out how I could get this disease, and, you know, it’s not in my family history, and —

RUSH: So it’s the chemtrails you think, something’s gone wrong?

RUSH: People may not know this.

RUSH: That the chemtrails can cause all these things. Autism.

RUSH: It’s not just vaccines that have gone wrong.

CALLER: You’re right. I’m so glad that I got through, because, you know, I’ve been a listener of yours forever and ever, and to be able to get through today, where this week I’ve been getting back on fire with, you know, making phone calls and posting pictures and videos and just trying to really wake people up, and I just don’t think it’s accidental that I got through on your line today.

RUSH: It was meant to happen.

CALLER: I actually sent you a letter this summer.

RUSH: It was it meant to happen.

CALLER: I believe it was meant to happen.

RUSH: They don’t believe half of what the Democrats could be doing to people.

CALLER: Well, and, you know what? Jeanne Shaheen’s representative was supposed to be having their environmental person call me, and I have not heard a word. I got extremely emotional because, you know, when I tell ’em not just for the love of my country or —

RUSH: Well, I don’t know. Sue, I’ve gotta go here because of time. I don’t mean to be rude, but they may be trying to call you and the NSA, the CIA may be redirecting calls. You just never know. But I hope that you get to the bottom of it, the chemtrails that are causing all this that you see flying above you. You’ve seen ’em, folks, streaks. Usually behind airplanes. That’s why they’re called chemtrails. Contrails. You think they’re contrails, but they’re actually very insidious things, chemtrails. Okay, Sue, thank you very much. I have to take a brief time-out, folks. We’ll be back here. I don’t know. You know, the whole immigration thing just pales next to this.

RUSH: I checked some e-mail during the break, and some of you people are really skeptics out there. Let me just ask you a question. What’s stranger, the story about chemtrails this woman told us or Obama’s explanation of economics? Paying people not to work creates jobs. Not paying people not to work will lose jobs. Paying people not to work helps utility companies. I think, actually, folks, she might — gotta be very careful. What she thought were chemtrails might have actually just been the polar vortex breaking off. It could be. And maybe they are the same thing. We might never know.