RUSH: Governors are irrelevant. Today, the governor of Utah need not stay in office. He can just quit. You might recall that in Utah government officials just stepped in and said (paraphrased), “You know what? Gay marriage is not legal in this state.” Eric Holder, the attorney general of the United States, says that the federal government “will recognize same-sex marriage in Utah for the purpose of federal benefits, despite the Utah governor’s directive not to, pending the Supreme Court’s review of the state’s ban.”

So the states don’t matter when you’ve the bottom people like Holder and Obama in office. It doesn’t matter what governors do. It doesn’t matter what the people of the state want. What Holder and Obama want is what’s gonna happen. Holder does not have this kind of power or authority, but he does if not body gonna stop him or challenge him. Here is Holder at the Department of Justice website, Justice.gov. He released a video where he announced that the federal government will recognize same-sex marriage, to hell with what the governor says. 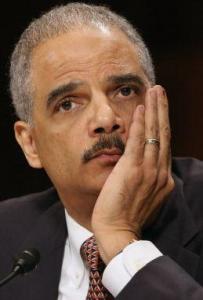 HOLDER: Recently, an administrative step by the Court has cast doubt on same-sex marriages that have been performed in the state of Utah. And the governor has announced that the state will not recognize these marriages pending additional Court action, In the meantime, I am confirming today that, for purposes of federal law, these marriages will be recognized as lawful and considered eligible for all relevant federal benefits on the same terms as other same-sex marriages. These families should not be asked to endure uncertainty regarding their status as the legislation unfolds.

So the law doesn’t mean anything. Existing law doesn’t mean anything if changes to it are being contemplated, and so the people of Utah on same-sex marriage, are now victims and the federal government is just gonna ride in and wave the powerful magic wand and say, “This is the way it’s gonna be!” So who needs governors? What you have now is, you have the attorney general engaging in executive actions, executive orders, just as if Obama were to do it. Stalinists, folks.