RUSH: We’re gonna start with the Fox News Channel, Fox & Friends this morning. They discussed my reaction to Obama pretending to… Well, you know what? He’s not really pretending to be dictator. He was threatening to do dictatorial things a couple of days ago. He said, “You know what? We still haven’t dealt with the inequality and the discrimination and the unfairness that exists in this country!

DOOCY: Rush Limbaugh says what he’s doing is not legal. 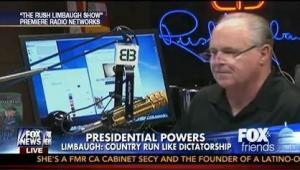 RUSH: Okay. So that is what set up the discussion. Up next, Brian Kilmeade.

KILMEADE: He’s a constitutional lawyer on top of that, so he does know the difference. But, you know, what President Obama would say is, “Yeah, you’re right.” Jobs are scarce, the economy is not having the robust turnaround he projected it to be and most economists expected. That’s why he needs to do these things because Congress is in his way. I can almost hear the speech rolling off his tongue now.

The US Constitution’s first 10 amendments specifically limit government’s power. Well, that’s not cool if you’re Obama or any of today’s liberal Democrats. That, to you, is shackles. They call that “a charter of negative liberties.” Stop and think of that. A document founded in the belief, the proclamation, the declaration, the primacy of individual liberty and freedom is considered “a charter of negative liberties.”

It’s something that gives the people individual primacy and freedom — and, to the left, that’s negative — and the reason they call it “a charter of negative liberties” is because it limits government. They don’t like that, and that’s what Obama was talking about, “You know, the heck with it!” Now Kilmeade says, “Okay, the economy hasn’t turned around despite how he projected it to, and most economists expected.”

This is really a fundamental question for me. What economists expected the stimulus to work? Who are they? We need names, because they’re no longer qualified to weigh in as “experts.” People like Thomas Friedman, Thomas “Loopy” Friedman at the New York Times. Paul Krugman, New York Times. I’m sure a bunch of Ivy League economists really believed this Kenesyan belief that you just flood the zone with federal dollars, and you can’t help but grow the economy.

The problem is, where do the dollars come from? You have to take the dollars out of the private sector first before you flood the zone, so it’s a net-zero effect. Now, if you had a pile of money over there that wasn’t being used (which we don’t), and you flooded the private sector with that, then maybe we could talk about a short-term stimulus. But that’s not possible because we’re $17 trillion in debt.

So there is not a pile of money not being used that you could throw into the private sector and stimulate it. If you’re gonna throw in $1 trillion, you have to first take that trillion dollars from somewhere, and that’s done via taxes and regulations. So bring it down to a more personal level. You’re gonna stimulate your annual income, you’re gonna give yourself a $10,000 raise, but to get it you gotta take it from your bank account.

So you go write a check on your account for $10,000, get it in cash, and you put it in your back pocket, and you think, “I just got a stimulus,” or a raise. You didn’t. You just transferred the money. Net zero. That’s all that stimulus was, and any economist that’s honest and has any kind of economic understanding coulda told anybody it’s gonna be a net wash. In fact, it’s gonna be bad. It is not gonna stimulate anything.

The dirty little secret is that it was never intended to stimulate; it was payoffs to government employee unions and insurance against them being laid off, because all of that is a very intricately woven web of deceit called “money laundering.” The federal government makes sure that union jobs are not eliminated. The people in those jobs pay dues. The dues end up back in the coffers of the Democrat Party and various candidates, because nobody knows how much the unions spend funding Democrat politicians.

So here you take $1 trillion and you put it in “the private sector,” but the vast majority of it goes to state employee unions? Most of that money is gonna come back to the Democrat Party. It was a money-laundering scheme. There was no economic stimulus in this at all, and any economist worth his salt and honest could have said so at the time. Now, there are a bunch of leftist economists who are idiots and do not understand what I just told you and really do believe in this stimulus effect.

But it wasn’t possible. Mathematically it wasn’t possible. Besides, the money was not sent to the private sector in areas that it would stimulate any kind of economic growth. The bridge repairs and road repairs and school spruce-ups. None of the money went there. Folks, it was bogus from the get-go. It was a trick, it was a gigantic trick, and it didn’t stimulate anything except the Democrat Party. That’s all it stimulated. And so the economy had no prayer of growing because of the stimulus. Any economists who said so was simply grossly wrong or dishonest.

And so Obama is saying (imitating Obama), “Well, you know, I’ve done everything. I’ve tried, I’ve worked as hard as I can to create jobs and grow the economy, and those Republicans are standing in my way, to hell with them. I’m just gonna start with my phone and my pen, executive orders to fix this.” Well, the stimulus, I mean, people voted on it, but it was the same kind of stuff he’s talking about doing now. Everything he’s doing is resulting in shrinking the private sector, which is where your job is and where your career is and where your child’s jobs and career happen to be. That is shrinking. Obama is taking more of it each and every day. Health care takes one-sixth of it.

You simply cannot shrink the private sector to the degree Obama has, and at the same time expect there to be massive growth in private sector economic activity, such as jobs, such as careers. Add to this 92 million Americans not working, not in the labor force. This is the biggest scam.

So Obama, using the Limbaugh Theorem, still on the outside, frustrated. He really cares. He’s really tried. He’s wanted to create jobs. He’s worked so hard, but there are these powerful forces, Republicans or whoever, that are not cooperating, and they’re not being bipartisan, and they’re racists and sexists, and they’re standing in his way, and he’s at his wits end now. He desperately wants to help people, so he’s just gonna have to do it himself. And that’s essentially what this scam is. Elisabeth Hasselbeck then weighed in after Kilmeade.

HASSELBECK: By the way, he promised way back before his first term that that would be something he would do, is bring everybody together, unite, the United States of America, going to bring it back, because they can’t function together well, it then gives him the authority under what rule?

RUSH: So Elisabeth Hasselbeck was wondering, what happened to the Obama who was gonna bring people together? That Obama only existed when he went to The View. He’d say that kind of nonsense on The View, and everybody watching The View, “Oh, what a great guy. He’s gonna unite us. He’s gonna bring us together. He’s gonna get rid of all of these arguments, partisanship and all this.” Everything Obama’s doing has been a false promise. The false promise has been: unify the people, great economic recovery, new direction for the United States of America, the world loving us again, our foreign policy being responsible. Everything has been misdirection at best. And so now people, “I thought he was gonna unify. I thought he said he was going to bring everybody together and unite the United States.”

See, it’s all so unnecessary, because if people simply had understood socialists, liberals, leftists, whatever, then they could have, with intelligence, rejected Obama’s promises as empty, ’cause I’m telling you there was no way that what he was promising was gonna happen the way he was going about it. Finally, before we go to the break, they asked Karl Rove — this is actually last night, Greta took this whole thing up, too. She said, “Rush Limbaugh says that the president doesn’t have the power to run the country like a dictator. Is that what the president’s doing with these executive orders? Or is he doing something else?”

ROVE: I’m deeply troubled by the president’s use of his executive authority and abuse of his executive authority. We’re seeing this time and time again. Look, on Obamacare, we had those waivers in 2011 and 2012. We had a year delay of the employer mandate. Where was the authority to do that? They moved the dates for the sign-up and the payment. They have an exemption for certain union plans. They now say that the individual mandate, if your plan that you wanted to keep was taken away from you, you can now declare a hardship and have a nonconforming plan. Where’s the authority to do that? I think he’s violating the law.

RUSH: That’s right. Violating the Constitution — there’s no question about this, folks. It’s just a matter of whether people in power and who have the authority to do so want to stop it. Because if nobody’s gonna stop Obama, he’s gonna be able to keep doing it.