RUSH: The fact that North Carolina Senator Kay Hagan was nowhere to be found when Obama went to North Carolina. That’s the kind of thing that you might not get moved by, but in the deepest, darkest recesses of the liberal Democrat mind, that kind of thing is one of the greatest indicators of presidential trouble that you can find. When a Democrat senator up for reelection refuses a ride on Air Force One, refuses the joint exit down the stairs from Air Force One with the president, and then does not show up at the president’s town hall, whatever it was on — he was giving away, yeah, $700 million. She didn’t want to be anywhere near it and this is the kind of thing that in the deep bowels of the Democrat Party, this is not good. Polling data is one thing, but that’s real world, when one of our rising star senatorettes doesn’t want to show up.

And then, in addition to that, I was reading this blog, a Democrat super PAC is going to be running ads against Obamacare, and they are highlighting a Democrat woman from Arizona, a congresswoman named Ann Kirkpatrick, they’re highlighting her criticism early on of Obamacare as a means of giving her credibility. So a Democrat PAC is prepared to start running ads against Obamacare. And then, I don’t know how this is possible. Yes, I do know how this is possible. Washington Free Beacon: “Centers for Medicaid and Medicare Services official Gary Cohen admitted to Rep. Gregg Harper (R., Miss.) that no one knows how many people have actually paid for Obamacare coverage.” 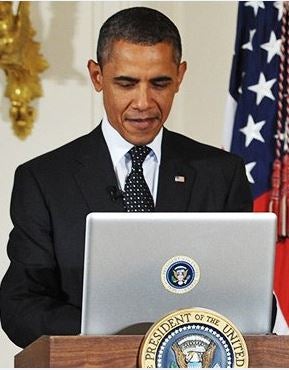 This was said during a congressional hearing on Obamacare. Now, let me repeat this. Gary Cohen, who is an official at the Centers for Medicaid and Medicare Services,admitted to Congressman Gregg Harper (R., Miss.), no one knows how many people have actually paid for Obamacare coverage. Nobody knows. How’s this even possible? Well, who did the website? In three years they couldn’t even get it up and running.

And, by the way, there’s another story today by another security firm advising people: don’t go anywhere near HealthCare.gov if you value your privacy, because there isn’t any. There is no protection. So you have a Democrat senator refusing — she had to get her hair done instead — to appear with Obama when he went to her state. You got a Democrat PAC running anti-Obamacare ads. And now a guy from the Centers for Medicaid and Medicare Services, “I have no idea how many people have actually paid for Obamacare coverage.”