How Did the NFL Get So Popular?

RUSH: Peter Beinart. Remember his name, folks? Yeah, New Republic. He’s got a piece in The Atlantic. “The Questionable Ethics of Teaching My Son to Love Pro Football.” We had a story by Beinart last week that I talked about, and it slipped my mind what it was about. You know, he’s in the Fareed Zakaria GPS demographic. I mean, they’re the same kind of guys.

“Fathers and sons have bonded over football games for generations, but today it’s harder for parents to ignore the growing concerns surrounding the sport. Like countless other middle-aged American men, some of my happiest childhood memories involve watching professional sports with my dad. So it was an unexpected delight when my eight-year-old, previously largely indifferent to my New England Patriots obsession, showed sudden interest a few weeks ago. Last Saturday night, he proudly dug out a long-unused Patriots jersey and joined me on the couch late into the night as the Patriots dispatched the Indianapolis Colts. It was wonderful. And it made me a little sick.

“It made me sick because I could see the game through his eyes. And it wasnÂ’t pretty. My son, unfamiliar with the NFLÂ’s pieties, assumed that hurting the other teamÂ’s players was the goal. To his untutored eye, the violence that guilt-ridden fans like myself decry was a feature, not a bug. He didnÂ’t cheer the injuries; heÂ’s too sweet for that. But despite my insistence to the contrary, I suspect the message he took from the experience was: The only thing you need to know about the large man writhing in agony on the screen is whether heÂ’s on our team.”

There’s a couple more paragraphs of this, but this comes on the heels of Obama saying that he wouldn’t let his son, Trayvon Martin, play football, and Bob Ryan, the Boston Globe, apologizing for helping glamorize a brutal sport that maims. Just drip, drip, drip here, folks. Just keeps coming.

RUSH: I want to finish this Peter Beinart piece. I remember Peter Beinart, we talked about him last week, because he was crowing over the media finally defeating Governor Christie. This is the guy who told Wolf Blitzer last week that it was great to take Christie out because he had a reputation for bipartisanship. He had shown an ability to convince people on immigration and gay marriage and had taken a position more palatable to the kind of voters the Republicans need to win, and he had a big personality. He just didn’t seem like the next Republican in line, and that’s why I think his political wounding is really a danger for the Republican Party. Beinart was worried, this is the end of the Republican Party if Chris Christie’s gone. That’s who we’re talking about here.

And now his piece here in The Atlantic: “The Questionable Ethics of Teaching My Son to Love Pro Football.” I left off with his assertion, “The only thing you need to know about the large man writhing in agony on the screen is whether heÂ’s on our team.” That’s what his eight-year-old son, he thinks, is learning watching the game. Here you have all of these egghead, these pointy head intellectuals sitting up there in the Northeastern corridor believing all this stuff about brain cells being damaged by the concussions and this stuff, and they don’t know what’s happening in real America.

Real America such as Belle Glade, Florida, and the bowels and heartland of Texas. These people are out playing this game, and they’re trying to get good at it. It’s their ticket out of wherever they are, and they’re not gonna be able to talk these people out of it. The only way they’re gonna succeed here is to ban this game. They’re not gonna be able to persuade people not to play it, try as they might.

Now, picking up with his column: “When my dad made me a football fan,” get this, “the press wasnÂ’t filled with stories about the way repeated blows to the head erode brain tissue, causing a lifetime of confusion, depression, aggression, dementia, and memory loss.” By the way, there is no evidence that football is the sole reason, but, see, this guy has bought this premise hook, line, and sinker. It’s like we had the news last week that a woman researcher has disproven the notion that football players are six times more likely to commit suicide. She found it’s just the opposite, that the percentage of suicides in America, the number of people that played football were six times less than the general population. It’s exact opposite of what the media has been saying.

So, anyway, this guy, yeah, when I was learning about football, and my dad was teaching me, the media wasn’t filled with all this stuff about how football causes “a lifetime of confusion, depression, aggression, dementia, and memory loss. Former players didnÂ’t attach suicide notes like the one found in 2011 in the apartment of former Chicago Bears safety Dave Duerson, which read, ‘Please, see that my brain is given to the NFLÂ’s brain bank.’ So my father canÂ’t be blamed for fostering in me an emotional attachment to football that overrides the moral analysis IÂ’d apply to some other activity that physically and mentally disfigures its participants.”

I warned everybody that this stuff was going to happen.

“I, on the other hand, have no such excuse. I could, perhaps, break the chain. Whether he realizes it or not, my son likes watching football for the same reason I did: because itÂ’s intimate time with his dad. If I didnÂ’t let watching football become one of the things we shared, if I told him itÂ’s something I regret, he might take to it anyway. But it would be less likely. And if he made it to adulthood without heartwarming memories of sitting alongside his old man watching other men pulverize their bodies and minds, heÂ’d be more able to rationally decide whether professional football is something a decent society should allow.”

I’m telling you, it’s the media that makes its living covering this sport in large part that is going to end up perhaps doing it great damage. Bob Ryan. In fact, this one I’m surprised at. I’m surprised that the piece he wrote has not gotten wide play. Bob Ryan, who is leading sportswriter for the Boston Globe, renowned, universally accepted as the best in his day. And he’s now a sportswriter emeritus. He’s all over ESPN. He’s one of these guys that within the industry has impeccable integrity and credibility. If Bob Ryan says it, it’s gold with other sportswriters.

He had this piece apologizing for his role in popularizing a sport which maims and brutalizes participants. And it just sat there. Now, I don’t watch ESPN. I don’t know if it was talked about there. But I do a lot, as you know, of reading, and I didn’t see anything beyond his story. So I don’t know what ramifications there were from it, if any, but now this. My son will now be “more able to rationally decide whether professional football is something a decent society should allow.”

Let me ask you a question. I want you all to think about this for a second. I don’t necessarily want you to call and answer it right now, unless you have an immediate answer that’s totally encompassing the question, but it’s a very simple question.

How did the National Football League get so popular?

In our lifetimes Major League Baseball was the national pastime. Major League Baseball was it. Pro football happened, and it had its legion of fans. But it’s only relatively recently that it has become the most watched television program whenever it’s on. What is it that’s made the NFL, specifically the NFL — college football, the reasons for fandom there are different. Well, there’s some overlapping, but there are also some distinct differences. What is it about the NFL that has made it this popular, do you think?

Is it because fans are watching to see grown men be ruined for life via injury? Is that it? Is it because the fans know it is indecent and barbaric and we are no different than they ancient Romans trekking to the Colosseum to see whoever was going to be killed that day? 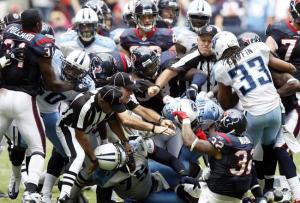 Why is the National Football League so popular and how did it happen? Let me remind you of something that will not help you with your answer. It’s just an interesting factoid. When I worked for the Royals ’79 to ’83 in the marketing department, yeah, I knew the people that worked over at the Chiefs and played our Thursday afternoon touch football games. The front offices competed after the baseball season ended, and we’d share marketing materials.

It was the early eighties, and the NFL had sent out a little flier that they wanted their teams to post in the office, the marketing departments, to let them know what their task was. The flier said something that astounded me. “If you know,” it said, “that more people go bowling in one week than attend NFL games in a season, then you know America.” The NFL chose this mechanism to tell its marketing people how far they had to go to get this game mainstreamed, and in the eighties it was big.

Now, as you ponder the answer to your question, remember what fired up a large percentage of this country last night after the game. A post-game rant interview by one of the stars of the game created a nationwide buzz, for a while, and converted millions of people to automatic fans of the Denver Broncos. Richard Sherman. I still suggest that you find some things that Richard Sherman has written, and you’ll be amazed. I’m telling you, the guy is smart. He’s really knows his business. He knows his craft. He has studied it. It’ll shock you if what you saw of Richard Sherman last night is all you think Richard Sherman is. 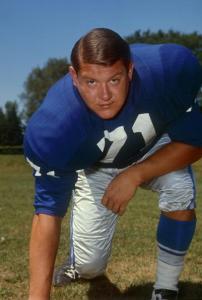 CALLER: A fan of many years. I’m 60 years old. I’m a sports fan from when I was a kid. What we love as males, men in this country, we gotta admit deep down, we love violent sports. I love football. I watch football because of the fact I might see a great hit. I remember the days of Alex Karras and the Fearsome Foursome from Detroit. But, you know, ESPN, I’ll tell you this —

RUSH: No, the Fearsome Foursome was the Rams, but okay, so you like the big hits?

CALLER: It’s why I watch it.

CALLER: We loved to hit each other.

CALLER: Let me tell you something, Rush. It’s macho-ism.

CALLER: It’s the way God made us.

CALLER: He made us as men and women different.

CALLER: Thank you. And hockey? Our favorite saying way back when was, “I went to a fight and a hockey game broke out.”

RUSH: I’ll tell you something else about when you’re playing football and you don’t have any equipment. As a kid, you’re playing backyard tackle football. When one of you gets hurt, you know what happens? You go find somebody to replace him. You don’t cry about it. You just get the kid whatever he needs and then you find a replacement and you keep playing. Of course, there are many more reasons for its popularity.