RUSH: Quick. How many of you have heard the name Bob McDonnell? Quick. If you haven’t heard of him, he was the governor of Virginia for a few years. I have to tell you, I had no idea he was a threat to Hillary Clinton. I didn’t even know that McDonnell was planning on running for president. But he must be doing something because the Democrats, after he’s left office, have indicted him out there.

RUSH: I’m gonna tell you what’s really going on with this. And I don’t mean to make light of charges. I mean, here’s what’s alleged. Bob McDonnell, the recent governor of Virginia and his wife, it is alleged, were given lavish gifts over the years, like a Rolex watch and designer clothes and $140,000 in cash. They also allegedly got free rides on jet airplanes and a joyride in a Ferrari. So these are very serious charges, unless you’re a Democrat, and then this is standard operating procedure. The only thing that didn’t happen here is McDonnell did not go to the Dominican Republic and fall asleep on the beach like Charlie Rangel did. I don’t think McDonnell had two offices, one of which was his home, both paid for by the government.

I’ll tell you what this is. I was joking. McDonnell’s not seeking the office of president. You know what this is? You gotta keep everything in perspective. You gotta look at this through the prism of the effect or the impact of a story like this on low-information voters. The reason that they went after DeLay, and the reason they’re going after Bob McDonnell is kind of like Saxby Chambliss. If it weren’t for his varicose veins, this would be a totally colorless guy, and yet they’re going after this guy, and the reason is very simple.

They are charging this guy — noted Republican — by the way, you don’t have any problem seeing the word “Republican” in every story about Bob McDonnell. If he were a Democrat that wouldn’t be in the story. But he’s a Republican and it’s plastered everywhere. The purpose here is to create the image or to further the image that’s already been created that Republicans are corrupt. They’re in powwow situations with the rich. They hang around with rich criminal CEOs, and the rich criminal CEOs give them things in exchange for favorable policy decisions from McDonnell. And that’s what this is. 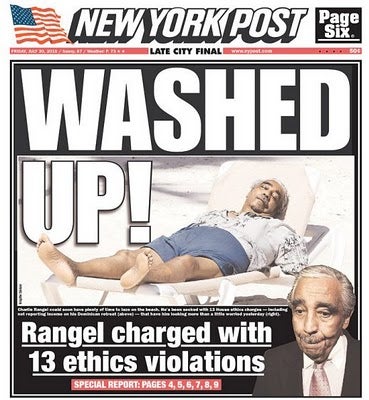 So he gets indicted, there are the charges, and out there in low-information-ville, the reaction is, “See, these Republicans are just corrupt, just cheats. They’re frauds. They hang around with the rich. They screw us and they don’t care.” That’s why they do it. If he’s convicted or not, irrelevant. The mission, essentially, here is already accomplished. If you’re a Democrat, on the other hand, all this would be chalked up to run-of-the-mill crony capitalism. I mean, did anybody go to jail over Whitewater? I mean, any politician? How about Cattlegate? Hillary gave 10 grand to Robert “Red” Bone, and it turned into a hundred grand in the cattle futures market, the pig futures, whatever, and she said (paraphrasing), “Well, I read the Wall Street Journal, that’s how I learned to do that.” Oh, okay. That explains it.

How about all the various Clinton foundations? How about any of Obama’s kickback schemes? You want to talk about kickback schemes, how about every green energy deal that Obama has been involved in? Which is nothing more than Democrat Party money laundering. How about Michelle’s no-show job at the Chicago hospital, $357,000 a year just to show — well, she did show up now and then to come up with plans to encourage the poor not to use that hospital. I’m not making it up. Not making it up. So the purpose here is to simply further the image, the brand of the Republicans as cheats, associates of the rich, corrupt, stealing from the poor, in bed with the corrupt rich, that kind of thing. And the indictment coming after he leaves office.

Let’s keep in mind, by the way, too — this is very important to point out — that while in office, the conservative, McDonnell, did his best to be bipartisan and to reach across the aisle, and we see all the good that it did him. Now, if this stuff is true, this is literally stupid. Accepting a Rolex watch and $140,000 in cash? How dumb do you have to be to do that? I mean, all he would have had to do was wait ’til after he served, is out of office.

If he wanted to start raking in the big bucks, he could have started a foundation, started giving speeches for whatever, $30,000 (I don’t know what the going rate is), and really started selling his influence the old fashioned way, the Clinton way: After you’re out of office. Sell access afterwards, the lobbyist-type stuff. But this is chump change. What is the potential jail time here? It’s big if he gets convicted.

A joyride in a Ferrari is a political crime. What about Bob Menendez, the senator from New Jersey? How many free trips on private jets did he take down to essentially whorehouses in the Dominican or whatever was going on down there? Illicit women on the premises, wherever he was. We’re just told, “Well, nothing to see here! I mean, Menendez is a nice guy. He’s pro-choice and cares about the poor so there’s nothing to see.”