RUSH: There’s a big drought out in California. Fifteen years ago it was the drought of the century. I remember I’d go to California and in the hotel rooms there would be signs: “Please use the towels more than once, if you can. Please use half the amount of water you would drinking from the faucet. Please try to shorten the length of your shower by 50%.” There were all these signs all over the hotels. And then it stopped. I figured, well, the drought is over. But apparently not.

I guess this is the Christian Science Monitor. How does a newspaper succeed with the name “Christian” in it? Why doesn’t the Drive-By Media hate this thing? Oh, yeah, Christian Science Monitor. Yeah, yeah, yeah, yeah. So it’s okay. “While much of the United States has experienced a weather year with fewer extremes and an easing drought, the record-breaking California drought — the worst since 1895 — is not leaving the region anytime soon, according to climatologists. The unseasonal balmy but dry weather is the result of an equally unprecedented high pressure ridge lurking offshore and blocking the typical winter storms needed to drop precipitation all along the West Coast.”

Now, that’s true. I remember when I lived in Sacramento, the wintertime, that was the rainy season. You could see those storms coming in across the Pacific and they would dump rain and snow in the northern part of California. The snow melt would then provide a lot of the water for the rest of the year, including for Southern California, which had to steal it from Northern California ’cause it never rains in Southern California no matter what. So the upshot here is that climate scientists are puzzled by the persistence of this ridge, this high-pressure ridge off the coast. It won’t leave and it’s blocking those much-needed winter rainstorms from getting in there.

Well, I have a theory, ladies and gentlemen. And I would like to use the left’s logic of causation in explaining my theory to explain this. The left believes that man is causing climate change, right? And the left believes that exorbitant levels of CO2 are creating greenhouse gases, which is making the earth insufferable. In fact, they even maintain in this record cold and record snow that it doesn’t mean that the world isn’t getting warmer. Even when scientists heading to Antarctica to discover the melting ice get stuck in larger Antarctic ice than anybody knew existed and had to have three different rescue attempts, they still maintain that global warming is taking place, right?

They believe that gasoline and oil are horrible and rotten and poisonous and vicious and mean and destructive. And so Californians more than any other have acted to reduce their own carbon footprint. So the possibility is that maybe that by tinkering with CO2 levels, maybe Californians have caused the high-pressure ridge, and therefore the drought that is gripping their state. After all, this drought began after years of California’s greenhouse gas reductions; after years of tamping down emissions; after years of economic recession by reducing the prevalence of fossil fuels.

Could it well be that in the words of that famous pastor, “California’s chickens have come home to roost”? Could it be that California’s crazy have created a newfangled vortex? And this is not a polar vortex. This is the Algore vortex. This is a high ridge pressure they’ve created, which is causing their drought. “Oh, come on, Rush, don’t be silly.” What do you mean, don’t be silly? If we can cause the climate to warm, if we can destroy the planet, if we can, by living our lives and progressing in our lives technologically, if we can end up heating up the planet, putting out all that CO2 and doing all this damage, then why the hell can’t we cause a drought?

Yes, we can! Yes, we can create a drought. We did it. I think Californians ought to be proud. I think they ought to be claiming credit for it. Governor Brown ought to be saying, “See, this is evidence of what man can do in saving the planet.” I mean, I could sit here and say I can find some scientists who would agree with me. I’m sure I could get a couple of them to e-mail me right now that that would agree with my theory that all of these crazies and their newfangled vortexes and CO2 reductions have pretty much locked in that high-pressure ridge.

So, Governor Brown, Californians, when you’re looking for someone to blame, look no further than who you see in the mirror. In fact: “Scientists are uncertain as to why the ridge has stubbornly refused to break down and allow incoming storms to hit land. Climate change may be one of many factors, suggests Mr. Fuchs.” Amen, climate change, manmade Californian climate change. Except, what they thought they were doing to improve things is actually destroying the state. I love it. I have become a manmade convert, a manmade global warming convert because I can now explain the high-pressure ridge that is causing California to thirst.

You watch. Do you think there will be any takers on this theory? Really? No takers? (interruption) Take a shot at me? Well, I’m advancing the theory that they’ve espoused. I am proclaiming that I think that maybe by tinkering and reducing their CO2 levels, they created a high-pressure ridge that won’t move. They’ve locked it in there. (laughing) High pressure deniers, not gonna believe it?

Aw, darn. Here was my one effort to bridge understanding with them. Bipartisanship, cooperation, level of understanding, using government Christie as a role model here. I’m trying to forge an understanding with the people of California to help them to understand why it is they’re dying of thirst. Maybe they did it. Because they think they’ve been successful. They’re gonna they’re showing the way for the rest of the world.

Anyway, the Smithsonian Institute is the source of this next one: “Air Pollution in China Is Spreading Across the Pacific to the US,” right into Washington and California. “The most tangible environmental impact of China’s enormous manufacturing industry is very localized: Remarkably bad urban air quality in China that occasionally closes schools, has entrepreneurs selling canned air and has caused an estimated 1.2 million premature deaths.”

Air pollution in China is causing death and it is spreading across the Pacific to the US, but it’s not getting to us because the high-pressure ridge in California is blocking it. So we’re safe. But I remembered seeing something recently. Yeah, there was a story out of the United Nations, the intergovernmental panel on whatever, and they said that communism was the best way to fight global warming. So I went back, and, lo and behold, my memory was proved correct, as it always is.

“UN Climate Chief Says Communism is Best Way to Fight Global Warming.” And the pull quote: The UN climate chief, Christiana Figueres, “stated earlier this week that democracy is a poor political system for fighting global warming. She also said that communist China is instead the best model. Even though China is the worldÂ’s top emitter of carbon dioxide and struggles with major pollution issues of their own, apparently Ms. Figueres thinks that means they are ‘doing it right’ when it comes to fighting global warming.” I kid you not. 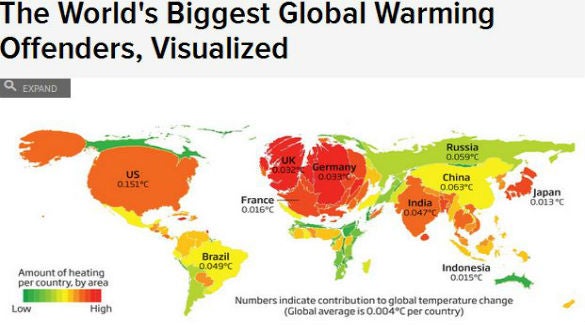 So here you have air pollution so bad that 1.2 million people claim to have died from it, and the UN says that communism is the best way to fight global warming even despite that — and then I remembered I saw a map that some little tech blogger put together, the last 95 years of global warming. The map was the nations of the world color-coded and enlarged to show their impact on global warming.

The red and orange colored nations were the greatest culprits, they were the number one creators of destructive global warming — and by gosh, if it wasn’t true, every one of them was a capitalist country! The United States was huge, the UK was huge, India was huge, Japan was huge. Among the smallest contributors were the ChiComs and other communist countries — and that, of course, is bogus. They’re the biggest contributors.

They have the most pollution, because they’ve got the least technology or the oldest technology. So now you got the UN climate chief saying that communism is the best way to fight global warming. That’s what it’s all about. That claim right there, folks, in a nutshell, is what the whole issue of global warming is all about: The spread of communism — which for our purposes means expansive government, tax increases, more and more people dependent on government.

Total authoritarianism, and totalitarian control. That’s what it means. That’s what global warming is. It’s merely a platform to advance communism. That’s all it is. It’s not about science. It’s not about warming. It’s not about the climate. It’s about convincing people that they, simply by living their lives with progress, are destroying the planet — and in order to pay the price, to make amends, in order to be absolved of that sin, you must agree for your government to become even bigger and more powerful.

You must agree to pay punitive taxes to make amends for the damage and the destruction you’ve wrought, and that’s all it is, folks. That, in a nutshell, is what global warming is. Those are not my words. “UN Climate Chief Says Communism is Best Way to Fight Global Warming,” while in communist countries have the greatest pollution and people are dying from it. It’s a scam. It’s a total left-wing scam. Textbook.