RUSH: This New York Times piece — I mentioned this right before the end of the first hour. I mean, you talk about a total disconnect. This is “live by the Limbaugh Theorem and die by the Limbaugh Theorem,” which is to say that you cannot claim that you have nothing to do with the economy and then turn around and try to take credit for when it supposedly improves, which it hasn’t. Now, in certain places it has.

Where fracking is going on, it’s booming. Where conservative governors are implementing conservative policies, it’s booming. The private sectors in those states and the nation are shrinking. Yet here comes the New York Times. Jackie Calmes is the writer. The story is: “Obama’s Puzzle: Economy Rarely Better, Approval Rarely Worse,” and they’re troubled out there. They’re wringing their hands over the fact that no matter where you look, Obama’s personal polling numbers are tanking.

It’s not just about Obama personally but people’s opinions about the future of the country. Everything’s tanking — Obamacare, you name it — except in states where there’s economic activity from either the oil industry fracking or Scott Walker. Conservative governors are overriding what’s happening nationally. There are pockets-of-exceptions to this. “President Obama will pronounce on the state of the [Coup] for the fifth time on Tuesday, and never during his time in office has the state of the economy been better…”

Even that, folks. “Never during his time in office has the state of the economy been better — yet rarely has he gotten such low marks from the public for his handling of it.” This is hilarious. Never mind this is still the worst economic recovery in the history of this nation, and the reality is… I’m gonna tell you what the reality is.

That’s why Obama’s constantly, for five years, been on the campaign trail, acting as though he’s running against what’s happening in Washington, even though what’s happening in Washington is by virtue of his pen, by virtue of his ideas. This is the Limbaugh Theorem. Obama escapes all accountability, except the time’s run out now. Now he is being held accountable. This philosophy, this idea, this practice can only work for so long.

At some point, there’s gotta be an uptick, and there isn’t and hasn’t been an uptick, and now starting in year six, even low-information people start saying, “Wait a minute. How can this be Bush’s fault?” or, “What do you mean, Mr. President? You’re out there campaigning against what’s happening in Washington? You are Washington, and you’re out there talking about using executive powers and going around Congress?”

You know, there’s another hilarious thing to remember. Remember how Obama used to worry during the campaign that Romney would get elected and take credit for the economy turning around? You remember that? I have never forgotten that. It was one of the things that Obama was telling his fundraisers at these little private party fundraisers, one of the things he really worried about as he’s trying to gin up his base. 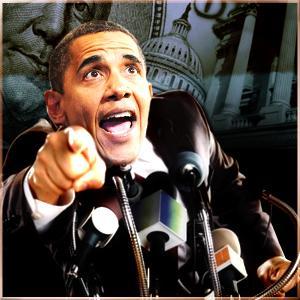 He was trying to rev up the base, and he was worried. “You know, it really worries me that Romney’s gonna win the election and our recovery is gonna kick in shortly after, and he’s gonna get the credit for what we did, and we can’t let that happen.” ‘Cause Obama predicted it would take off right after the election, this last past election. Now, here we are, 14 months since the election, and the economy still hasn’t taken off, and nobody’s worried about getting the credit for it.

Even the New York Times can’t make a convincing case that it is improving. They just put it in the headline. Now, Ron Fournier… This is kind of curious to me. Ron Fournier is the former bureau chief AP, White House correspondent, now at the National Journal. He has been somewhat and occasionally hypercritical of Obama in recent months. He’s got a piece out today, and he says: The problem is you, Barack. It’s not Rush Limbaugh, and it’s not Fox News.

Now, he doesn’t specifically say that, but that is his point. “A Pen, a Phone, and a Flailing President — The White House’s problem might not be strategies and tactics.” It might be Obama himself. It might be Obama himself. He cites here a Democrat strategy memo confirming the Obama critique distant, unfocused, communications are poor. He’s somebody who’s not engaged. He was distant in meetings before the disastrous health care rollout.

It’s all the things that have been learned, Obama didn’t know this and he didn’t know that, and Fournier is simply remembering all of that and saying: Hey, you can sit there and you can blame all these other people, but the problem is you and the problem is your White House. Now if Fournier had this published in the New York Times, it would make the rest of the media. As such, it will remain buried.

That 31% is probably closer to 25, ’cause they always goose their results. And on the eve of Tuesday’s State of the Coup address, “more than 6-in-10 Americans believe that the nation is headed in the wrong direction and 70 percent are dissatisfied with the economy.” It’s against this backdrop that the president makes his State of the Coup address tonight, and it’s gonna focus on immigration reform, inequality, the minimum wage, you know, all of the go-to issues that the Democrat Party constantly retreats to when they’re in trouble to rouse dependence class, to rouse the welfare state, to rouse and rile up and awaken their base.

Washington Post headline: “Democrats Hope Obama’s State of Union Speech Will be Start of Populist Agenda.” They hope that what Obama’s going to do is actually break away from class warfare. There are Democrats in this story quoted as suggesting that the Democrats need to go to bread-and-butter issues and less of this talk about inequality. Stop talking about income inequality. Stop talking about welfare state. Stop talking about unfairness and all that. So I think the Democrats outside the Beltway — well, inside the Beltway, too, I think looking through their prism of electability, they think things are in a mess and in trouble.

But you have to understand this, too. These are true believers. They really believed that everything Obama was gonna do was gonna create a utopia. They really believed this stuff. When Pete Seeger sang, they bought it all. Peter, Paul, and Mary sing it too, they buy it all. They thought this was all gonna create a utopia. They thought Obama was gonna be universally loved. They thought they were being set up for lifetime rule over Washington, DC. These people live and die by polls. They do not make direct connections with individual voters. The only way they are in touch with public moods and attitudes is by virtue of polls, and then the occasional election.

So they only know you by what you say to pollsters, and they look at these latest polls, and they are apoplectic about it. It wasn’t supposed to be this way. They think the Republicans are the absolute best enemy they could have, nobody likes them, they’re the biggest villains in the world. By virtue of that alone, people ought to be willing to make Obama king, in their view. But it isn’t working that way. The American people — and, to me, this is very uplifting, positive stuff, frankly, as we have sat around for years now and wondered, are we losing the country? And when will they realize? How long was it gonna take ’em?

The power of the presidency is an amazing thing to average Americans. The occupant of that office is given latitude, leeway, time. It takes a long time for people on their own to sour on a president. It took the media how many years to get ’em to sour on Bush? Between four and six? How many years did it take ’em to get the media to sour on Nixon? Before Watergate. They hated Nixon from day one. They were unable to sour the people on Reagan. But they tried.

To you and I it’s been obvious since about the first week that we were headed for disaster, and then the Tea Party figured it out and formed in 2010, and we’ve been wondering, when are the people of this country gonna figure it out and why haven’t they figured it out? And that is why I came up with the Limbaugh Theorem to explain it, because Obama has actually positioned himself to be unaccountable. He’s not responsible for anything. He hates it, too, is what people thought. Look, he’s always out there, he’s talking about how bad the job market is, he’s working hard on that, and he’s upset about income inequality, and upset about health care, he’s working so hard to fix it.

People give the president the benefit of the doubt much longer than any other elective office. There’s that reverence and respect for it. And we’re wondering, how long is it gonna take people to see this guy? ‘Cause we knew once they did, there’d be no coming back from it. You know, live by the media, die by the media. Live by polls, die by polls. Live by the Limbaugh Theorem, die by the Limbaugh Theorem. Once the bloom was off the rose, once Obama was seen for who he really is, once he lost this massive messianic appeal, that’s not the kind of thing that they could get back. The Democrats have always thought they could get it back. They can’t. And now they’re nonplussed.