RUSH: Have you heard about this? This is a serious allegation. It’s about Eli Manning and the New York Giants. Quarterback Eli Manning and the New York Giants brass are accused in a lawsuit of creating bogus “game-worn” football gear to pass off as the real deal. And the lawsuit claims that one of the forgeries is actually sitting in the Pro Football Hall of Fame. A helmet on display at the Football Hall of Fame in Canton supposedly was worn by Eli Manning in the 2008 Super Bowl win over the New England Patriots. That’s the one where David Tyree made the catch on his helmet.

It is claimed that that helmet was never used in a game. That it’s fake, it’s been roughed up, it’s been scuffed up and it was sent there but that Manning wants to keep his original gear himself. So he goes to the equipment manager and says (imitating Manning), “You know, scuff up some jerseys and rip ’em and cut ’em and tear ’em and then sew ’em back up, put some grass stains on ’em and make ’em look used.” The lawsuit also charges the official dry cleaner of the Giants, somebody in Moonachie, which is right down the road from the stadium, of being involved in this.

It says here, “The memorabilia ruse is so common among Giants players and staffers, the documents claim, that team equipment manager Joe Skiba openly discussed ManningÂ’s fake game gear on an official Giants e-mail account.” The lawsuit comes out this week and the timing, of course, is not coincidental, because Eli’s brother, Peyton, is a quarterback for the Denver Broncos.

RUSH: This story is big. “The allegations are part of a civil-racketeering, breach-of-contract, malicious-prosecution and trade-libel suit filed Wednesday in Bergen County Superior Court by sports collector Eric Inselberg. In one startling claim, the suit says Barry Barone, who has been the GiantsÂ’ dry cleaner since 1982, used his Rutherford, NJ, Park Cleaners store to beat up jerseys and other items at the behest of longtime locker-room manager Ed Wagner Jr.”

The guy names names here. The Giants equipment manager, the locker room manager, Eli Manning. The Giants ownership is dragged into this. And it says here in The New York Post that “the lawsuit is InselbergÂ’s attempt at retribution against the Giants. Among the many scathing claims that could tarnish Eli ManningÂ’s squeaky-clean image is an alleged 2005 incident in which he allegedly asked Joe Skiba for an old, beat-up game helmet — and then took the headgear, signed it, and put it on the market, ‘falsely claiming that it was a helmet used during his 2004 rookie season.'” 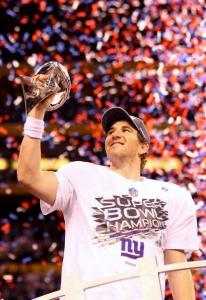 Now, I know a little bit about this from my days at the Kansas City Royals. Not this specifically, but about how this is all done. These are prized items. I don’t know how it is in the NFL anymore. But it wasn’t that long ago that the players got two home jerseys and two road jerseys a season, that was it, and if they got ripped, they got sewn up. You might think that they’re limitless jerseys in those locker rooms, get dirty and whatever. Now, Michael Jordan, when he played with the Bulls, he wore a different pair of Air Jordans every night, and those shoes every day went to charity.

Major League Baseball jerseys are the same way. Now, it could be with arrangements now, that they’ve got deals with the manufacturers, it could be that players are wearing a brand-new jersey every game and that game jersey every game is going somewhere, charity or what have you. It used to not be that way. They used to only get two home jerseys and road jerseys a season, had to make do with ’em. But even so, they’re hard to get. And the players do want to keep the real stuff, for their own collections.

This is a serious, serious charge here against the Giants. If they’ve got forged stuff in the Hall of Fame? You know, I know a lot of people with the Giants. I just can’t see this happening. (interruption) How are we gonna get to the bottom of it? Investigation? Where? Well, I don’t know that I have the light of truth on this.

Let me take a brief time-out, folks. You just — you sit tight, and we’ll be back right after this. Don’t go anywhere.

RUSH: Now, this Giants thing. You know, folks, one of the ways this got triggered was that somebody who thought he’d bought a legitimate game-worn jersey was watching a Giants game, and the jersey Manning was wearing had things on it that his didn’t. Now, a locker room jersey in the NFL is nothing like what you buy.

Even if you go to the NFL or your team website and buy the full-fledged NFL replica jersey, which is 250 bucks, you’re still not getting a locker room jersey. They are tailored for each player. They’re sized, tailored, trimmed. Every jersey has the year that it was worn below the label, which is in the lower-left bottom of the jersey. Well, it used to be. Now that they don’t tuck the jerseys, that’s another thing.

You go out and buy a real replica jersey, and it’s gonna go down to your knees when you put it on. But the players don’t tuck the jerseys in anymore, most of them don’t. The linemen do, but the quarterbacks and receivers, they’re not tucking ’em in. So they’re trimmed at the bottom and hemmed to make it look like they’re perfect length. They go to the belt line. They make it look like they’re tucked in, but they’re not.

Getting a locker room jersey is a really, really tough thing to do because there aren’t that many. The Dolphins have a woman that is singularly responsible for tailoring them to each individual player. Sometimes they come from the manufacturer with the nameplate and the number on. Sometimes the teams do that themselves, the equipment manager. But there are all kinds of things in a game jersey that…

Even the stripes in a replica jersey bought in store are different. Look at the Steelers. I don’t know how to describe this. You watch a Steelers game, and the sleeves on those jerseys are sewn so that the three gold stripes are plainly visible. You go buy a jersey from the store, and those stripes are on the sleeve but closer to the elbow. They’re further down. It’s not a game jersey. It’s not a locker room jersey.

They’re just not. It’s the same material. If you’re buying one that’s the $250 job, that’s the same material. It’s the identical material that’s used, and it is made for the same specs in terms of logos, markings, stripes, colors. But it’s not a locker room jersey. That’s why there’s real value in this stuff — locker room equipment, game-worn stuff. It is big, big money in this stuff, and there’s not that much of it.

You only got 16 games a year that count.

So this stuff fascinates me, you can tell.

RUSH: That is. That is not good. Fox News Channel just brought out the grim reaper, Geraldo Rivera, to talk about the lawsuit alleging scams in game-worn, game-used gear from the New York Giants. Did somebody die as a result of this? ‘Cause that’s generally when they bring Geraldo out, when somebody’s dead. I don’t think that’s happened, but it’s not a good sign when they bring Geraldo out. It never is.