RUSH: I hate to pile on here, but here’s the AP: “US Economy May Be Stuck in Slow Lane for Long Run.” It’s a long and depressing read about the economy from the AP, and there’s no happy talk in this. I find this fascinating. Normally when you get an economic story from the AP, it’s how the job market is “showing signs of recovery.” Even though we’re losing jobs every week, it’s still a healthy market! “We’ve got signs of recovery.” In this one, there’s none of it.

It’s like the media masters have taken their cue now from the Regime: “Okay, let’s end the happy talk on an economic recovery. Job creation ain’t happening. That’s not gonna be our meme now. Our campaign theme is, ‘It’s utter disaster and here’s how you benefit!'” AP: “In the 4-1/2 years since the Great Recession ended, millions of Americans who have gone without jobs or raises have found themselves wondering something about the economic recovery: Is this as good as it gets?

“It increasingly looks that way,” says the AP. “Two straight weak job reports have raised doubts about economists’ predictions of breakout growth in 2014. The global economy is showing signs of slowing — again. Manufacturing has slumped. Fewer people are signing contracts to buy homes. Global stock markets have sunk as anxiety has gripped developing nations. Some long-term trends are equally dispiriting.

“The Congressional Budget Office foresees growth picking up through 2016, only to weaken starting in 2017,” which would coincide with the election of the next president, see? “By the CBO’s reckoning, the economy will soon slam into a demographic wall: The vast baby boom generation will retire.” No, it won’t, because it can’t afford to! “Their exodus will shrink the share of Americans who are working, which will hamper the economy’s ability to accelerate.

“At the same time, the government may have to borrow more, raise taxes or cut spending to support Social Security…” I’ve never seen this in the Obama years. This is the first dire, no-hope economic story since Obama took office — and it dovetails, it coincides with exactly the position the Regime took on the CBO report last week. But, folks, it’s dire, and they get into the demographics of the country. We have no hope. The country is too old.

There aren’t enough young people that were born to replace the Baby Boomers who are going to retire — who aren’t gonna retire, by the way, for as long as they can. This is amazing. This is the first hopeful sign I have seen, ’cause these people are never right. When they start trying to create a picture of doom and gloom, remember why they’re doing it. They’re doing it to aid and abet the Democrat Party, and what this is telling us is that Obama and the Democrats have finally conceded that there isn’t any hope now of an economic revival such that it would help them.

And since there isn’t an economic revival that would help the electoral fortunes of the Democrats, there’s nothing that could help America. Because, remember, all of this economic news is really about how it helps or hurts Obama, not how it helps or hurts the country. So this, I find, actually, a breakout. I’ve never seen a sorry this pessimistic from beginning to end in this entire administration.

Here’s Michael in Raleigh, North Carolina. Hi, Michael. Great to have you on the EIB Network. Hello.

CALLER: Hi, Mr. Limbaugh. How are you?

CALLER: That was a segue into my exasperating question. Two weeks ago, the Democrats and the president are touting “income inequality.” Now, two weeks later, they’re saying, “You don’t need an income.”

RUSH: Yeah, well, what happened in those two weeks?

CALLER: Can you not see these people for who they are?

RUSH: (sigh) You and me are singing the same song.

RUSH: The only thing… I wish I would have printed this. I got an e-mail over the weekend. It was from a friend, an inside baseball memo on what both McCain and Romney were advised by the consultants in both ’08 and ’12 (and I’m sure it’s the whole party, not just the presidential campaigns), and the sum total of it was: “Whatever you do, do not criticize Obama’s policies or what he says. Do not go there! 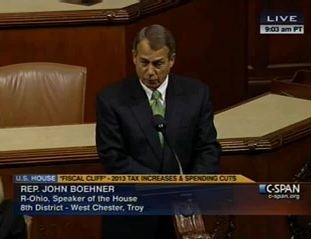 “The American people don’t want to hear it! They like him. He’s the first black president. There’s nothing to be gained. Don’t do it,” and so they’re not. So whoever is running Republican theory or strategy right now is the answer to your question, “Why isn’t Boehner doing X?” Because somebody, somewhere in the upper levels of the Republican strategy machine (such that there is one) has been counseling against it ever since Obama hit the national scene.

CALLER: Oh, this is so sad.

CALLER: Very much so.

RUSH: You are exactly right. I mean, the CBO nuked ’em and has made them look abject fools!

CALLER: And someone’s gotta point that out! I know it’s hard, but point it out on the Sunday shows. “Hey, look, they said this two weeks ago. In fact, we’re the Republican Party. We’re gonna go with income equality because they gave it up.” (laughing) I don’t know what else to do, Rush.

RUSH: Well, don’t give up. I mean, arguably you’ll be able to spread the word more yourself by calling here, and whatever circle of friends you have and you move around in. The Republicans just aren’t gonna do it. It’s just a reality you’re gonna have to come to grips with. They’re not gonna do it, and, if the Democrats nominate Hillary and she gets to be the first woman, or an Hispanic, it’s gonna be the same thing.

CALLER: Oh, sure. Yeah. Yeah, sure. Well, I’m just so tired of this race card and I’m just tired of people being stupid, Rush. That’s all I can say.

RUSH: Oh, gosh, you and me both. I’ll tell you, I’ve had my fill. ‘Cause, you know what? We’re putting our own IQs at risk, subjecting them to all of this idiocy.

RUSH: I mean, normally you want to hang around people as smart or smarter than you.

RUSH: That’s why you listen here, so that you can grow and all that. But when you have to all day talk about idiots…

KRAUTHAMMER: What you have is a president who campaigns on income inequality and has absolutely no answer to what to do about it other than to raise the minimum wage, which is not gonna have any effect on closing the gap, and then his own administration, over half a decade, has absolutely increased the disparity of wealth between the rich and the poor, and here he is campaigning against the results of his own presidency.