My Theory on the Malaysian Airliner

How about this? How about this theory? How about the jet is flying along and you have a total electronic failure but the engines keep working? We’ve been told that the engines, the airplane kept sending data somehow, pinging a satellite even after it was lost from radar. There have been so many confusing reports about whether or not the data that was pinging was coming from the engines or not. I mean, it’s just impossible to keep up with this.

But what happened if — and my guess is as good as any. You’ve got an airplane flying along, you have a total electronics failure, but it continues to be air-worthy, the engines are working. I don’t know if this is possible, given electronic ignition and all that, but let’s say it is. So then the crew says, “We got to get back home. We got to get back to Kuala Lumpur. We can’t fly with no electronics.”

It’s dark, nighttime. They fly over a bunch of unfriendly countries, and they can’t identify themselves, and they’re not identified, there are no lights on. There’s been a total electronic failure. What if some hostile country flew up there and shot it down and then discovered their mistake and nobody wants to admit what happened? Have you heard that theory from anybody? Okay. Is my theory as good as anybody else’s that you’re hearing out there? Yeah. I think my theory holds up, and it works well.

RUSH: Judy in Dayton, Ohio. Great to have you on the EIB Network. Hello.

CALLER: Thank you so much, Rush. I have a theory on the missing plane. It’s gonna be a little different. I think it flew into something akin to the Bermuda Triangle, and it is gone. During World War II, there were fighter planes that flew into the Bermuda Triangle. They were Army planes on a mission; they disappeared. The first search planes going after them disappeared.

RUSH: So what is this, the Bamboo Triangle?

CALLER: Something like that. I’ve heard that there’s a triangle off the coast of China or Vietnam, and it’s like a Devil’s Triangle or some sort, and things disappear. So I don’t know. I don’t know.

RUSH: You know, it’s interesting. The timing of your call is somewhat interesting because it was within the last month — you know, I read voluminously, and I read everything. I don’t care if it’s interesting, I’ll read it. I don’t remember where it was published. But I ran across a story on the Bermuda Triangle, and how that whole legend got started and efforts to establish that there was something to it. It’s unique weather patterns and so forth.

But the story basically pooh-poohed the whole notion that there was something dynamically dangerous about that particular area of the planet that doomed ships and airplanes going through it. They said it’s largely just a series of coincidences, and it’s not nearly as many as people think, that it’s like a lot of legends and mysteries and supernatural things. It’s been expanded and exaggerated and built upon far bigger than what it actually was, in terms of the number of lost aircraft and ships in there.

CALLER: Right. But I understand that aircraft have dials that just go crazy at certain times, and they lose direction. So, you know, I don’t know. It’s a guess, anyone’s guess.

RUSH: So do you think the airplane’s gone? You think it just got swallowed up by the Bamboo Triangle, just gone?

CALLER: I’m guessing that it may have.

RUSH: Well, you know, it’s interesting. (sigh) I wasn’t gonna mention this. Since we’re talking about the Bermuda Triangle, a lot of movies were made about the Bermuda Triangle. I don’t remember the title of this, but you might remember there was a movie made that involved a modern-day pleasure craft, like a Gilligan’s Island-type thing only privately owned, somehow being transported back to near Hawaii during Pearl Harbor. No. It was an aircraft carrier.

Somehow they ended up in a time warp to World War II, and they’re sailing along. They didn’t know this had happened, and they look up, and there’s Japanese zeros attacking ’em, except it was 1980-something when this thing was made. So it could be something like that, Judy. You just never know. I’ll repeat my theory, ’cause I opened the program with it, ’cause, frankly, folks, I know it’s a big mystery. 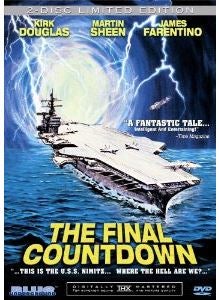 I know that it is very captivating, but at the same time, I’ve had my fill of people who don’t know anything telling us what happened. I’m becoming less and less tolerant of “expert opinion” that is totally ignorant. Nobody knows what happened here. So what I decided to do is, “Okay, let’s apply intelligence guided by experience, use a little logic.” We have a missing airplane. But we after that, we’ve got nothing but conflicting data.

The latest conflicting data is that the engines kept sending data, pinging data, satellite data, for four hours after all other communications ceased. Experts have said, “Wait a minute, that can’t happen,” and the next thing said it can happen. And they said, “No, it can’t!” And they said, “Well, it didn’t in this case,” and others said it did. You had CNN say one thing, Wall Street Journal saying another, AP saying another.

Then we had the change of course. Then we had… I mean, everything. So what I decided to do was take a look at various different teams searching for this airplane, and I decided which of the search parties has the better equipment, the highest level of technology, maybe the most sense. And I decided that this airplane, if it’s missing, is probably where the United States is looking for it, ’cause my assumption is that we have most of the satellites up there.

Most of the satellites that we have are the best, and there’s a lot up there that we don’t know their capability. A lot of them are spy satellites. Probably a lot is known about this airplane that is not being told to us, because to tell us would be reveal how we know, and they can’t do that. So I’m assuming that we’re the smartest guys, we’re the superpower, and that we know something that the other guys don’t. So I’m assuming that where we’re looking is where it is.

Then, okay, how did it get there?

Well, we’re told that the GPS kept sending data long after the other communication systems on the plane stopped. How can that be? Well, I started thinking. I know a little bit about this. So I said, maybe there was a massive circuit breaker — just a giant, catastrophic electrical failure — on the airplane but the engines didn’t go. So the airplane has no electronics. It can’t use a radio, it can’t use its transponders, it can’t ping satellites, it can’t even turn on its lights inside or out.

Therefore, it’s nighttime, and the thing is invisible.

The only thing I haven’t looked at is: Was it cloudy for parts of this route? Was there a moon? I didn’t look. But I know that we’re coming up on a full moon pretty soon, so there had to be some moonlight. But if there were clouds, I don’t know. So if this circumstance is right so far, that they’ve got engine power but they have no other power, can they steer the airplane? Can they turn it around? Obviously they did.

It changed course. So I think, “Okay, maybe it headed back home, which would be Kuala Lumpur. That was the takeoff point. So they’re trying to get back, but where are they up there?” Well, there’s Vietnam, and there’s the ChiComs, and there’s all kinds of hostile little countries over there that are very worried that someone — like the North Koreans or the ChiComs — might attack them, bomb them.

And they look on their radar, and there’s this thing up there. But it’s not answering any radio calls. It doesn’t have any lights. It’s a flying object that can’t identify itself and does not respond to requests. So maybe one of these little countries that’s worried about being attacked launches some fighter jets up there to find out what the hell’s flying over their country, and they get up there and they can’t see it.

They can radar it, but there are no lights on this thing. And even though it looks like a Boeing jetliner, there aren’t any lights on it, and it’s not responding, and it’s being told, “You better get out of our airspace! You better get down,” and it’s not doing that. And maybe they just shot it down. Now, obviously the thing about that theory is, if a giant plane like that gets shot down, somebody would see it.

Somebody would know it. You just don’t shoot an airplane out of the sky and have nobody know it. People on the ground, it has to land somewhere. It has to break up. It has to be a fireball up there if it’s shot down. But my theory’s as good as any other expert’s out there, and it was fun to come up with, at least from the electronics standpoint. Not for the people on board; don’t misunderstand.

The other possibility is — and the latest thing we learned is that this thing, when it changed route, it ended up — there are corridors up there, there are highways in the sky, and when you’re on an IFR flight plan, you’re assigned a highway. Every flight plan is assigned a route. There is a route, New York to London. Involves altitude, way points along the way.

Sometimes you get a great circle route and fly straight, but often there’s a slight zigzag, just the tiniest, and it’s for this kind of purpose, to be able to keep track of an airplane’s progress. The route that they ended up on after changing course would take them as if they were flying to Dubai or Riyadh or someplace in the Middle East. That’s the course they changed to.

So it could have been hijacked and the pilots could have been either ordered under threat of death to fly the route or the pilots would have been incapacitated and the hijackers took over and flew it, Allahu Akbar airlines, who knows. The point is nobody does. Even the Air France jet, I think it was, that exploded because of turbulence leaving Brazil, they found that wreckage in a day and a half in the ocean. They had a general idea of where it was headed. (interruption) Then I’m confusing with something that they did find in a day and a half.

The Soviets shot down KAL 007, remember, ’cause there was a guy who was opposed to the Trilateral Commission on board. Remember that? What was his name? Big Bircher guy, John Birch Society member, was on board KAL 007, and the Russians shot it down not far from the Kamchatka peninsula. It was a Korean airline 747 that was shot down, and the same thing, “We tried to warn it, and they wouldn’t respond,” and this thing supposedly would not change course despite being ordered to by the Soviet MiGs. So they shot it down. It has happened. Has happened.

RUSH: The one thing about this missing Malaysian jet, and we will learn at some point, is that global warming played a role. Well, you sit in there, you pooh-pooh it, and you laugh at it, but when this is all said and done, when whatever it is is known, climate change, global warming will no doubt be inserted as a factor, even if that means that it caused the plane to slip into the space-time continuum.