RUSH: Now, some housecleaning things from Friday. When I walked outta here Friday, I realized even though there’s no better communicator than I am, there’s no better person at painting vivid mental pictures than your host, after spending a number of minutes in detailed explanation of things I do on my iPhone to deal with fast battery loss and so forth, I figured, I’m gonna create some screen shots (One | Two) of what I’m talking about here. I’m gonna send those up to Koko, and I’m gonna have Koko post them, because it’s much easier — I mean, we’re talking about visuals. I’m trying to describe what people see on their iPhone screen. So I took some screen shots of what I’m talking about and Koko posted them. 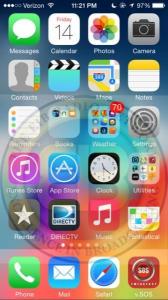 So if you were listening on Friday and you heard my explanation of how I deal with battery churn that’s way too fast, we got the screen shots up there now at RushLimbaugh.com that demo it for you. You can see that I fully charged the phone. You see the battery gauge at 100%. You see 12 minutes later it’s already down to 97%, and I haven’t used the phone, dropped 3% in 12 minutes. I haven’t used it, that’s not right. So what I do, I shut the phone down and restart it, and that produces a battery gauge back at 100%. I let it go 20 minutes, took another screen shot of it staying at 100%, so you can see what I do. I don’t know if it’s gonna work for you, but I do it on every one of my i-devices. 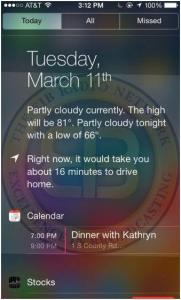 The other thing was the notification center and that’s a little bit more esoteric because I don’t know how many people actually care about this stuff. I do. I’m fascinated by the direction tech is going in its predictive capabilities. I’m fascinated by our devices being able to learn where we go and what we do, and then predict, based on that accumulated, quote, unquote, data, what the phone thinks we’re gonna do and then, say, give us a map for it and traffic conditions and how long it’s gonna take to get there. Apple is working on that to combat Google.

So the notification center where all that stuff is, I am highly interested, and when mine isn’t working right, I want to find out why. I found out why, and I put the explanation for that on RushLimbaugh.com, too. I don’t know why this is, but when you turn off the auto time zone you end up restoring everything to the notification center as it should be. I don’t know why. All I know is that is a deep hook. I spent a lot of time explaining this on Friday and I figured this is gonna be really tough to visualize even for iPhone owners, so I put the screen shots of all this up there. So if you want to go see what I do and what I was talking about, that’s the only reason I’m mentioning this.

Something else we did. I had Koko, because I doubt that it’ll happen, but I wouldn’t be surprised if my screen shots were stolen. There’s nothing to identify them as mine, on purpose. I wouldn’t be surprised if they were stolen and used by some other blog as though they have discovered it. So I had Koko watermark all the screen shots. You’ll see a pretty big EIB logo watermarked, in case you’re asking, “Gee, how do I get that, Rush, how do I get that wallpaper?” It isn’t wallpaper. It’s a watermark.