Jim Kallstrom’s Take on the Plane

RUSH: Let me go back to the phones to Grass Valley, California. Hi, Michael. Great to have you. Thank you for waiting. Hello.

CALLER: What an honor, Rush.

CALLER: Listening to you since the very beginning.

CALLER: And, you know, I feel guilty because my question is more boring airplane stuff. But —

RUSH: There’s no — wait a second. There’s never anything boring on this program.

RUSH: All right? So don’t worry about that. That’s my gig. We — nothing is ever boring here.

CALLER: Okay. So, I wonder, you know, we have General — what is his name? — McInerney on CNN saying that the plane is in Pakistan on the ground. And we’re still looking down in — you know, around Australia for the pieces, and I just wonder if that part could be just a complete ruse, a cover-up, somehow by the administration. Because this happened on their watch, and they don’t want to look bad, and I wonder if we will ever know what happened to that airplane.

RUSH: We may not. I — I’ll tell you, one — we’re either gonna find out what happened and it’s gonna be a simple explanation that nobody’s gonna believe or we’re never gonna really know.

RUSH: Now, as to whether or not people know it’s terrorism and they’re not announcing that because they want to avoid worldwide panic, no way of knowing that, either. I don’t know that this would be the Obama administration’s purview. This is a Malaysian airliner. It’s their — it’s their story, it’s their case. It’s their issue. I’ll tell you, we’ve got — I just saw a chart of all of the aircraft and all of the ships and all of the helicopters. The search mechanism for this thing is military size and scope — clearly more than it would take to protect Crimea. We’re devoting more military assets to finding this jet than we are to any military operation, outside of Afghanistan. But since you bring this up, let’s head to the sound bites because yesterday I mentioned Jim Kallstrom, who led the investigation on TWA 800. 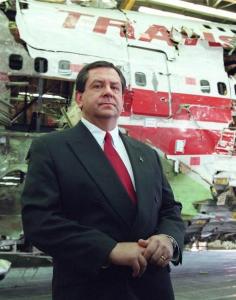 He was the head of the New York office of the FBI. He is one of the founders the Marine Corps-Law Enforcement Foundation. I’ve known Jim Kallstrom since the early nineties, and I don’t know of anybody with more honesty or integrity. And he took a hit with the initial explanation of TWA 800. Eventually it was an empty fuel tank that sparked and exploded and brought the airplane. And nobody believed it. Thought it was a missile that shot it down. And Kallstrom is just I remember during that investigation, he was just wearing himself out dealing with everything and doing the investigation, leading it, the NTSB, all the other elements involved. And it took years of his life. Now he’s retired, private security, other things, and running the Marine Corps-Law Enforcement Foundation, and he still makes himself available as an expert guest, and he showed up on Megyn Kelly’s show on Fox last night. She said, “Jim, do you believe, if this airplane had crashed into the ocean, as opposed to landed someplace, that we would be seeing” — I’m sorry, go ahead, play seven first, I’ll go back and get six. “Do you think we would be seeing debris by now if it had crashed in the ocean?”

KALLSTROM: Well, if there was a catastrophic event, the plane blows up at altitude, either by a bomb or some mechanical, electrical failure, you would see hundreds and thousands of pieces of the airplane on the ocean. Within a week of TWA flight 800 the debris was landing on the beaches of Cape May and Nantucket island. So even if they figure out, you know, where that spot was, you know, they’re gonna have to do some real calculations on the drift, on the tides, and if it’s suicide by airline, there’s not gonna be that much debris, you know, it didn’t blow up in midair.

RUSH: The previous question she said, “Your thoughts over all, knowing what we know tonight on what happened to the airplane.”

KALLSTROM: It’s a very confusing environment we have there. I think after all this time that they haven’t found any debris. I mean, you really have three things. The pilots wanted to kill themselves, you know, suicide by airplane. They had ample opportunity to do that. They want to cause a major stir, they want to blow up something, they had ample opportunity to do that. Or they want to take the plane for other reasons, and I would guess — that’s my leading thought on the issue right now. I don’t see where the mechanical failure adds up because, you know, if they had mechanical failure and they were trying to May Day or anything, they did none of that.

RUSH: So he thinks that they took the plane someplace. His third option, they want to take the plane for other reasons. So hijacking. It is somewhere, or it didn’t make it where it was going, but it was not a bomb. He’s siding with the idea that it wasn’t pilot suicide, it wasn’t a bomb, there’s no evidence of that. The fact that there isn’t any evidence the airplane means it is somewhere that we haven’t found, so then jumping forward, Megyn Kelly said, well, you heard Lieutenant General McInerney earlier say he believes it’s in Pakistan and he believes that there is a source at Boeing who believes that although Boeing is denying that. Do you think that this airplane could be in Pakistan?

KALLSTROM: You know, that could all be true, but you’re not gonna get the US government to talk about it. If they did talk about it and they worked for me I’d fire ’em. I mean, if we know where the plane is, a good chance we could, I don’t know that, Megyn, I have no inside information. But if they had located the plane, they’re not gonna be out blabbing about it. They’re gonna put some operation together, you know, if the people are still alive or whatever, to get that plane out of the arsenal of a future terrorists’ operation. I would not be surprised if at some point we find this plane somewhere.

RUSH: And there you have it. So Kallstrom, who’s as close to anybody you’re gonna find with investigative experience in an incident like this, although it’s not the same thing because TWA 800 actually exploded and there was debris and people saw it fall out of the sky. Here, there’s no evidence of anything. There isn’t ontological certitude over the fact it took off and it radioed its final the goodnight message and then had a course correction, and beyond that nobody knows anything. So it’s left to reasonable, responsible people to speculate, and in Kallstrom’s case, you know, McInerney, the general, says, yeah, I got somebody in Boeing who knows this thing’s in Pakistan.

Kallstrom said, if it is, you’re not gonna get anybody in our government confirming that. They’re not gonna confirm anything, they don’t want bad guys to know what we know, and they’re gonna be mounting missions to deal with it, do something about it, find out what the status of the passengers is. But if you strip it all away, and you try to apply logic to it, if there is no evidence anywhere of the thing having blown up, then it has to be somewhere. You know, everybody has to be somewhere. I happen to be behind the Golden EIB Microphone today. You happen to be where you are. That airplane is somewhere. It is not in a black hole. And it is not in the Twilight Zone. And it is not being used in the pilot episode for Lost, version two.