Obama Did “What Rush Limbaugh Said He WouldnÂ’t” — or What I Forced Him to Do?

RUSH: Ladies and gentlemen, an AP story. I want to read you just a brief excerpt, because here’s the headline: “Obama to Do What Rush Limbaugh Said He Wouldn’t in Response to Russian Aggression.” The AP is thrilled. They’re ecstatic. “Conservative radio host Rush Limbaugh last week said President Barack Obama should push for harsher punishments for Russia over its aggression in Ukraine.

“He argued Obama and his allies should kick Russia out of the G8 and International Monetary Fund, but predicted the president wouldn’t push for such action. On Monday, the Washington Post reported Obama plans to urge world leaders to indefinitely suspend Russia from the G8,” and then this sentence: “It’s unlikely the White House is taking foreign policy advice from the ‘king of talk radio,’ but it appears that Limbaugh may have spoken too soon.”

So I guess I’m not an “entertainer” in this report.

Obama, he can’t… Oh, no way! No way would Obama be following advice I had given. No. What’s going on here is that I “spoke too soon.” I went out on a limb, and Obama cut the limb right out from under me. What it was is a safe bet. Safe bet! He ended up doing something that I, frankly, am surprised he did. It’s a suspension, by the way. It’s not a removal. This is the thing, and AP needs to update this, because they have not been kicked out of the G8. They have been “suspended,” and it’s a big difference.

RUSH: Here are a couple of Obama sound bites. He’s at the Hague in the Netherlands. He was doing a joint press conference with the Netherlands Prime Minister Mark Rutte. No selfies taken. Rutte is a guy. During the Q&A, an unidentified reporter said, “Is this a done deal? Is there any doubt in your mind that Putin will return Crimea to where it belongs, according to the West, or is this diplomatic show of force basically just to prevent another land grab somewhere else by Putin?”

OBAMA: It’s not a done deal in the sense that the international community by and large is not recognizing the annexation of Crimea. You know, obviously the facts are — on the ground are that the Russian military controls Crimea.

OBAMA: But, you know, I think it would be dishonest to suggest that there’s a simple solution to resolving what has already taken place in Crimea. Russia is still making a series of calculations.

OBAMA: And, again, those calculations will be impacted in part by how unified the United States and Europe are, and the international community is, in saying to Russia that this is not how in the twenty-first century we resolve disputes.

RUSH: There wasn’t a dispute! Well, there is now, but here it is again, this twenty-first century, “This is not how we do things.” Well, he did it! There wasn’t a dispute. Putin wanted Ukraine and Crimea. So he made a move on ’em. There wasn’t any dispute. There wasn’t any negotiation. So Putin goes and does it, and we’re still stuck in the, “Hey, this is the twenty-first century. You can’t do it that way,” after he did it. So then we’re saying, “Okay, you know what? Well, we’re gonna suspend you from the G8, Vlad. We’re just gonna suspend you. You can’t come anymore. We’re not gonna let you in when we get together with the G8 anymore, Vlad.”

So what Obama said here is that he was not going to recognize what Putin did, but that he admits that Putin did it. And he’s not gonna reverse it, unless Putin decides to jump into the twenty-first century. Meanwhile, he’s gonna try to stay in solidarity and unification with the Europeans in what they say about what Putin did, and if the Europeans will go along with suspending Putin from the G8. This is the full mention of G8 suspension from the Washington Post: “Ousted by G8, Russia determined to prove it can thrive without the West.

You know why Putin thinks he can thrive without the West? It’s all about natural gas, folks, and it’s all about economics. Here’s what has been happening. Here’s what is happening. All of these silly Western European socialist Democracies have just bought in to this entire insane belief that economic progress is resulting in the destruction of the planet and the climate. That is what they believe. Economic progress, fueled by the engine of freedom, and the fuel for that engine is oil. There isn’t a substitute for it. Oil and natural gas, there are no substitutes for it anywhere. Solar, wind, not even close.

So here you have these pointy-headed intellectual theoreticians, these little socialists who think they’re smarter than everybody else in the UK and in France and wherever else you go in the European Union, they have decided that they’re going to be good people, and to show the world that they’re good people, that they’re good stewards. So they have gotten rid of as much of their fossil fuel energy production, and they have replaced it with the weather. Yes, ladies and gentlemen, the European nations are fueling their economies with energy provided by the weather. 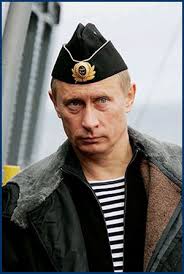 That is how you have to look at wind and solar.

Well, what happens if the sun’s behind a cloud? Hell, what happens if the sun is shining brightly? It just isn’t there yet. Ditto with wind. But Putin didn’t do any of that. Putin is now in charge of all the natural gas lines that go through Ukraine, that service the silly socialist European democracies who don’t have to spend any money defending themselves because we do that via NATO.

So they’re free to experiment with all of this totally insane liberal, feel-good gobbledygook. And they are now very dependent on Vladimir Putin for the natural gas that’s going to heat their homes and power their various utility needs. So Putin is saying: I don’t care, I don’t need your G8. I’ll be happy to have you guys be the G7, and I’ll be the G1 asterisk. I don’t care. ‘Cause you guys got nothing without me.

He now owns the pipelines! But we’re gonna suspend him from the G8, for a while. Vladimir Putin supplies more than 40% of the natural gas to Europe, so he has much more leverage over these silly western European Union socialist democracies than they have on him by threatening to suspend Russia from the G8. He’ll just stick in the nineteenth century and run rings around these smarter than everybody else in the room pointy-heads that think they are the future in the twenty-first century.

RUSH: Okay. Okay. Okay. So it wasn’t the AP! Okay, I’ll fix it! Jeez. Man, oh, man. I am not allowed even the slightest error. “Hey, you said, you said.” Most people are allowed to learn from their mistakes and grow. When I make one, it’s like there goes everything I’ve ever worked for.

Greetings, welcome back, great to have you, El Rushbo, the EIB Network.

It turns out it was not the AP for chiding me for saying Obama wouldn’t do what he did; it was the TheBlaze.com. Okay, so big whoop. There, I fixed it. It’s written here kind of crazy. It says TheBlaze.com update via the AP, then I come down and read this thing, says, “Conservative radio host Rush Limbaugh last week said –” It turns out The Blaze wrote this, not the AP. (interruption) What? All right. Fine. All right.

“Conservative radio host Rush Limbaugh last week said President Barack Obama should push for harsher punishments for Russia over its aggression in Ukraine. He argued Obama and his allies should kick Russia out of the G8 and International Monetary Fund, but predicted the president wouldnÂ’t push for such action. On Monday, the Washington Post reported Obama plans to urge world leaders to indefinitely suspend Russia from the G8.” This is what The Blaze wrote. “ItÂ’s unlikely the White House is taking foreign policy advice from the ‘king of talk radio,’ but it appears that Limbaugh may have spoken too soon.” That’s why I thought it was the AP writing this and not The Blaze.

Well, let me just tell you something. As far as Obama doing something that I said he would never do, some people might say that that’s one of the benefits of living rent-free inside his head. How about the possibility I use reverse psychology that gets him to do what I want done? I mean, I would never suggest such a thing. I’m just putting out the idea. Suppose I’m using reverse psychology, “You know what we ought to do? We ought to suspend Russia, kick ’em out of G8, but Obama will never do it.” Obama hears that, “Oh, yeah? Watch me.”