RUSH: After the president met with Pope Francis, Il Papa, he then went over to the Villa Madama, the headquarters of the Italian prime minister, Matteo Renzi. They had a joint press conference that was interrupted. The cable nets actually cut away from this for news about Governor Christie. I kid you not. Here is what we got of Obama’s joint presser (not all of it, but some of it) with the Italian prime minister, Matteo Renzi.

OBAMA: My day started with the great honor of meeting His Holiness, Pope Francis. I’ve been incredibly moved by his compassion, his message of inclusion. Uh, I was grateful to have, uh, the opportunity to speak with him about the responsibilities that we all share to care for “the least of these,” uh, the poor, uh, the excluded. Uh, and —

RUSH: Who the hell is excluded?

OBAMA: I was, uh, extremely moved by his insights about, uh, the importance, uh, of us all having, uh, a moral perspective on world problems and not simply thinking in terms of our own narrow self-interests.

Anyway, they cut away from this to go to the office of the firm of Gibson, Dunn & Crutcher. Attorney Randy Mastro, the lawyer hired by Governor Christie to review Bridgegate, held a press conference to discuss their findings.

MASTRO: — that anyone in the governor’s office besides Bridget Kelly — 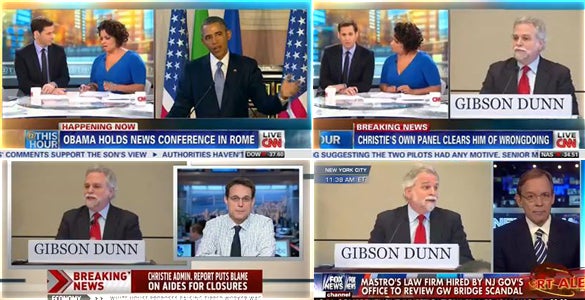 MASTRO: — knew of this idea in advance —

MASTRO: — or played any role in the decision or the implementation of it.

RUSH: Okay. So the firm that Governor Christie hired to investigate himself has cleared him of any wrongdoing. Great news for the Democrats. But they cut away from the Obama presser for it. Yes, you heard me right. You heard me right. (chuckling) Yes!