RUSH: According to media reports, President Obama met with Pope Francis for 52 minutes in the Vatican. Obama didn’t intend to show up there. He looked at the word quickly and thought it said “vacation.” And when they were pulling up to St. Peter’s, Obama said (impersonating Obama), “What — what — what — what are we doing here?”

“Sir, you said you wanted to come to the Vatican.”

So once they were there, they were committed. Giant entourage shows up at the Vatican. So Obama went in there, and he met with Pope Francis for 52 minutes. We’re told that it was supposed to show how the two men are aligned on subjects like income inequality. Meanwhile, here’s Obama, he spends 52 minutes — look at me — 52 minutes with Il Papa. It makes news all over the world. He spends 20 years in Reverend Wright’s church and you can’t find a story on it. You like that one, huh? They like that one the other side of the glass. I can always tell when I have scored.

Pardon the sniffles. I’m gonna sniffle as little as possible. It’s gonna irritate you. I know it irritates me when I hear people sniffle. There’s nothing I can do about it, folks. I can’t hit the cough button every time or there wouldn’t be a program. So I apologize in advance for that. I know it’s not polite. I know it’s not professional. I know it’s uncouth. But what am I gonna do? (coughing) Excuse me. (coughing) Yeah, anyway. Where was I? Oh, yes. What is so funny? They’re laughing at my discomfort, a little bit of a disability here today. Not at a hundred percent. But still gaming it.

Anyway, we’re supposed to believe that Obama had nothing in common with Reverend Wright. In fact, Obama didn’t even hear a word Reverend Wright said in those 20 years. He didn’t hear all that radical stuff, not familiar with any of that. Now, The Politico says, ladies and gentlemen, that Obama met with the pope. Really, you talk about a reversal of fortunes and you talk about a 180, The Politico says that Obama met with Il Papa because Il Papa is now the biggest superstar on the international stage, and Obama wanted to benefit from his popularity and from his cool factor. 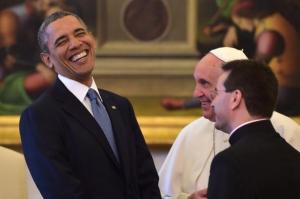 Putin is not Mr. Cool. In certain places, yes. But Il Papa, the pope, when he came out there for “income inequality,” that’s why Obama is there. Obama is trying… I mean, it’s a reversal. It’s a true reversal of fortunes. The pope’s out there sounding like Obama a lot, and Obama says (impression), “You know what? I like the way that sounds. I’m gonna try to get in on that.”

So he goes over there. He’s trying to soak up this income inequality thing that the pope stands for, and the pope’s cool factor. The pope’s at 85% approval and Obama’s almost the same number disapproval. His disapproval number is almost 60% now. The disapproval has never been this high. I mean, it’s Panic City inside the Regime. No matter what the Drive-Bys tell you, it is.

But I’m not kidding. This is how the media talked about both the papacy and the presidency: “The cool factor.” Just to show you how watered down great institutions have become in our modern pop culture, Obama had to go visit the Vicar of Christ to try to get some of the excess “cool factor” that the pope has. In fact, the original Politico headline for their article was: “Obama Wants Halo Effect.” 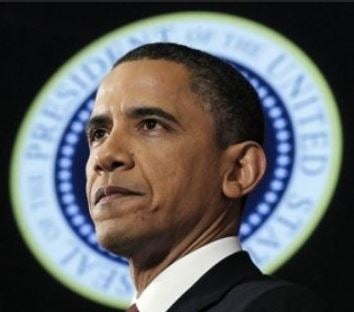 Now, you would think that Obama would be surprised to learn that he has lost “the halo effect.” I mean, every picture of him they still try to put a halo on him. But you have to wonder — and I do. This is what I do. You have to wonder if Il Papa, Pope Francis, likes being used by Obama as a photo-op prop for his cool factor. ‘Cause don’t think the pope knows this. One thing I can’t find out:

Was this scheduled, was this on the itinerary, or did Obama decide to make a detour on his way out of Belgium to Rome? I haven’t read enough to know. But you do have to wonder. I mean, the pope knows. The pope is a big guy. He doesn’t care. I mean, for the goodness of the world, if whatever he is can rub off on Obama, then fine. He will do it. But, you know, Obama has used Beyonce, he’s used Jay-Z, and now the pope.

Can you understand, folks…? Try to think of it this way. Can you understand the humiliation of Barack Obama having to meet with the leader of the Catholic Church in order to recapture some cred? Man! If you would have told anybody back in 2008 that 2014 would be so bad for Obama he’d have to trot off to the Vatican to meet with the pope in order to restore his image, can you imagine what they’d have said?

I mean, to these people, the Catholic Church is enemy number one. Stop and think of that, too. Obama’s big donors are wealthy leftist gay activists who do not like this pope, and they do not like the Catholic Church, and there is Obama trying to soak some of it up. They’ll let it slide, but, I mean, this is just not something that anybody would have forecast.

But I can’t help but think back to the truly historic way that President Reagan and Pope John Paul II worked together to bring down the Soviet Union. When Reagan met with the pope, it was about world affairs and improving the lot in life for millions of citizens. When Obama meets with the pope, as always, it’s about Obama. It’s about reviving and restoring Obama.

When Reagan met with the pope, it was about liberating millions of people from the bonds of communism. But Obama, according to the Drive-By Media, is simply seeking a boost in his “cool factor.” The difference is stunning to me.