RUSH: Now, you remember — you may not remember it, ladies and gentlemen. On March 21st, ten days ago, we had a caller on this program, Siobhan was her name. She was from Columbia, Mississippi, and she was African-American. She said that she was ashamed of Obama. Well, guess what? In Houston, on the TV station KRIV, they played a replay of what happened on the radio. They found the local leader of the Black Panthers, the New Black Panthers, to comment on this woman calling this program and me. The woman’s call was a long call and what we’ve done here, we have basically put this together as a montage of her points, ten days ago on this program.

CALLER ARCHIVE: I have one major problem, and that’s Barack Obama himself. My problem is, as a black woman, I am embarrassed to be a black-American. My grandmother is 94 years old, and I imagine that her and all of our ancestors that died and fought for what we’re supposed to call freedom, this is not what they imagined as the first black president. …

I don’t care whether you’re black, white, purple, green, blue. I don’t care. This man can’t even spell “respect.” … [A]s a country overall, when you look at where we were and how far we’ve come, and you get somebody in this position of power that is of African-American descent, you don’t expect Obama. This is not what you expect.

You expect somebody who can actually use their brain without somebody else telling them what to say, that knows how to articulate … [H]e’s done more harm than good, and the biggest problem that I have is that when he ran for the first time, nobody voted on him based on character, and that’s one problem I have with politics in general.

People vote based on what they see. Everybody saw “a black man” that could be president. “Woo hoo! That’s gung-ho! Let’s get behind this man.” But nobody bothered to vote on the character of this man. Nobody bothered honestly look into what this man represents. What is he tried to go trying to do? How he is going to be advance this country? This is supposed to be America land of the free, but, you know, “Hey, if you say anything that goes against what she saying, you’re racist.”

RUSH: Now, you hear that woman. There was not one, “y’know;” there was not one, “uh, and, uh.” Now, it’s edited because her call went on for a long time. That is a montage of her points. She’s clearly intelligent, extremely well spoken. When you have a caller like that (you didn’t hear me in there), you just get out of the way. She was making one point after another, and this caught the attention of the New Black Panther Party in Houston, and it ticked ’em off.

So the New Black Panther Party in Houston ended up on the morning show at our Houston affiliate, and was talking to the host Matt Patrick. The Black Panther leader is Quanell X. Not to be confused with Jambo Jambone X, who has the called this program before, who has appeared here. This is Quanell X. This so lit up Houston that the TV station replayed the audio of what happened on the radio in Houston.

So here it is, the first of two sound bites with the New Black Panther Party leader, Quanell X (not Jambo Jambone X) upset at this caller Siobhan from Columbia, Mississippi.

X: Rush Limbaugh posted on his website a conversation he had with an African-American female who said she was ashamed for being black because of our sitting president, President Barack Obama. She says because his leadership is so bad, as a black person, she’s ashamed of being black. And Mr. Limbaugh highlighted her statements, put it on his website to say to black people: See? There’s one of you all saying she’s ashamed of being black.

I want to say to that poor sister, a mind is a terrible thing to waste. God made you black before Barack Obama ever existed. So if you hate yourself for being black, it ain’t got a damn thing to do with Barack Obama. You have a black inferiority complex and you have bought into the mind-set of white supremacy. So let’s pray for that sister, but say to Rush Limbaugh, “None of us are falling for that game.”

RUSH: All I did was answer the phone. All I did was answer the phone. And we “highlight” a lot of calls on RushLimbaugh.com. But this was noteworthy. We get one of these calls once a month, anyway, but this was perhaps one of the most direct and poignant. So then the radio show morning host Mike Patrick responded to Quanell X of the Houston New Black Panther Party (not to be confused with Jambo Jambone X).

PATRICK: Whether a person’s black or blue or brown doesn’t make any difference. He puts it on his website.

X: No, he highlighted that conversation!

X: He highlighted it!

RUSH: Ooh! Ooh. So the local host is piling on the Houston New Black Panther leader Quanell X, who then dutifully replied…

X: I don’t see many of us look at him as an embarrassment. Many of us wish he would do a little bit more directly toward us as he’s done for other groups such as the homosexual community, the Hispanic community with the DREAM Act, etcetera. He stepped out on a limb for them, but we want him to step out on a limb for us also as he’s done for others. But I’m not ashamed of our president because he’s made some things that we feel are not in the best interests of everybody, including ourselves. But his policies that he’s made, we should let him stand on it. But I’m not ashamed of our president, as she shouldn’t be, either.

RUSH: (sigh) Well, I… (interruption) What did…? (interruption) No, I don’t think he thinks Obama’s doing a good job. Snerdley just said, “What does that mean? What does this mean?” Well, I thought he said, “He stepped out on a limb for them, but we want him to step out on a limb for us also as he’s done for others. But I’m not ashamed of our president because he’s made some things that we feel are not in the best interests of everybody, including ourselves.”

Anyway, the other side to this, by the way… There’s something else that happened out there along these lines. I’ve got sound bites of this or maybe it’s a news story. I forget which. I’m doing everything I can to stay focused here, folks. I told you, when I get one of these colds (I’m suffering the ravages of the common cold virus) I turn into a baby. It’s just terrible. I proudly admit it. It’s the most… It’s worse than the flu. 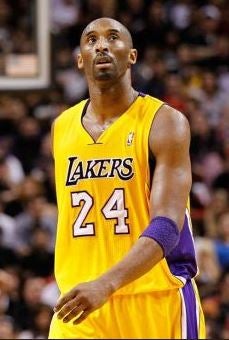 I had 103-degree fever three weeks ago and didn’t even know it. It didn’t even matter. I’m not running any fever. This is just (sniffles). I hate it. Anyway, I gotta take a quick time-out. You sit tight. (interruption) No, I’ll tell you what it is. It was Kobe Bryant. I just remembered now. The brain synapses are firing. Kobe Bryant said (summarized), “I’m not gonna support Trayvon Martin just ’cause he’s black.” Yeah, that’s what he said.

Kobe Bryant went out and said that, because there was this solidarity movement. There was mad desire on the part of every black person to support Trayvon Martin, and Kobe Bryant (and I forget where he said it), said that he wasn’t gonna do that just ’cause the guy’s black. It doesn’t make any sense. Here it is. It’s a Mediaite story.

RUSH: It’s a Mediaite story. “Kobe Bryant said in a recent interview that he wasn’t comfortable with several Miami Heat players protesting in support of Trayvon Martin, saying he doesn’t like the idea of reacting to an issue like that just because he’s African-American, and instead believes people just need to relax and listen to the facts instead of just blindly getting behind a cause.

“On Arsenio Hall’s show last night, ESPN radio host and TV commentator Stephen A. Smith said that Bryant was ‘right on point’ in his assessment. Smith said it’s fairly evident black people are ‘outnumbered’ in American society, but that doesn’t mean the African-American community has a ‘license to be unfair’; people need to ‘exercise a level of fairness and justice.'”

I don’t know what prompted Kobe Bryant to say what he said. It was in an interview with somebody. I just haven’t a chance to click on the link. But he was upset that the Miami Heat en masse, apparently, were supporting Trayvon just ’cause of racial things. And Kobe said: That’s not enough for me. It’s two sides of the same coin, with Quanell X the other side of it.

“I wonÂ’t react to something just because IÂ’m supposed to, because IÂ’m an African-American. That argument doesn’t make no sense to me. So we want to advance as a society and a culture, but, say, if something happens to an African-American we immediately come to his defense? Yet you want to talk about how far weÂ’ve progressed as a society? Well, weÂ’ve progressed as a society, then donÂ’t jump to somebodyÂ’s defense just because theyÂ’re African-American. You sit and you listen to the facts just like you would in any other situation, right? So I wonÂ’t assert myself.”

He was ripping on the Heat for en masse defending Trayvon simply for the solidarity aspect, solidarity of the race. And Stephen A. Smith came on and agreed with him.