RUSH: Now, let’s delve into the Fort Hood shooting. We also want sound bite 22 at the end of this, Mike. I just got that one. We’re gonna start here with General John McHugh. This morning in Washington on Capitol Hill during a Senate Armed Services Committee hearing on the 2015 Army budget request, the Army General John McHugh testified and had this to say, his opening remarks, about the Fort Hood shooter, Specialist Ivan Lopez.

MCHUGH: He was undergoing a variety of treatment and diagnoses for mental health conditions ranging from depression to anxiety to some sleep disturbance. He was prescribed a number of drugs to address those, including Ambien.

RUSH: Sounds like a Kennedy, in a way. I mean, what was it, Patrick Kennedy, Ambien, driving down the median late at night after a session of Congress. You know what I find one of the most ironic things is that on an Army base, Army, folks, they don’t allow people to run around armed. Army base! I mean, there you have the life lesson. It happened again. The original Fort Hood shooter, jihad, although not stated, but it was. Allahu Akbar, you had jihad going on. Nobody was able to stop the original shooter ’til somebody showed up that was armed. One of the reasons it happened in the first place, the shooter knew that nobody else was armed. It’s classic. The assumption being if you put guns in the place, they’re all gonna be fired, because everybody’s a rotgut when you give ’em a gun.

Here’s another example. The only guy with a gun was the bad guy, on an Army base. Well, I mean, it’s a clear illustration of how political correctness on the left totally distort common sense and reality everywhere in our culture. Here’s Carol Costello. You should have seen the coverage on CNN this morning. They’re just beside themselves. How can this happen? There weren’t any guns. What can we do about it? It’s horrible, it’s horrible, every shooting we talk about mental illness and they don’t pass any laws. Well, we used to have plenty, Carol, we used to have plenty of laws on mental illness, but they were deemed discriminatory against the mentally ill, so we had to get rid of ’em. 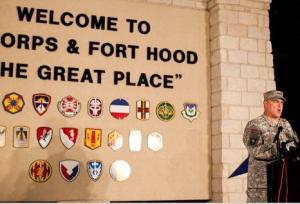 That’s why there are homeless people dumpster diving and living under shopping carts and so forth, because we’ve deinstitutionalized them in the name of their freedom and privacy. I think this country has a collective mental illness when it comes to looking to government for answers to everything. You want to talk about insanity, the definition of insanity, doing the same thing over and over again expecting a different result. The genuine mental illness that we have is this seemingly nationwide belief that government is the solution to every problem, even the ones that government costs.

COSTELLO: We always talk about dealing with the issue of mental illness in this country and nothing happens. There have been so many instances of a mentally ill person who somehow got a hold of a gun and then participated in a mass shooting, and no law changes, nothing happens, nothing changes.

RUSH: What’s supposed to change? The government’s in charge, Carol. This is not supposed to happen at all because the government’s making the laws. Or not, as the case may be. We keep looking for the wrong people to fix things like this. Whoever is in charge of this rule that nobody on an Army base can bear arms, sorry, that just defies common sense. It’s just absolutely silly. It’s totally reactionary and it’s rooted in the belief that if take guns away from everybody that you’ll get rid of gun violence. And here’s the second, the third, the fifth, the 15th, the 20,000th incident where we disprove that.

Take guns away from everybody and we’re not supposed to have any gun incidents, are we? And yet people who intend to get guns and do harm with them always seem to find a way, whether there’s a law against it or not. Mental health laws, we’re supposed to have laws that would stop this insane guy from doing this, or this disturbed guy from doing this. If he’s disturbed he doesn’t even know what the law is and he doesn’t care what the law is. The law doesn’t stop anything from happening. The law doesn’t prevent murder. The law doesn’t prevent bank robbing. The law doesn’t stop anything. It’s a moral marker. It’s a social marker. It’s a mechanism for meting out punishment, and in some cases it’s a deterrent, but not very often. 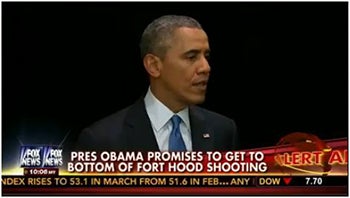 Last night, Anderson Cooper 195, fill-in host John Berman speaking with a White House correspondent from CNN, Michelle Kosinski, about the latest shooting. John Berman said, “Michelle, give us some details how the president learned and the response.”

KOSINSKI: I think many of us remember seeing those pictures of the president and Mrs. Obama at the memorial service for those 13 shot in 2009. He delivered the eulogy for that. Some describe that as one of his strongest speeches. So he, too, obviously was affected, calling this heartbreaking.

RUSH: Are you kidding me? This is about Obama? Of all the things that happened with the Fort Hood shooter in 2009 we’re supposed to remember Obama’s speech? Nobody remembers that. Did any of you? When you heard about another shooting at Fort Hood what was the first thing that came to your mind? I guarantee you the first thing that came to your mind: “Uh-oh, was it terrorism? Is it another terrorist? Was it more jihad?” You didn’t think, “Oh, my God, Obama, what’s he doing? Oh, my God, I remember Obama’s wonderful speech, oh, my God, what is Obama gonna do?” That isn’t what you were thinking. You were thinking, “Another terrorist incident at Fort Hood?” CNN thinks you were thinking about Obama, what a wonderful speech.

Here’s Jay Carney. I have time to squeeze this in. This afternoon the press secretary in a daily briefing. Question: “Do you have any updates on Fort Hood, Jay, has the president been briefed this morning? Is there any new information? What’s Obama think? What’s Obama doing? How does it affect Obama?”

CARNEY: Last night the president convened a conference call with Department of Defense and FBI leadership while aboard Air Force One. He received another update this morning during the presidential daily briefly.

CARNEY: The president will continue to receive updates as new —

CARNEY: — and has directed that his team do everything it can to assist the families of the lost and wounded.

RUSH: The president, he’s been told, is getting updates. He’s getting on the airplane, going to a fundraiser, in fact, I think, with rich Democrats that nobody seems worried are involved in politics.

CALLER: I wanted to mention, I can directly correlate my comment with Ian’s statements earlier, which will bring up both subjects. I was gonna talk about the unarmed soldiers that are on the United States bases. I can tell exactly when the wimpification of the United States Army started. I believe it was in the late eighties. I was in the United States Army from ’80 to ’84, and my brother was in earlier. My brother is actually two years younger than me. He’s a World War II veteran, and the reason why is he saw action on the Berlin Wall while it was still under World War II occupancy.

CALLER: But during his time in the military, there were some mishaps that happened. So he was ordered… Along with everybody else once he became an M60 machine gunner down in a Jeep down below next to the wall, he was told that he was not allowed to keep any bullets in the gun no matter what they do. If they throw bottles on ’em, if they spit on ’em, nothing.

RUSH: That’s when you think the wussification began?

CALLER: I think it sneaked in right there because exactly what happened was they told them they weren’t allowed to load their weapons unless there was “a direct threat.” And by then, I’m pretty sure you’re dead.