RUSH: I tell you, my good buddy Ted Bell’s new book is out. His character’s named Hawke. Ted writes some of the best espionage spy thrillers. Vince Flynn was my all-time favorite in that category. But I’ll tell you, Ted’s latest book is just great. I can’t put it down. It’s called Warriors, and it’s just impossible to put down. If you haven’t read any, it’s Ted Bell. If you haven’t read any of these series, just go to Amazon or iBooks or wherever you get books. 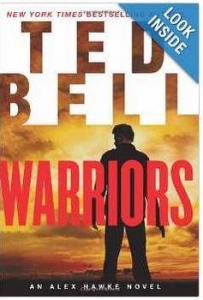 If you do e-books especially, it’s just easy there. They’re just awesome. If you like espionage spy thrillers with current events as the plot lines, there are still a lot of guys writing spy thrillers about post-9/11 stuff, Afghanistan and then Al-Qaeda and all of that. But Ted brings in modern-day characters. It’s not all about just Al-Qaeda-sponsored state terrorism. It’s really expansive, great, great reading stuff, and I just get so excited. And his books are not small. It takes a while to craft these things.

The latest one, it’s out in hardcover now.

You know, our second book in the Rush Revere series, Rush Revere and the First Patriots, comes on the heels of our first’s success. We got two books on the New York Times children’s top 10 list. It’s just something I never thought would happen. The response we get from everybody, adults and kids, is positive. I had a conversation with a friend of mine on the golf course last week.

I was floored. He got the book for his grandkids and so forth, and I signed a couple of copies. I had no idea he was gonna read them. I’m finding a lot of adults read these books and are learning things they didn’t know — which, to me, is constructive. I mean, we’re talking people anywhere from in their forties to 70 who are reading my little history books who are reading things first about the Pilgrims, now to the Boston Tea Party.

There are people in it that they didn’t know, because even they weren’t taught. And then, you know, doing the research and the history to come up with this has been fun and rewarding. But the whole thing… I just don’t know how to thank you, and people keep buying these books. And it’s not just that. Afterwards, they send us all these e-mails to tell us how much they love them. You’ve heard the calls here from even young readers.

So just want to take the time here to talk about this, ’cause I haven’t mentioned my book in a while, in deference to the Stick-to-the-Issues Crowd. So I just wanted to bring it up again to thank you all and to let you know that it’s just great. It’s been out March the 11th so we’re coming up on a month for the second book. Two of them are on the top 10 at the same time.

And Ted’s book, Ted Bell’s Warriors, is out now. That is great. If you like spy, espionage, mystery-thriller stuff, you cannot get a better book.