RUSH: Let me grab Susan here, in Flemington, Delaware, as we start on the phones. Great that you called. Welcome.

CALLER: Hey, Rush. I just wanted to comment about the New York Times article that came out today, that you can put your doctor’s name in and see how much he makes per procedure. My husband’s an orthopedic surgeon. I work in his office.

RUSH: Now, wait a minute. Wait a minute. You just stole some my thunder. That was gonna be the next phase in the show, but go ahead. That’s my next story. She’s right.

RUSH: The New York Times has a place you can plug in your doctor and find out how he’s ripping you off or how much money he makes per procedure. I’m telling you, we called it that this was the next step.

RUSH: She thinks she’s the host of the show. Go ahead.

CALLER: My husband, for a total hip replacement for a Medicare patient, is reimbursed $1,250. Some of the fees that he’s reimbursed for is set under a dollar — under a dollar. I mean, if people think we’re making huge profits, they’re wrong. You know, the dirty little secret is, the hospitals are making the huge profits. A total hip costs the hospital $8,000, just the hardware to put in, and the charge to the patient is $32,000. There’s your markup.

RUSH: Wait a second. And the doctor, you said, gets what?

CALLER: $1200. That’s for a history and physical, the day of the surgery, three days in the hospital visits, and follow-up for three months.

RUSH: Now, what did you say, that you do the books for the doctor’s office?

RUSH: Is your husband a doctor, or did I hear you incorrectly?

CALLER: Yes, my husband’s a doctor, and from our heyday 10 or 15 years ago, our income is down by two-thirds.

CALLER: They’ve already cut us. The doctors already aren’t making it. I mean, I have a son who just is finished medical school, and I don’t know how you deal with it, and Obamacare never did deal with it.

RUSH: Seriously, now. You’ve got to be careful how you explain this to people. Because of what Obama and the Democrats have done, you’re not gonna find sympathy. You’re gonna find people who think, “It’s about time you find out what it’s like because you’ve gotten rich treating the sick! It’s about time you experience the pain all of us are suffering out here.”

They’re not gonna be sympathetic to you. Well, some people. People in your socioeconomic group can understand it. But average, ordinary people are not gonna have any sympathy for you. That’s one of the many unfortunate realities of the success Obama has had in propagating this culture war of his.

CALLER: Yeah, but I would say that this link to the New York Times and how much your doctor makes money, I think it could put a dent in it. It shows that we’re not ripping people off. In fact, honestly, I don’t know how long we can continue to work at these wages. It’s not worth it.

RUSH: Well, what if you went private? What if you punted all of that and just said no more Medicare patients?

CALLER: Yeah, the government makes it very difficult for you to leave Medicare.

RUSH: Okay, so fine. It’s not profitable anyway, so why don’t you just bump out of it?

CALLER: No. That would be fine, but Medicare people still would want to see us, and receive a balanced bill, but we’re not allowed to do that for two years.

RUSH: I know. So you have to tell ’em that Obamacare rules don’t permit you to treat them anymore.

RUSH: Yeah. Okay, folks, I just want to caution you. Class envy being what it is, a lot of people are gonna be glad. You know how Obama and the Democrats have always wanted their voters to feel good when others experience pain. That’s how they promulgate tax increases for the rich.

All these people that are not rich are supposed to be happier when others get tax increases. It doesn’t help their lives. It doesn’t improve their lifestyle at all. But they’re supposed to say, “Yeah! Yeah!” because Obama and the Democrats are getting even with ’em. I just want to warn you: The health care industry is nothing to monkey with. When you need treatment, you want it from the best that you can get, and those people are at risk right now.

RUSH: Our last caller said something fascinating, and I think it’s true of most hospitals; of course, not all. Actually two interesting things here. She said that the doctor in a hip replacement gets 1200 bucks, and that the actual hip replacement mechanism costs eight grand and the hospital charges $32,000 for it. So obviously the hospital would be the primary profiteer in that arrangement.

Now, the hospitals were all-in for Obamacare from the get go. In fact, folks, so were the doctors, at least enough doctors to make it look like that. Remember all those Rose Garden press conferences, all those people in white coats that were standing behind Obama? Now we found out some of them weren’t doctors. They were out of central casting and the Regime had to send some people out to get some white lab coats for ’em. 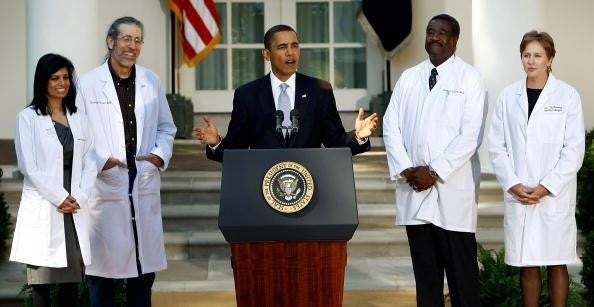 But nevertheless when this was all brand-new… Think back here. I’m reliving the frustration, ’cause here are these people that are behind this. “Do they not know?” I’m asking myself. “Do they not know they are the targets? Do these doctors lining up behind Obama in the Rose Garden helping him create a picture of support for whatever Obama is saying about how he’s going to save, rescue, transform, improve health care, know?”

There were the doctors standing right behind him, a bunch of them in white coats. I remember asking myself, “Do these people not realize that they are the targets?” Now, again, some of them weren’t doctors. They were just made to look like it. The Regime phonied some of ’em up. But there were some doctors that got on board. I am… (big sigh) I guess it’s “haunted.”

I’m reliving some of the genuine anger and frustration I felt back then, people not understanding what they were in for here. It’s like the insurance companies signed on, they were all in, like crony socialism. The doctors made it look like support. There were enough to make it look like they were all-in, and then the hospitals came along, and then AARP. I’m looking all this and saying, “Sellout here. Sellout there.

“He’s got a bunch of people selling out the country for what they thought was going to be personal gain,” and I understand the allure. The president calls either you or your association, and you’ve got a chance to go to the Rose Garden. You’ve got a chance. The president wants to fix your business, and you want to be in close to power. It’s gonna help you! I understand the lure of it all. 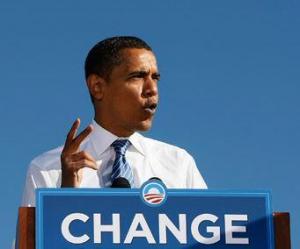 I just remember the doctors, enough of them, creating enough photo-ops to make it look like they were all-in on this. They didn’t even whimper. They stood behind him in their white coats, and they organized and supported Obamacare. Now look at it. Now Obama wants them to essentially be government employees. This hospital profit business? There’s no denying that aspect, as our previous caller said.

I mentioned yesterday that I went to watch cochlear implant surgery, and the doctor gave me the address. Kathryn and I went. They gave us the address about a week before. I said, “Wait a minute, this is not a hospital. This is near a mall! Whoa, what’s this?” So we get there, and it’s this massive — big, not as big as a hospital, obviously — surgical center. I asked around, and I found out.

It’s amazing how the free market works. I found out that surgeries in this place are dramatically cheaper than surgeries taking place in a hospital. (interruption) “Plus,” did you say, or “and”? Plus? (interruption) Well, look, I don’t want to get into that. I got people yelling, “Yeah, you tell ’em you get staph infection at the hospital!” I’m not going there. I understand all of that.

It’s just the existence of these surgical centers, these hospitals… How did all this become possible? My contention is, it became possible because people (the patients) never knew what anything really cost, because the insurance company or somebody was paying for it. They never really knew. Now, some of them had insurance. For catastrophic, they knew, if their copay was something high, depending on what their deductible was and all that.

But for the most part what medical care really cost, people didn’t know, and now they’re finding out. But enough people, enough people knew these surgical centers have popped up all over the place. You can get surgery not in a hospital, and it’s remarkably, demonstrably cheaper and it’s largely outpatient. But if you have to spend the night some of them you can. I’m sure you know what I’m talking about.

It doesn’t help that many employees at hospitals are members of the SEIU, either, Obama’s favorite union. So the fix has been in from the get-go on this. With the government and insurance companies working together to pay bills, people didn’t really know what things cost. Now all of a sudden the cost of things is being learned, and there’s an accompanying outrage right along with it.