RUSH: Don in Syracuse. Great to have you, sir. Hello?

CALLER: How are you Rush? Mega dittos.

CALLER: First-time caller. I got your book for Christmas, Rush Revere.

CALLER: My five-year-old, I wanted you to know, start reading ’em basically like a novel. It’s something that we could read continuously every night.

CALLER: Five years old. At the end of the book, when you have that question — not the test, just the quick question right at the end about who taught Tommy how to sword fight, he immediately answered it. Immediately. As a parent, I thank you so much for that book.

RUSH: You know, hang on a minute. We just hit the break time. Don’t hang up.

RUSH: Back now to Don in Syracuse. Don, you know, I’m so grateful, first, that you got through. Getting through calling this program is really a tough thing to do because so many millions of people are trying. I can’t tell you — I can’t adequately describe — the good feeling I get from hearing this. A five-year-old who loves the book, who wants to hear from it every night, and then wanted to take it to kindergarten.

CALLER: I think it should be. I honestly didn’t know how he was going to do it. Because we were doing, you know, books that took about five minutes to read.

RUSH: Well, yeah, for a five-year-old, that makes sense. But this is a novel.

CALLER: Right. When I explained to him this was gonna be a long book and everything, he just kind of looked at me. After the first night, you could see he was so, like, into that book. I couldn’t believe it. Like I’ve heard people on here say stuff, and I kind of said to myself, “Ehhh, I don’t really know. He’s going to talk up on it.”

RUSH: I know what you thought. Can I tell you what you thought? You probably said, “Come on, Rush, enough of the kids, okay? We get it. You got a book out there, but stick to the issues,” something like that. Now your child has encountered the book and can’t get enough of it.

CALLER: Can’t get enough! When we finished the book, he immediately picked up that you had a second book. (laughing) He asked if they were gonna go somewhere else. (laughing) You know, “Where are they going next, the kids in the book?”

RUSH: Well, let me take the occasion of your call here to learn something. What is it do you think…? Were you able to ascertain what he likes best about it?

CALLER: Like I said, when we picked up on it the next night, I would ask him, “Do you remember what happened?” He immediately would say whatever Liberty had said, you know? I would kind of coax him a little bit into remembering, and he would remember. I mean, we may not have read the book for three nights and he would remember. We talked about it a little bit more, what we had talked about on the previous night. I am just so thankful. It’s a great connection for him and I to have father-and-son time together. I love reading. I’m so happy that he’s into it. The most important part is that he took what he learned and went to school with it.

RUSH: It sounds like he wanted to take it to school.

CALLER: I’m pretty sure he convinced the teacher to let him bring it in.

RUSH: Five years old we’re talking about here. You gotta forgive me, here, you stick-to-the-issues people. This is just too amazing.

CALLER: I think that what you’re doing for our kids is awesome, Rush, and as a parent I so much appreciate it.

RUSH: Well, thank you. Thank you. It’s so unfortunate what they’re being taught.

RUSH: You know, he’s gonna be taught exact opposite of what he’s learning in these books.

CALLER: I mean, as a parent there are ways to counter it. I don’t want to start any arguments with anybody, but —

RUSH: It’s gonna be interesting. As he gets older he’s gonna go to school, they’re get into Pilgrims, and they’re gonna tell him a bunch of garbage about it, and he’s gonna have this book as his first learning experience. I’m sure you’ll prep him for it, but he’s still gonna be little confused, and he’s gonna say, “Wait a minute. No, no, no, because I read that…” Wherever he goes, they may trash the book. “Well, you can’t believe what that author writes, Little Timmy,” blah, blah, blah.

CALLER: Well, I did show him in the back where you got all your information from. I did explain it to him that you didn’t just make it up. Yes, there is no such thing as a talking horse — sorry to break it to everybody — but a lot of the information that you did put in the book happened. You gave where he could find that. I mean, to me, when you say something to somebody and you can back it up with proof, that’s really what I think hits home.

CALLER: No, we’ve got the one book, the Rush Revere and the Brave Pilgrims.

RUSH: Ohhhhh! Okay, cool. Well, here. Tell you what. What is your son’s first name? 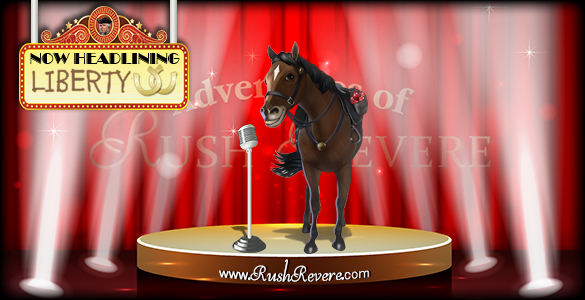 RUSH: Hunter. Okay, I am gonna send you the audio versions read by me, unabridged, to both, and I’m gonna send Hunter the second book, autographed by Liberty.

CALLER: He will freak out.

RUSH: Well, Liberty’s starting to get a little big-headed and protest all these autographs he has to sign, but I get his mind right. We had a photo session with him the other day, and he demanded to put on a suit and tie. I’m telling you, we’re losing control with the guy. But, anyway, if you’ll give Mr. Snerdley an address then we’ll get all that stuff out and we’ll make sure Liberty signs the second book to Hunter.

CALLER: Rush, I appreciate it so much. Thank you from my family. Thank you so much.

RUSH: You can tell Hunter that there’s gonna be a third book, too. But don’t tell anybody else. Just keep it between us.

CALLER: I’ll wait ’til I get home to let him know.

RUSH: Keep that between us. Okay, thanks, Don. I really appreciate it. Don’t hang up.

They began teaching literal lies, all oriented around the fact that this country was founded in an unjust and immoral way — and the country was, as such, illegitimate. We now have a president who came from that mode of education, and we have an administration populated with people who also believe that, because they were chosen by this president.

That is what we’re up against. We are up against people who are teaching anti-American history. The Blame-America-First Crowd has taken over the curriculum, all the way back to kindergarten but mainly elementary and into high school. Of course, it goes into the institutions of so-called higher learning. I think it is the issue, and it’s crucially important.